Civil rights movements paved the way for the future of social progression, and we still build on those ideologies today. Learn more about 'Brown v. the Board of Education,' affirmative action and state, and civil rights initiatives regarding housing, voting, and school transportation. Updated: 11/05/2021
Create an account

When discussing the legacy of the civil rights movement, let's start with education. After all, it was the landmark Brown v. Board of Education case that jump started the civil rights movement in the 1950s. The case brought about the abolition of the practice of separate but equal, which had enabled many of the segregationist laws of the period. The separate systems had caused devastating effects on African American school children, and this had to be changed. It was clear that assistance was needed for people to have a chance to catch up from the impact of institutional racism. 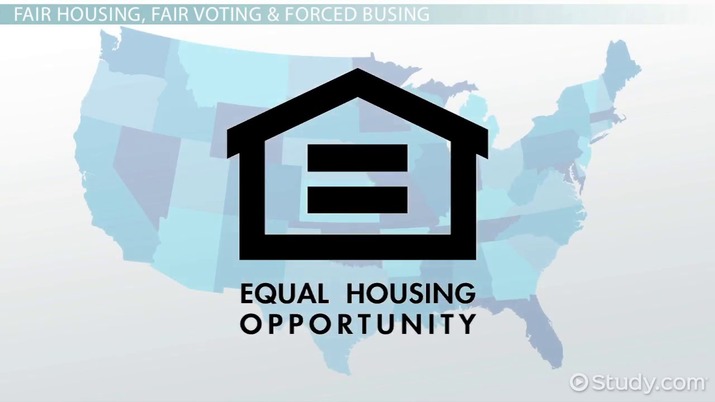 Coming up next: What is Segregation? - Definition, Facts & Timeline

One of the ways to do this was through affirmative action programs that would provide preferential treatment to people in minority groups who had been excluded in the past. Signed into law in 1961 by President John F. Kennedy, the idea was furthered in 1965 by Lyndon Johnson. At first, the policy sought to only remove the possibility of discrimination, but with the expansion came official encouragement to ensure diversity. In doing so, the policy hoped to fix the vast differences for people in high-achieving roles that had previously been excluded. Also of note was that, by the end of the 1960s, affirmative action could be applied to advance the cause of women as well.

These programs have not been without controversy, however. A number of challenges have been issued against the constitutionality of affirmative action, saying that it did not grant equal protection as guaranteed under the 14th Amendment.

The Fair Housing Act was also passed as part of the Civil Rights Act in 1968. This act forbade people from discriminating against individuals when dealing with housing, whether as landlords or as realtors. Before then, people in minority groups had been steered to separate neighborhoods as a result of racism, even if they had the financial resources to live in the area of their choice.

As far as voting, many people were being intimidated from going to the polls because of the color of their skin. The Fair Voting Act of 1965 sought to correct this by outlawing intimidation or pre-voting tests, like literacy tests.

Another idea was desegregation busing, or the practice of assigning and transporting children to different schools regardless of the neighborhood in which they lived. It was sought as a way to speed along desegregation of school districts and allowed children to attend schools out of the district where they lived.

Many people resisted these laws and changes, and some further negative results occurred. The message was spreading, however, that segregation would not be tolerated and civil rights were imperative.

Following the Civil Rights Act of 1965, a number of measures were enacted to limit the ability of segregation to continue in the future. As education was a constant theme of the civil rights movement, it is not surprising that many of the initiatives dealt with education. While affirmative action succeeded in raising the visibility and accessibility of people in roles that had previously been denied to them, it gained the criticism of others who felt that the 14th Amendment was being violated. Other initiatives, such as the Fair Voting Act and the Fair Housing Act were also put into effect. Finally, a plan like desegregation busing was another idea to try to allow more diversity at different schools.