Legionnaires' disease is a disease that causes severe lung inflammation due to an infection from the Legionella pneumophila bacterium. Learn about the lung disease bacterium, Legionella and amoebae, and the cause, symptoms, prevention, and treatment of this disease. Updated: 09/24/2021
Create an account

In ancient times, a Roman legion was composed of thousands of extremely well-trained and well-equipped soldiers. This incredible fighting force conquered most of the known world and helped spread around a lot of incredible technology and ideas to far-off places. However, what I'm going to talk to you about in this lesson spreads disease instead of life-giving ideas. It's a little bacterium that causes people some serious lung issues. 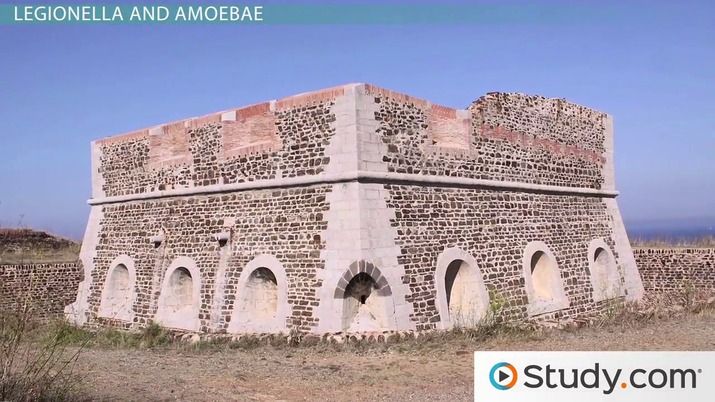 The reason this bacterium is called pneumophila is because this bacterium loves (-phila) to cause problems in the lung (pneumo-). In addition, it's aerobic because it needs oxygen for growth and is Gram-negative because it has a very thin cell wall compared to Gram-positive bacteria.

One other cool thing to remember is that the way by which this bacterium spreads and infects people is a bit more unique than most other bacteria or even viruses you have heard of. First of all, this disease is not spread from person to person. Instead, people acquire this infection when they inhale particles of water in the air that contain this bacterium. Great places for breathing in vapor chock full of Legionella bacteria include hot tubs, infected humidifiers, shower systems, nebulizers, and so on.

Another interesting thing about Legionella bacteria is how they use other life forms to their advantage, not unlike soldiers in war.

The Roman legion I mentioned before was an incredible fighting force not only because of its supreme offensive strategies but also because of its incredible defensive techniques. For example, Roman soldiers used to live in highly protected forts and during a battle enclosed themselves in a formation called a tortoise in order to give them added protection against an onslaught.

Likewise, Legionella sometimes use their own techniques, most notably through the use of amoebae, to defend themselves against the outside world. Amoebae are single-celled protozoans in which Legionella love to live because it offers them protection.

You'd think that this isn't a serious concern. Oh, but it is, because disinfectants that are strong enough to kill bacteria, such as Legionella, may not be strong enough to kill protozoa. This means that if you are cleaning your house or some kind of equipment in order to get rid of Legionella and you don't take into account the chance that some of these bacteria may be hiding within amoebae, you'll be in big trouble.

If you manage to get infected by Legionella pneumophila, you might be in even bigger trouble. While most people exposed to this bacterium do not suffer any problems, those who do get ill and aren't treated properly with antibiotics may suffer from severe fever, fatigue, muscle aches, pneumonia, lung failure, and even death.

There is no vaccine for this disease; hence, other preventative strategies must be used. Therefore, it's important that anything that can carry this bacterium be properly maintained. Cleaning hot tubs, chemically treating water systems, and so on is of supreme importance, especially during an outbreak of Legionnaires' disease.

The reason it is called pneumophila is because this bacterium loves (-phila) to cause problems in the lung (pneumo-).

Also, don't forget that Legionella sometimes use amoebae to defend themselves against the outside world. Amoebae are single-celled protozoans in which Legionella love to live because it offers them protection from disinfectants.

What is Diphtheria? | Causes, Symptoms & Treatments