Jennifer has an MS in Chemistry and a BS in Biological Sciences.

View bio
In mathematics, the less-than symbol is used to represent the inequality of one number being less than another. Learn about the language of math, the symbols for greater than and less than, and explore how to solve inequalities through mathematical problems and applications. Updated: 09/07/2021
Create an account

The Language of Math

Mathematics is a language that uses many symbols. Learning all the symbols can be tricky, but it's critical for understanding what is being communicated, just like learning words and the rules for grammar is key to speaking and understanding a foreign language, like Spanish. 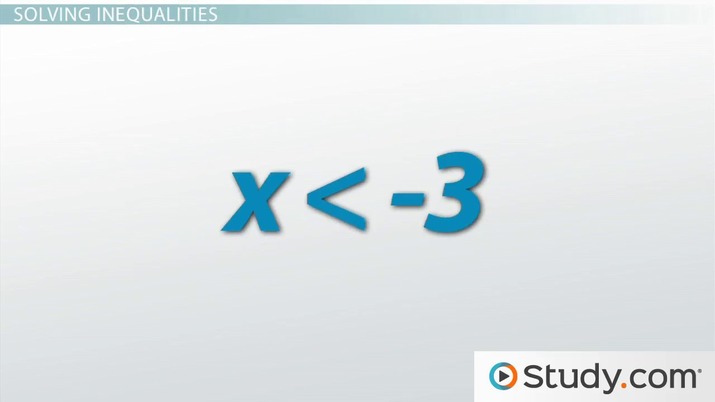 Coming up next: What are 2D Shapes? - Definition & Examples

Greater Than or Less Than

When two things are the same in every way, they are said to be equal. When two values are not the same, there is an inequality. In math, problems most often center around equations of numbers that are either equal or unequal. If the equations or numbers are not equal, it stands to reason that one of them is bigger than the other.

You may remember learning to use these symbols with the aid of an alligator when you were younger. The alligator is hungry, and so he opens his mouth towards the bigger number.

Subtract a 2 from either side to get:

Finally, dividing by 2, we have:

You can see that solving an inequality is very similar to solving an equation. One important difference is our solution is not a single value. In this example, our solution includes all values less than -3.

Inequalities are common in everyday life. Many real-world examples of problems involving inequalities have to do with money. Sometimes you need to determine if you have enough money to purchase a specific item, or you may need to determine how much of something you can buy with the money you have. Here is an example in which understanding the less-than principle comes in handy:

Max wants to buy some t-shirts online. The t-shirts are $10 each and shipping will be $15. He only has $100 available to spend. How many t-shirts can he buy and stay within his $100 limit?

To solve this inequality, you first need to write an equation. Let x equal the number of t-shirts and the inequality should look like this:

This inequality states that $10 times the number of shirts plus $15 for shipping has to be less than the $100 Max has available to spend.

If you solve the inequality, you'll come to the solution x < 8.5. This means that the number of t-shirts Max can buy will be less than 8.5; he can purchase 8 t-shirts under his budget (since he cannot buy a fraction of a t-shirt). This is a simple example, but more complicated less-than/greater-than problems are tackled every day by finance professionals, architects, builders and people just living their daily lives.

View this video lesson, then assess your capacity to:

Applications in mathematics are often shown using word problems. Many students struggle with rewriting the words into math. In the following examples, students will practice translating real-world situations into inequalities and then will solve the inequalities.

1) You want to purchase some DVDs from a website. Each DVD costs $12.00, and shipping costs $6.99. You have $50.00 that you can spend. Write an inequality representing the situation and solve for the number of DVDs you can purchase.

2) Your favorite cereal is on sale at the grocery store for $2.25 per box. Sales tax is 6.5%, and you have $15.00. Write an inequality representing the situation and solve for the number of boxes you can buy.

So you can buy at most 3 DVDs.

So you can buy at most 6 boxes of cereal.

So you must drive less than 36 miles.

What is Regrouping in Math? | How to Regroup Numbers