Today's lesson will be a rather simple one as we take a look at what anthropologists like to call the different layers or levels of culture. In studying this topic, we'll become amateur anthropologists, people watchers if you will, taking a look at how the concept of culture plays out across our society and our world.

For starters, culture is defined as the set of learned behaviors and beliefs that characterize a society or people group. Simply put, it's what makes a people group a people group. It's their beliefs, attitudes, and ideals. It's their art, their religion, their clothing, their diet, their entertainment... It's all that makes them them!

When studying culture, most anthropologists choose to break down this broad concept into layers. The three most common layers usually delineated are international, national, and subculture. 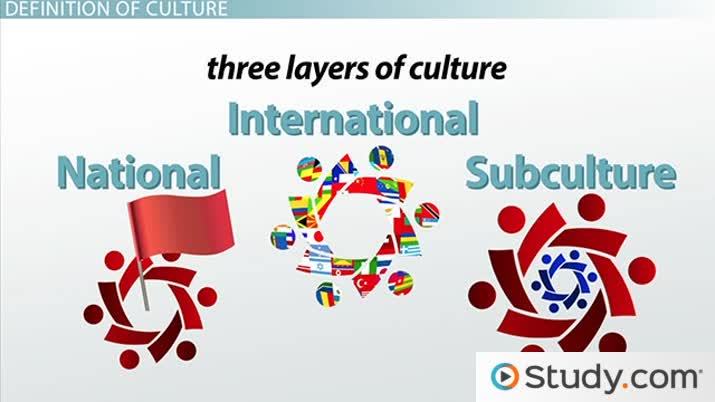 Coming up next: Understanding the Difference Between Society & Culture

Marriage is an excellent example of international culture because it's practiced by people groups all over the world. Whether they say 'I do' in English, French, or Swahili, people all over the globe enter into the union of marriage. Yes, the outfit the bride wears may differ depending on her country, and the ceremony may look very different depending on the couple's religion, but the basic premise remains the same. At the end of the day, whether the bride wore white or brightly colored silks, a marriage has begun, and on any given day, it's happening all over our globe.

Our next layer of culture is national culture. As you can probably guess from the name, this represents the beliefs and practices shared by the citizens of the same nation. It's what makes an American an American and an Italian an Italian.

To highlight the idea that culture is made up of layers, we'll again use marriage. As we've already covered, marriage is part of international culture. However, how it plays out in different countries is a great example of national culture. For example, if you are going to a Christian wedding in the United States, you'll most likely be attending the festivities on a Saturday or maybe even a Friday night.

However, not many American weddings take place on a Sunday, but very traditional Italians believe Sunday is the luckiest day to marry. According to old time Italian traditions, Saturday weddings were to be reserved for widows who were remarrying, not first time brides and grooms.

Although many modern Italians no longer hold to these ideals, they still have a part in the traditional, national culture of Italy. On a similar note, and another example of national culture, traditional Chinese wedding dates were often chosen by an astrologer who used the bride and groom's birthdays to figure out the luckiest day they should wed.

With this, we come to our last layer of culture, subculture. Subculture is often defined as the beliefs and attitudes that separate groups within the same broad culture. As a layer of culture, subculture is often made up of differences in religion, socioeconomic status, and even race. As Americans, we are very familiar with subcultures. One needs to only spend a day in New York City to experience the subcultures of places like Little Italy, Greenwich Village, and Chinatown. Yes, many of the people you see there will share the national culture of being Americans, but they may differ in how they dress, what they eat, and how they worship.

Again hitting on the idea that there are layers to culture, we'll again use our example of marriage. As we've already highlighted, marriage is part of international culture. However, it also plays out differently depending on one's national culture. Taking this a step further, marriage also differs at a sub-cultural level. To explain this one, I'll use my own family.

Growing up as a child in the Northeast of the United States, most of the weddings I attended as a child were what you'd call, or maybe I should say, what I'd call, very traditional. The brides wore very fancy white dresses, and the grooms wore tuxedos; even the guests were dressed to the nines. Organs, pianos, or orchestras played, and afterward, there were usually very fancy meals. I must admit, as a child, I found them very boring, but that's how the subculture in which I was raised did weddings, so I suffered through them.

One day, when I was about nine, my family traveled to another region of our nation to attend a family wedding. Knowing what I knew about weddings from my Northeastern subculture, I was not too thrilled about spending the day at one. However, when I got there I was very pleasantly surprised! There were no organ players or women dressed in long gowns telling kids to be quiet. Instead, the wedding was held outside on benches, and instead of orchestras, there were banjos! Instead of an uncomfortable-looking tuxedo, the groom actually wore jeans!

When the wedding was over and my cousins started running around playing tag while the picnic tables were set for the reception, I was both ecstatic and floored by what I saw! To the nine-year-old me, it was the best wedding I had ever been to. Needless to say, I was totally digging the subculture of my extended family.

However, for my mom, who grew up in a very different sub-culture where young ladies didn't run while in dresses and gentleman never wore jeans to special events, it was a whole lot to swallow. Yes, she shared the international culture of my relatives, and she even shared the national culture of being an American, but the subculture of wearing jeans and playing banjos at a wedding were, shall we say, a bit too much for her sensibilities.

Fortunately, my mom was a great sport. Once we all changed out of our overdressed fancy clothes, she and my dad had a lovely day visiting and celebrating with the bride and groom. Yes, I had been to weddings before, but their way of doing weddings, playing tag, and getting dirty, was the coolest way I had ever seen! To put it mildly, I was totally digging their subculture!

Culture is defined as the set of learned behaviors and beliefs that characterize a society or people group. When studying culture, anthropologists often explain it as existing in three layers. They are international culture, national culture, and subculture.

International culture is culture that extends beyond national borders. It is shared by people across oceans and continents. It transcends race and geography.

National culture represents the beliefs and practices shared by citizens of the same nation. Simply put, it's things like diet, entertainment, and family practices that make an American an American and an Italian an Italian.

Last, there is subculture. Subculture is often explained as the beliefs and attitudes that separate people groups within the same broad culture. As a layer of culture, subculture often encompasses differences in religion, socioeconomic status, and even race. An excellent example of this are places like Little Italy and Chinatown, which exist within the national culture of the United States. However, going beyond race or ethnicity, subcultures can also be based on geographical regions within a nation.

When the lesson is finished, you should be able to:

Balkan Peninsula Conflict | What are the Balkan States?

Waste Management in the Hospitality Industry

How to Create a Marketing Mix for Individual Cultures & Countries

Characteristics of the International Manager in Global Organizations

Cultural Iceberg Model & Theory | What is the Iceberg Theory?

What is New Leadership Theory?