Tom has taught math / science at secondary & post-secondary, and a K-12 school administrator. He has a B.S. in Biology and a PhD in Curriculum & Instruction.

Will has a doctorate in chemistry from the University of Wyoming and has experience in a broad selection of chemical disciplines and college-level teaching.

View bio
A lever is one of the most common tools we use to help us lift things beyond our strength limit. Learn about the components of a lever, find out about three different lever classes, and see some common examples of each. Updated: 12/26/2019
Create an account

How to Lift a Boulder

You're out in the woods with nothing but trees, rocks, and your dog. Fido has just gone into a cave when a giant boulder tumbles down, covering the entrance to the cave. You try to move the rock, but it doesn't budge. That's the bad news. The good news is that, not only do you have all the things you need to move that rock, your bad luck is the perfect scenario for this lesson. In this lesson, you'll learn how levers make us stronger. 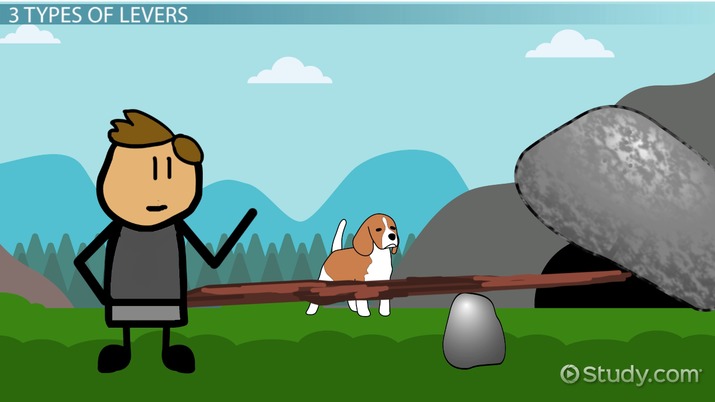 Coming up next: Mechanical Advantage of the Wheel & Axle

What Are Simple Machines?

A lever is one of the six types of simple machines, a list that also includes wedges, the wheel and axle, the incline plane, screws and pulleys. What does a simple machine do? It takes an input force (a push or a pull) and changes its magnitude and/or direction into an output force onto a load. For example, an axe-head (which is a wedge) takes all of the downward (input) force we can muster and concentrates that input force into the narrow area of axe-blade impact, which increases the force at the point of load (the point of impact with the wood). The direction of the input force is changed from straight down to horizontal, pushing the piece of wood apart. The degree to which input force is increased is called mechanical advantage.

Levers are varied, but all have a few components. They all have an arm, a straight, relatively inflexible part, like the handle of an axe or the entire length of a see-saw, that needs to be unbreakable and relatively unbendable. They also have a fulcrum, or pivot point on which the lever rests and pivots. A basic lever is the see-saw, where the board on which people sit is the arm, the pivot on which the boards sits is the fulcrum, and the contact point of the see saw with the ground is the load.

Perhaps the most important characteristic of a lever, aside from the assumption that your lever arm won't snap or bend, is the distance of the input force or load from the fulcrum. Without getting too much into the mathematics, torque is force multiplied by distance, and is crucial to levers working. Consider the see-saw from the earlier image. If the kid and the adult are nearly equal distances from the fulcrum, the kid won't be able to lift the adult. If torque = force x distance, a kid with a weight of 50 pounds who is 4 feet from the fulcrum will produce 200 lbs-ft of torque.

There are three types of levers, depending on the placements of the input force, the load, and the fulcrum. A Class 1 lever has the fulcrum between the input force and load, just like the see saw example we have been using.

A first-class lever could help you retrieve your dog (had you forgotten about him already?). You could find a stout branch to use as the arm and a rock to use as the fulcrum. Hooray, physics!

Other examples of first class levers include a crow bar and rowboat oars.

To increase the torque from your input force, you can increase your distance from the load. A wheelbarrow with 75-foot long arms would be immensely easy to lift, no matter what the load in the bucket, though a little unwieldy. However, a more realistic option is to do your best to load the heaviest items in the front of the wheelbarrow, nearest the wheel (fulcrum). The same is true if you want to have an easier time rolling your pop-up handle luggage through the airport - heavy stuff at the bottom (closest to fulcrum, farthest from input force).

Ever flicked peas at a sibling or friend using a spoon? Liar. Of course you have. When you did, you used a class 3 lever. A class 3 lever is a lever that has the input force in between the fulcrum and the load. Other examples of 3rd-class levers include baseball bats, lacrosse sticks, and golf clubs (and a bunch of other sports sticks). These levers are often not as easily recognized as other types because the fulcrums and input force points are fluid. When swinging a golf club, the top hand when the ball is being hit acts as the fulcrum, while the bottom hand is the point of the input force. The ball is the load, of course.

Levers are a simple machines that can be used to increase input force to lift or put pressure on objects, called loads. All levers have a few components in common: an arm, a straight inflexible part, and a fulcrum, or pivot point on which the lever rests and pivots. A basic lever is a see-saw, where the board on which people sit is the arm, the pivot on which the board sits is the fulcrum, and the contact point of the see-saw with the ground is the load. Torque is the combination of distance and force, and higher torque allows greater amount of work to get done. Three different types of levers exist, depending on where the input force, fulcrum, and load are. A class 1 lever has the fulcrum between the input force and load. A class 2 lever has the load between the fulcrum and input force. A class 3 lever is a lever that has the input force in between the fulcrum and the load.

This lesson on levers is designed to prepare you to achieve these objectives:

Obtain a Popsicle stick, 10 or so steel nuts and a small solid semisphere such as half of a plastic Easter egg or a small bouncy ball cut in half (anything that can be used as a fulcrum so that the Popsicle stick balances well on its central point).

The fulcrum should be short enough that the Popsicle stick touches the table when placed on it and behaves like a see-saw.

Understanding the Efficiency of Compound Machines