In this lesson, learn the exciting life cycle of the owl. Experience each stage in detail as we follow an owl from egg to hatchling to nestling to fledgling to adult!
Create an account

It's the Circle of Life

Every living thing follows a circular journey through life, known as a life cycle. A small tree sprouts, grows tall, drops seeds, and from those seeds a new tree sprouts. It's the same with you! You were a baby, then a toddler, now a child. Eventually you'll be a teenager, then an adult. As an adult you may have a baby, and the cycle starts again. So let's examine each step of an owl's journey through life. 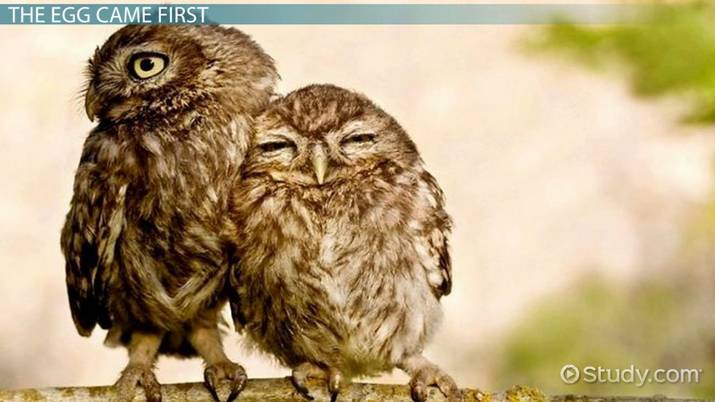 Coming up next: Birds Lesson Plan for Elementary School

An adult male and female owl will mate. Then the adult female owl will lay eggs. The number of eggs laid depends upon the type of owl. Larger owl types will lay only one or two eggs, whereas smaller owl types may lay over ten eggs. On average, an owl lays around three or four eggs over a period of a couple days.

Once it emerges from its egg, the new owl will go through several stages.

First, the owl is a hatchling. A hatchling is any animal newly hatched from its shell. In this case, it is a tiny baby owl! Hatchlings do not have feathers, but are covered in a fluffy substance called down. The hatchling is much like a human infant; it is not able to see well, takes lots of naps, and is completely dependent upon its parents for food. In fact, the parents may feed the baby owl over 10 times in one day, tearing larger pieces of prey into smaller bits so the hatchling can eat it.

After a few days, the hatchling becomes a nestling, which is a stage much like a human toddler. A nestling is any baby bird that is still confined to the nest. An owl is a nestling for one to four weeks after hatching. A nestling still naps, but not as often. The nestling has better eyesight as well. Lastly, the nestling is able to swallow smaller prey, like mice, whole! However, like a toddler, the nestling is still entirely under the parents' care since it's still too small to defend itself or even fly.

Finally, after four to ten weeks since hatching, the little owl will become a fledgling, or a bird learning to fly. A fledgling is like a teenager. It looks almost like the adult version of itself, meaning the owl now has mostly feathers, instead of down, covering its body. But the wings and tail are shorter than an adult owl. A fledgling can begin to find food on its own, and has a higher energy level, which means no more napping! Parents usually tend to the fledgling for a few more weeks to months before sending it out of the nest completely.

All Grown Up: The Adult Owl

One year after hatching, most owls reach their adult size. Now, it is the adult owl's turn to go find a partner and mate. Once mated, the female owl will lay eggs and the cycle begins again!

In summary, the life cycle of an owl has five stages:

Once the adult owl has mated and laid eggs, the cycle starts all over again.

Life Cycle of a Spider: Lesson for Kids

Life Cycle of a Dog Lesson for Kids

Life Cycle of an Emperor Penguin: Lesson for Kids

Life Cycle of a Turkey: Lesson for Kids

Life Cycle of a Cat Lesson for Kids

Life Cycle of a Rabbit: Lesson for Kids

Life Cycle of a Bee: Lesson for Kids