The Civil War didn't just change life in the Southern states. The North also changed after the war, thanks to wartime advances in industry and technology and the movement for racial equality in the postwar years.
Create an account

Reconstruction - A Time of Change

When the Civil War ended in 1865, America entered a period called Reconstruction. Reconstruction was the national effort to reintegrate the North and the South so they could function as one nation without slavery. The war left the Southern economy devastated, and since it had been based on slavery in the first place, the entire economic structure had to be rebuilt. Millions of newly emancipated slaves also had to be integrated into society as free people.

During Reconstruction, the South saw a temporary period of military government and tremendous social upheaval. But as we will see, the period after the Civil War also brought significant changes to the North. Wartime economic growth changed the way people lived after the war, and with the end of slavery came the beginnings of the Civil Rights Movement that would come to life a whole century later. 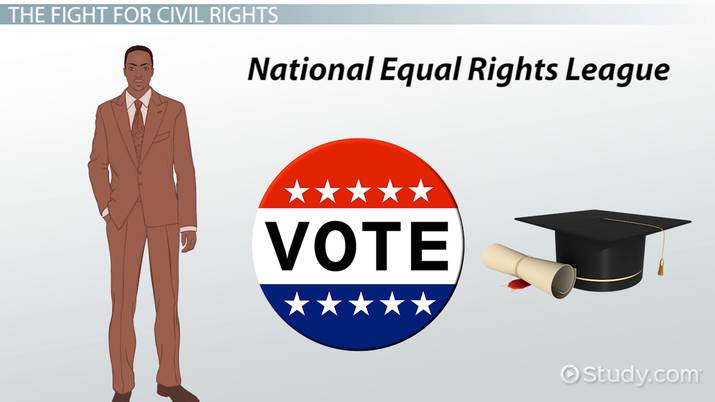 Coming up next: Status of African Americans from the Civil War Onwards

From Agriculture to Industry

The North had already been more industrialized than the South at the start of the war, and the demands of wartime accelerated the transition in the North from an economy based on farming to one based on manufacturing. While the agricultural, slave-based Southern economy was devastated by the war, the Northern economy benefited from development in many of its industries, including textile and iron production. The war also stimulated the growth of railroads, improving transportation infrastructure.

The increasing importance of industry also provided an indirect benefit to education. After the war, Northerners benefited from wartime legislation, like the Morrill Act, which granted land to the states for technical colleges that would teach important skills for the new economy. Other improvements to the new industrial society included the wider spread of telegraph lines, initially justified by the need for swift military communications. After the war, these telegraph lines made for easier civilian communication across the growing country, and the quicker spread of news all around the nation. The mass media as we know it was gathering steam.

Admittedly, the war also demanded some economic sacrifice in the North. The Northern government had funded its military by raising taxes and borrowing money. People living in the North emerged from the war paying income tax for the first time. Like the South, the North had also printed additional paper money. The value of this money fluctuated during the war, causing some economic instability. But despite the stress of wartime, the enormous industrial and economic expansion allowed the North, and eventually the whole country, to grow into the industrial power that it is today.

The Fight for Civil Rights

The economy wasn't the only thing that changed for people in the North after the Civil War. The fight for racial equality during Reconstruction changed Northern society as well as the South. These social movements were less disruptive to the basic structure of society in the North than they were in the South, and they did not provoke the same level of widespread violence, partly because there were fewer Black people as a percentage of the population. But Northerners did have to grapple with many of the same issues.

Even though less than 2% of the Northern population was Black, organizations like the National Equal Rights League pressured white politicians in support of civil rights, particularly voting rights, and educational opportunities for freed slaves. While they had not been enslaved before the war, African American citizens in the North still did not enjoy equal status with whites. They had been guaranteed equal economic privileges and equal status under the law by the Civil Rights Act of 1866, but these rights were slow to materialize. Especially after many Black soldiers had fought and died in the Union army, Black citizens felt they deserved the same rights after the war.

Black communities in Philadelphia also fought to desegregate the city's streetcars, foreshadowing the bus boycotts of the 1960s. Education was another important issue. Many Black activists in the North focused on equal access to public schools for Black children, another fight that would continue on into the Civil Rights Movement of the 1960s.

While they did not get all the social changes they wanted, Black people living in the North did make important gains after the war. One example is the Fifteenth Amendment, which allowed American men to vote regardless of their 'race, color, or previous condition of servitude.' This was obviously a big change for the South, but it was also a change for the North: Only seven Northern states allowed Black people to vote before it was passed.

Migration after the war also changed Northern communities. Many newly freed slaves moved from the South to the North and West, seeking economic opportunity in Northern industrial cities like Chicago and New York. Other groups founded towns in the West for ex-slaves. Migration from the South to the North and the West increased in the years after Reconstruction ended, when it became clear that the newly freed slaves had not gotten the opportunities they hoped for. The influx of Black immigrants to the North and West intensified racial tensions there and set off new struggles over housing segregation and pay discrimination.

After the war ended and during Reconstruction, the Northern industrial economy had made important progress, particularly in manufacturing and railroad-building. The struggle for political reform and eventual legal changes, like the Civil Rights Act and the Fifteenth Amendment, affected the North as well as the South. The migration of freed slaves from the South to the North and West also changed Northern society. Many of the major issues of the Civil Rights Movement in the 1960s, like segregated public transit, housing discrimination, and voting rights, were raised during this period.

Life in the North After the Civil War
Related Study Materials

How American Reconstruction Affected the North

Life in the South After the Civil War

The Costs of the Civil War: Human, Economic & Cultural