Ashley has taught first, fourth, and fifth grades and holds a master's degree in Curriculum and Instruction.

View bio
In this lesson, you'll learn about differences between the North and the South in pre-Civil War America. This lesson will focus on the differences in the economies. You will also learn about slave life in the South and ways slaves rebelled. Updated: 10/13/2020
Create an account

Differences in the North and South

Think about the last time you went to a friend's home. Does your friend's family do everything the same as yours? Probably not, even if they live right down the street. This is exactly what happened in our country before the Civil War. Different areas did things differently, and it divided the country. The United States was so divided that there was even a boundary, called the Mason-Dixon Line, an imaginary line that divided the country into the North and South. 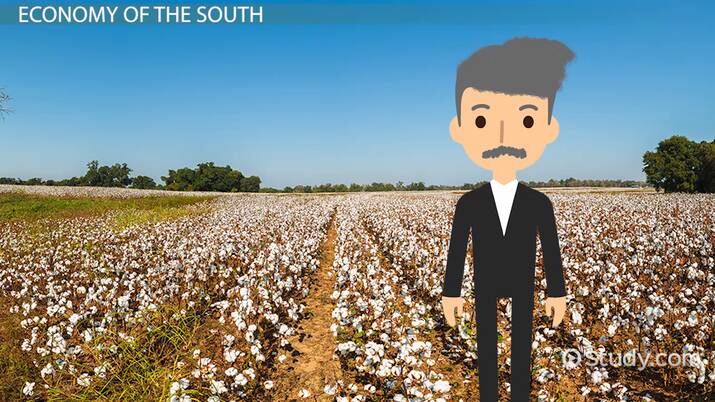 Coming up next: Missouri Compromise Lesson for Kids

Economy of the North

In the North, farming was important for a family's food production, but it was not a way of life. The rocky soil and climate in the area did not promote farming. This led the development of an industrial economy in the North, an economy in which manufacturing and textile development, fishing, and whaling were the primary means to gain wealth. Additionally, northern states and residents were very involved in the development of the railroad system in the United States. The diverse opportunities of the North allowed it to grow at a faster rate than the South.

Economy of the South

Unlike the North, the South relied on an agricultural economy, an economy in which farming was the primary means of wealth. In fact, here, wealth was frequently measured by how much land and how many slaves you owned. Plantations, or large farms, boasted hundreds of acres of land on which to grow cash crops, or plants grown that could be sold for cash. Mainly, plantation owners focused on growing cotton, indigo plants (plants used for their blue dye), and tobacco, which they could sell quickly and easily. Southerners just focused on selling their crops instead of creating and selling goods with the crops they grew.

As you're learning, the North and South did things very differently. Despite the differences, the North's economy was supported by the South's, and the South's economy was supported by the North's. Since the North had an industrial economy focused on manufacturing, it needed the crops grown in the South to produce goods. For instance, a northern textile factory would need cotton from the South to develop its fabrics. Therefore, many of the materials grown in the South were sold to northern industry owners.

Southerners would have preferred to sell to Europe, who paid more for the materials, but without multiple railroads, they found it difficult to move materials to seaports for shipment overseas. The North, on the other hand, was able to purchase crops and materials from the South, produce goods with those materials, and then sell the finished products to Europe and even back to those in the South.

While many people in the North did not agree with slavery, slaves were an important part of the South's economy. However, based on the cruel treatment of slaves in the South, you would have never known how much Southern plantation owners needed them.

Slaves were overworked, often to death, and could be bought and sold and separated from their family without notice. Because of the poor treatment, many slaves rebelled against their owners. A common form of rebellion was to run away from the plantation. Some slaves escaped and came back to help others do the same. Slaves would also riot against owners and destroy their cash crops.

The North and South, divided by the Mason-Dixon Line (an imaginary line that divided the country into the North and South), had different views on slavery and economy. The North had an industrial economy, an economy focused on manufacturing, while the South had an agricultural economy, an economy focused on farming. Slaves worked on Southern plantations to farm crops, and Northerners would buy these crops to produce goods that they could sell.

Prompts About Life in the North and South Before the Civil War for Kids:

In your own words, provide the definitions of all of the bolded terms from the lesson (Mason-Dixon Line, industrial economy, agricultural economy). Each definition should be one to two sentences in length.

Example: Farming is the main component of an agricultural economy.

Write an essay of one paragraph that explains how the Northern and Southern economies were connected, in spite of their differences. Also make sure that your essay answers the following question: Why couldn't Southerners sell their products to Europe?

Example: Since the South lacked railroad development, Southerners could not move agricultural products to seaports for shipment to Europe.

In one paragraph, write an essay that describes the life of a slave in the South. Also make sure that your essay answers the following question: How did slaves rebel against their owners?

Example: Slaves could steal or destroy their owners' crops.

Life in the South: Ordered Society and Economy of the Southern States

African Americans in the Civil War: Lesson for Kids

The Mexican-American War, Treaty of Guadalupe Hidalgo & the Wilmot Proviso

Life in the North After the Civil War