The relativity of distance and time accounts for the constant speed of light. Explore the theory of relativity, classical relativity and an example, discover if motion and speed are relative, and learn about relativity at high speeds and how light speed can be constant. Updated: 08/24/2021
Create an account

The theory of relativity provides a way for observers to agree on what they see from different perspectives. The perception of an object can vary from situation to situation or from person to person. For example, objects up close appear to be larger than when farther away. Furthermore, objects traveling in a moving car appear to be at rest relative to the observer in the car. An observer on the side of the road, however, perceives the objects moving at the same speed as the car itself. In other words, while the objects in the car are not moving relative to the car, they are moving relative to the road. Classical relativity tells us that motion is relative to the observer's state of motion. 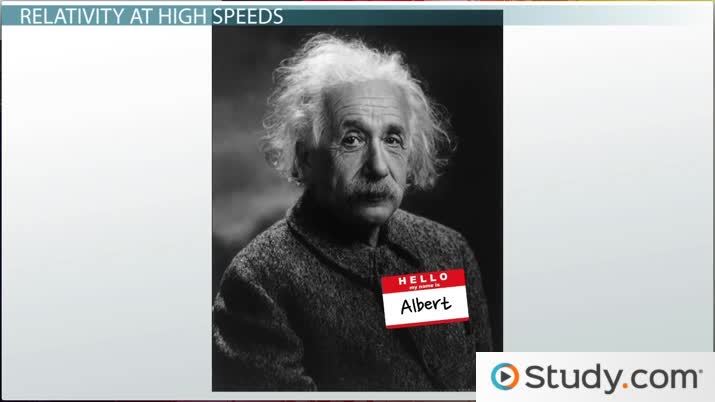 Is All Motion Relative?

Speed of Light Is Not Relative

Now let's say you shoot a laser of light away from your spaceship. Using your trusty radar gun, you would measure the speed of the laser to be 300,000 km/sec. Let's say your buddy has the same radar gun on Earth. How fast would she record the laser of light to be moving? You guessed it - your buddy would measure the velocity of 300,000 km/sec. As you see, the speed of light is the same relative to your fast-moving spaceship as it is relative to your buddy standing still on Earth. The speed of light is not relative.

We need to reconcile this apparent inconsistency of light speed with the theory of relativity - at least classical relativity. Is it possible for speed to be both relative to the perspective of the observer and constant when it comes to really fast-moving speeds such as light? Albert Einstein, perhaps the greatest physicist of the 20th century, proposed that both indeed are true. He proposed that a person traveling at a constant velocity will observe the same laws of physics as a person at rest.

Speed is a measure of distance traveled over time. This is true for light as well as it is for any other object in motion. Since light follows the laws of physics, Einstein postulated that all observers will measure the same speed of light regardless of their state of motion. In other words, light will travel at the same distance in the same amount of time.

How Can Light Speed Be Constant?

We can understand Einstein's proposal by breaking down speed. Speed is simply a measure of distance traveled over time. In fact, we use the term light year to express the distance traveled by light in one year. The formula for speed is s = d / t where s = speed, d = distance traveled and t = the time required to travel that distance. According to this formula, if both distance and time change by the same factor, speed does not change.

For example, one car traveling 10 miles in 1 hour and another car traveling 100 miles in 10 hours will both travel at a speed of 10 miles per hour - their speed is the same. Likewise, different observers can agree on the same speed of light if they disagree on distance and time. As it turns out, both distance and time are relative to speed. At very fast speeds, say the speed of light, time slows down and distance shortens. This allows both stationary and moving observers to record the same speed of light. But how does time slow down and how does distance contract at high speeds? These phenomena will be explained in subsequent lessons.

Classical Relativity: Distance and Time Relation to the Observer

The Theory of Relativity Lesson for Kids

What is an Energy Level of an Atom? - Definition & Equation