Have you ever watched political coverage on your TV or on the Internet? It seems like there is always something happening. As citizens, we have a right to know what is going on at all levels of government, from local to federal. But there is so much to keep up with that you might often feel lost or unable to figure out what's happening.

Fortunately, there are many ways the average person can find political information relevant to him or her. One way is through the use of or participation in linkage institutions, which are very important in connecting citizens to all levels of government. While not formally part of government, their presence is part of what makes political systems work. 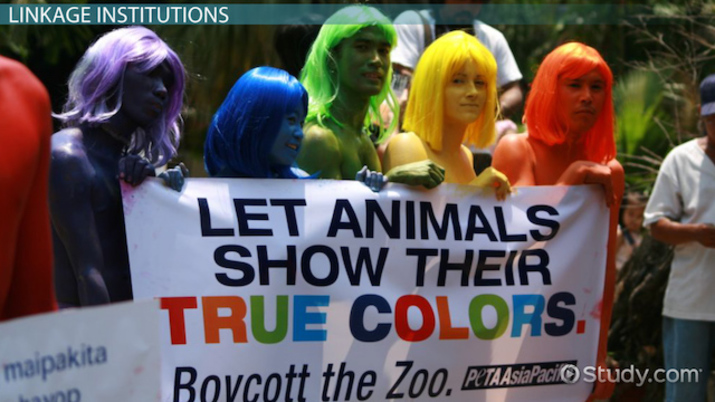 Media is everywhere in today's world. Whether it's television, newspapers, books and magazines, the Internet and social media, or other forums, citizens can find out a ton about the political process. Perhaps it's which candidates are running for office, what their platform and ideas might be, and even election results. Please keep in mind, however, that a media source may try to tell you that one candidate is better than another, which is called bias.

Once an official is elected, the media tells you what the politician has been up to, good or bad. This might include information about laws passed, debates and speeches, and appearances for their constituents. Media sources also usually offer an opinion on a politician's performance. In many ways, the media is a watchdog of politicians.

Many groups exist with the primary mission of protecting a particular set of concerns they hold near and dear about a politically relevant topic. Called interest groups, or lobby groups, they are seemingly countless in both quantity and the issues they fight for. They can represent groups of issues or groups of people. Some well-known examples of very influential interest groups include The National Organization of Women, The United Farm Workers of America, and the National Rifle Association.

There are many ways in which interest groups impact government. Some of these include raising money for a candidate who supports their mission, trying to persuade voters to elect a certain candidate, or attempting to influence what laws are passed. Interest groups use many approaches, including letter writing, appearing in the media, or using grassroots methods, which are attempts to rally people around them starting at a minimal level, like at a small town meeting.

Political parties are the most divisive type of linkage institutions, and they are at the forefront of the United States' democracy. The two major political parties in the U.S. are the Democrats and the Republicans. Political parties tend to be a bit more general in their beliefs when compared to interest groups. For example, the Republican Party might have a set of beliefs and ideologies that align with dozens of interest groups. The ultimate goal of each party is to get as many of their members elected as possible to control what the government does.

When it comes to picking a candidate to vote for, many people tend to choose the one whose political party beliefs line up most closely to their own. For example, if taking care of the environment is a big priority to an individual, he or she will likely vote for a candidate who supports the same. Political parties tend to find the voters that best match a candidate and get out to garner their support.

Elections: Participation at Its Best

Elections are, in many ways, a culmination of the three different linkage institutions we've already covered. Leading up to an election, the campaign process includes political parties finding an ideal candidate, as well as dealing with the pressure and influence of interest groups. And of course, the whole process will be covered significantly by the media. All of this is done to get citizens to cast their vote for a specific candidate.

The process of an election from campaign to vote is a long and arduous one. The time it takes to actually cast a vote (the ultimate power of the people) from the start of the campaign process is quite lengthy. While elections are the most basic form of linkage institutions, they are perhaps the most important because they provide citizens with a direct voice to the government. If a person does not like that an interest group pressures a candidate, for example, that person can exhibit his or her power by simply not voting for that candidate. This is the most fundamental form of contact with the government in the United States.

Democracy is government controlled by the people. In the U.S., representative democracy is the type of democracy used to get the candidates of political parties elected into office, which is often done with the help of different media sources and interest groups. Theoretically, those who are elected to political office are there to represent the people and should be accessible at all times. Linkage institutions are the mechanisms that enable this access, and there are four main types, including the media, interest groups, political parties, and elections.

Ultimately, the goal of linkage institutions is to provide the most possible access to elected officials by the people who elected them. Though mostly informal, they are vital to the American political process.

Party Nomination to Congress: Process to Become a Candidate