View bio
Many kinds of foods contain lipids which the body absorbs through the small intestine. Learn about the digestion of lipids using bile salts and pancreatic lipase, and absorption of lipids using epithelial cells, chylomicrons, and lacteals. Updated: 08/26/2021
Create an account

Foods, such as meats, dairy products, seeds, nuts, and oils, contain dietary fat. Fat is a common example of a lipid, and in this lesson, you will learn about the unique way lipids, such as fats, are broken down and absorbed out of the digestive tract.

A lipid is defined as a fat-like molecule that does not have the ability to dissolve in water. This inability to dissolve in water adds an element of difficulty to fat digestion. Because fat does not like water, it tends to clump together and form large droplets as it moves through your digestive system. So, dietary fat in the small intestine looks like a fairly large glob of fat. 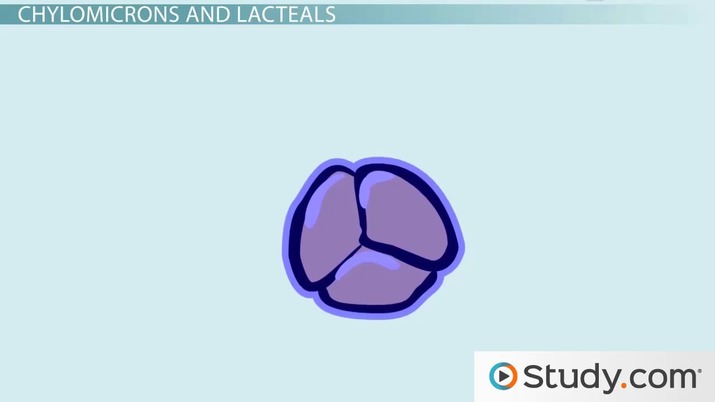 Coming up next: Anatomy and Physiology of the Large Intestine

These globs remain until bile, that is produced in the liver and stored in the gallbladder, mixes with the large fat droplets. Bile contains bile salts, which act as an emulsifier of lipids. The term 'emulsify' means to break large fat droplets into smaller droplets. And, that is exactly what we see happening here in the small intestine. The bile salts break up and coat the fat to form much finer droplets. These finer droplets have more surface area, and this aids digestion because the fat-digesting enzyme pancreatic lipase can only act on the surface of the fat droplet.

The enzymes of the small intestine are responsible for almost all of the fat digestion. When pancreatic lipase acts on the lipid, it breaks it down, which results in free fatty acids and monoglycerides, the two digestive products of lipids. These products are much easier for your small intestine to handle, and they have very little trouble being absorbed out of your digestive tract.

Absorption takes place through the mucosal lining of the small intestine, and when these products pass through the mucosa, they enter the epithelial cells. Once inside the cells, the free fatty acids and monoglycerides enter the endoplasmic reticulum, which is a system inside the cell whose functions include synthesis and transport of lipids. Here, the digested products are resynthesized into triglycerides.

Triglycerides are the major form of fat stored by the body. So, an important fact to point out is that fats are reassembled in the epithelial cells of the small intestine. This makes fat absorption different than absorption of proteins and carbohydrates. With protein and carbohydrate absorption, we see their basic units, which are amino acids and monosaccharides, are able to pass through the intestinal epithelial cells without being altered.

Before triglycerides actually leave the epithelial cells, they're coated by proteins, which results in the formation of chylomicrons. So, we see that chylomicrons are small globules composed of protein and lipid. The coating of protein gives the triglyceride a water-soluble coat, and this allows the chylomicron to travel outside of the cell.

The newly formed chylomicrons leave the epithelial cell and enter the lymphatic capillaries, which are called lacteals. The lacteals are found in the fingerlike projections of the intestinal wall, called the villi. The lacteals represent another unique way fats are absorbed because lipids pass through the lymphatic system before they make their way back to your bloodstream.

This differs from protein and carbohydrate digestion because amino acids and monosaccharides do not enter the lymphatic system; instead, they travel directly into the blood capillaries and then into the hepatic portal vein that leads to the liver.

Fats can now travel around your body. They are used to build cell membranes, make the myelin sheathes that coat your nerves, and of course, insulate the body with a fatty cushion. Fats can also be used as fuel for your body if there are not enough carbohydrates in your system. Although you need fats for these important body functions, you can have too much of a good thing. For example, a high level of triglycerides in your blood can increase your risk of heart disease.

Let's review. A lipid is defined as a fat-like molecule that does not have the ability to dissolve in water. Lipids, or fat, go undigested in your digestive tract until they reach your small intestine, where they meet bile. Bile contains bile salts, which act as an emulsifier of lipids. This breaks the large fat droplets into smaller droplets that are then easier for the fat-digesting enzyme pancreatic lipase to digest.

When pancreatic lipase acts on the small lipid droplets, it breaks them down into free fatty acids and monoglycerides, which are the two digestive products of lipids. These small units are able to pass through the intestinal mucosa and enter the epithelial cells of the small intestine.

Once inside the cells, they enter the endoplasmic reticulum, which is a system inside the cell whose functions include synthesis and transport of lipids. Here, the digested products are resynthesized into triglycerides, which are the major form of fat stored by the body.

Before the triglyceride leaves the cell, they get a protein coating and become chylomicrons. Chylomicrons are small globules composed of protein and lipid. The chylomicrons first enter lymphatic capillaries called lacteals before entering the general blood circulation.

Fats are used to build cell membranes, make myelin sheathes, insulate the body, or act as an alternate fuel source.

After watching this lesson, you will be able to:

Create a Board Game

Students will use their knowledge of lipids and the digestive system to create a board game designed to test players' knowledge of these same concepts.

Students should have time to test out their games by playing them. If possible (or desired) students should work in pairs for this project.

Influences on the Absorption, Retention, & Availability of Minerals in the Body

How Fiber is Digested by the Body

Blood Supply of the Kidneys

What is Bile? | Function & Production