Do you sometimes feel like nobody understands you? Well, perhaps you should try using more literal language! Learn more about this form of straightforward expression in this lesson, where you'll also find some literal language in action. Updated: 11/27/2019
Create an account

Say your friend's dog escapes from its tether. If you were to tell him that his pet is 'off the chain,' what do you think his response would be? Most likely, he would thank you for the compliment rather than searching for his dog. He probably wouldn't know you were employing literal language, which refers to the use of words solely by their defined or primary meanings, as opposed to any other meanings we give them. 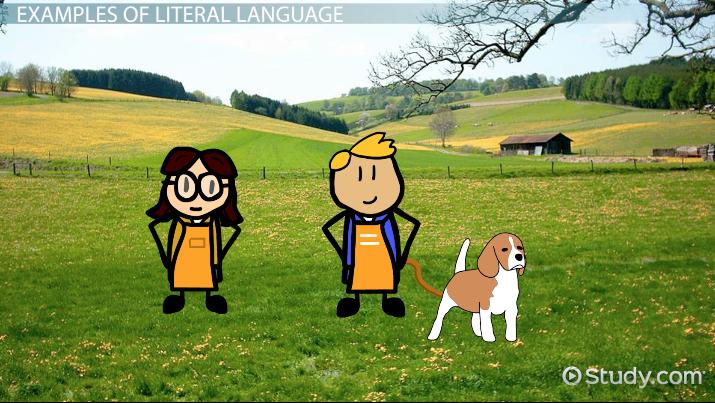 Coming up next: Pun in Literature: Definition & Examples

In the case of your friend's fugitive pet, the literal usage of 'off the chain' probably wasn't the best choice of words. That's because this phrase is typically employed as figurative language, which identifies the use of words in figures of speech to convey meanings different from their usual definitions. Figurative language can include things like metaphors and similes. In other words, we tend to use 'off the chain' in ways that have nothing to do with the literal meanings of off ('detached from') and chain ('tether typically constructed of interconnecting metal links'). Instead, combining these words into a single phrase yields an expression that identifies something as excellent, extraordinary or just really cool.

It's important, then, to remember in what context we're using or encountering words. For instance, having a dog escape is not the best time to bet on your friend's literal interpretation of 'off the chain,' since he probably won't take these words in their primary, non-figurative senses. So, as a rule of thumb, we should always avoid figurative language when there's a chance that we're not getting across exactly what we mean.

Sometimes being too literal can also be a problem, especially when we're trying to convey ideas from another tongue in English. Literal translation, or rendering foreign words by their primary definitions in another language, works as long as we're dealing with straightforward word correlations, such as the Latin corpus to the English body. Conversely, literally translating words and phrases that have a figurative meaning in common usage - known as idioms or idiomatic expressions - disables readers from fully understanding what was being said in the native language. For instance, literally translating the Latin phrase habeas corpus as 'let you have the body' does not help us comprehend its usage as a legal idiom in Rome (or America).

Now that we've seen a couple ways that we can find literal language, let's take a look at some examples to see it at work!

First, let's discuss literal interpretation. Many newspaper headlines make prolific usage of figurative language as a way to grab the reader's attention. However, the articles themselves are usually rather straightforward, and their language is meant to be interpreted literally. Take, for example, the headline 'The Garden of Death,' which came from a British newspaper in March 1994.

With its figurative title, the article was sure to catch the reader's eye. Nevertheless, the concise and highly literal article covered the macabre serial murders of several young women in Britain during the 1970s and '80s. Take a look at this excerpt from the article to see how open it is to literal interpretation: Detectives were searching for a number of other bodies after finding three buried in a suburban garden. Two of the corpses discovered yesterday are thought to be girls who disappeared 15 years ago.

As a contrast, how do you think someone like Stephen King would discuss this same incident? Most likely, authors of creative works would employ a great deal more figurative language than one might expect from a news reporter.

Next, let's take a look at literal translation. Translating idiomatic expressions can be a tricky business, especially when the words are construed too literally. Take, for instance, the Spanish idiom tomar el pelo, which literally means 'to take the hair.' In the Spanish-speaking world, this phrase has an entirely different meaning that has very little to do with the direct English translations of tomar (to take) and pelo (hair). Rather than referring to an act of stealing someone else's hair, 'tomar el pelo' is used by Spanish speakers to indicate that someone is kidding or is simply relaying information that is too good to be true.

Therefore, translating the sentence Te estoy tomando el pelo literally would make very little sense to Anglophones, since doing so would render, 'I am taking your hair.' The translation would be much less alarming and make much more sense to English speakers if we translate this Spanish idiomatic expression with a similar one in our own language: 'I'm pulling your leg.' Likewise, we wouldn't want to construe the English idiom 'to pull one's leg' by using the Spanish words for 'to pull' and 'leg' because the same problems with literal translation would arise.

Literal language refers to the use of words solely by their defined or primary meanings. It is contrasted with figurative language, which identifies the use of words in figures of speech to convey meanings different from their usual definitions.

When we take words in their primary, non-figurative senses, this is known as literal interpretation. Though many news headlines utilize figurative language, the articles' content is predominantly meant to be interpreted literally since they typically contain concise and straightforward language.

Rendering foreign words by their primary definitions in another language is literal translation. This can be quite problematic when dealing with complexly cultural phraseology. These words and phrases that have a figurative meaning in common usage are known as idioms, such as 'I'm pulling your leg,' and should be rendered using comparable expressions whenever possible.

Try to set a goal, as you finish watching the video, to do the following:

How to Write With Good Diction to Develop Style, Tone & Point-of-View

What Are Definitions in Technical Writing?