Literary criticism encompasses various types of critique on particular elements of a text. Explore different types of literary criticism, particularly those most commonly surrounding the novel, 'The Great Gatsby'. Updated: 11/29/2021
Create an account

The Great Gatsby, F. Scott Fitzgerald's third novel, was published in 1925. At the time, it was considered a disappointment, as it did not match the sales or critical acclaim of Fitzgerald's two previous novels. However, over the following decades, especially after Fitzgerald's death in 1940, critics and readers rediscovered the book. Today, The Great Gatsby is one of the most read and discussed American novels of the twentieth century. It inspires endless analysis and discussion among readers and critics. These different analyses of the book, focusing on interpretation and contributing to the reader's greater understanding, are known as literary criticism. 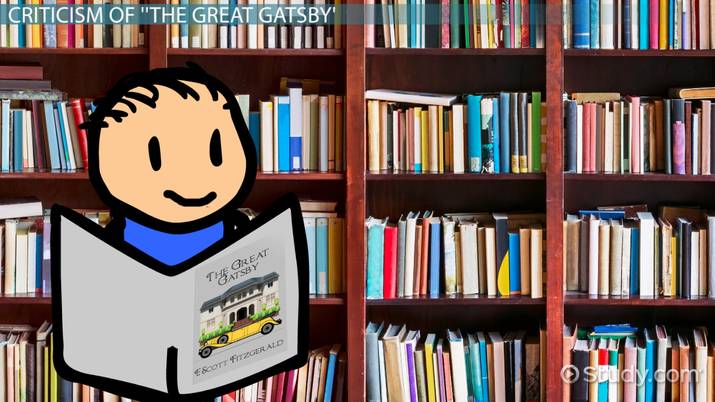 Try it now
Back
Coming up next: Modernism in The Great Gatsby

What Is Literary Criticism?

When you read an essay by a famous critic explaining the use of literary devices such as metaphor in a novel, this is literary criticism. When you discuss in class or among your friends what a book is really about, you are also practicing literary criticism. Some literary scholars view criticism in an absolute, narrow manner. Great works of literature like The Great Gatsby are great because they cannot be reduced to one single interpretive answer. It's better to think of literary criticism as a discussion. Every critic puts forth what they think is most important in the book and defends this assertion by referring to specific aspects in the text. Someone else then responds with their own interpretation, and the discussion continues endlessly.

Criticism of The Great Gatsby

One of the things The Great Gatsby is most known for is its vivid portrait of 1920s New York, which is why it generates a lot of historicist criticism. This was a period when many young men had just returned from World War I and were feeling disillusioned, while young women were exerting their independence like never before. Fitzgerald himself dubbed the era 'The Jazz Age,' a term which is still frequently used to discuss the time period.

A historicist critic would focus on the presence of these historical elements in The Great Gatsby. Gatsby, Nick, and Tom, for example, are all World War I veterans and, in different ways, trying to integrate back into the world. Gatsby has apparently made his fortune through bootlegging, the illegal distribution of alcohol. The book explores how the wealthy people of New York are happy to attend Gatsby's parties and drink his booze, but they never fully accept him. These types of things would be of most interest to a historicist critic.

In contrast, formalists like to ignore all historical background and other such external knowledge and focus on the literary text itself. They discuss how it impacts the reader through use of literary devices such as symbolism and metaphor. Fitzgerald is considered one of the great literary stylists of all time, and his books are filled with beautiful, deeply meaningful imagery. Formalist criticism is a popular approach to The Great Gatsby and his other books.

One of the most famous images in The Great Gatsby, for example, is the green light at the end of Daisy and Tom's dock. Nick sees Gatsby staring at the light early in the book and then, in the famous ending, Nick says that ''Gatsby believed in the green light.'' Here, of course, he is not talking literally but symbolically. The green light might be the most famous use of symbolism in twentieth century literature, and formalist critics have analyzed its symbolic importance for decades.

In the early twentieth century, the work of psychoanalysts like Sigmund Freud ignited interest in the inner workings of the mind. Freud himself often used literature to illustrate his theories of the mind, analyzing fictional characters like Hamlet. This led to the growth of psychoanalytic criticism, used to achieve a greater understanding of both the work of literature and the mind.

Nick spends the entirety of The Great Gatsby trying to figure out who exactly Gatsby is and what drives him in his need for financial success and Daisy. Psychoanalytic critics use psychology to try to figure out Gatsby, as well as the other characters in the book. A psychoanalytic critic might be especially interested in a passage where Gatsby spins tales of his wealthy upbringing and adventures, which Nick immediately recognizes as made up. What drives Gatsby to fabricate this fictional persona, even when seemingly opening up to his friend Nick? These are the questions that interest a psychoanalytic critic.

A work as rich and complex as The Great Gatsby can never be fully solved and inspires endless discussion and analysis, known as literary criticism. Every critic brings something unique to the discussion. Historicists focus on the book's time period and how it influences the text. The Great Gatsby is known for its vivid portrait of 1920s New York, and the wealthy people are happy to attend Gatsby's parties and drink his booze, but they never fully accept him. This would all interest a historicist. Formalists focus on a text's use of literary devices such as metaphor and symbolism. One might consider that Fitzgerald is considered one of the great literary stylists of all time, and his books are filled with beautiful, deeply meaningful imagery, like the green light in the The Great Gatsby. Psychoanalytic critics focus on the psychology of the characters. What drives Gatsby to fabricate his fictional persona would be of interest.

Marxism in The Great Gatsby

Tone in The Great Gatsby

Modernism in The Great Gatsby

Catcher in the Rye by JD Salinger| Summary, Plot & Analysis

Social Class in The Great Gatsby