In macroeconomics, the LM curve refers to a visual representation of the liquidity of money. Learn more about the definition of the LM curve, definitions LM and equilibrium, the LM equation, and the LM curve on a graph. Updated: 10/14/2021
Create an account

In macroeconomics terms, LM refers to the liquidity of money. As interest rates increase, the demand for money decreases. LM is really part of a larger model, the IS-LM model, where IS-LM stands for Investment Saving - Liquidity Preference Money Supply. These large words are basically just used to model money and income in an economy.

The models are used to define points of equilibrium, or balance; in other words, intersecting values where the demanded money equals the amount available to invest. While the formulas are a little more complex, it boils down to the basic economic analysis of supply versus demand. 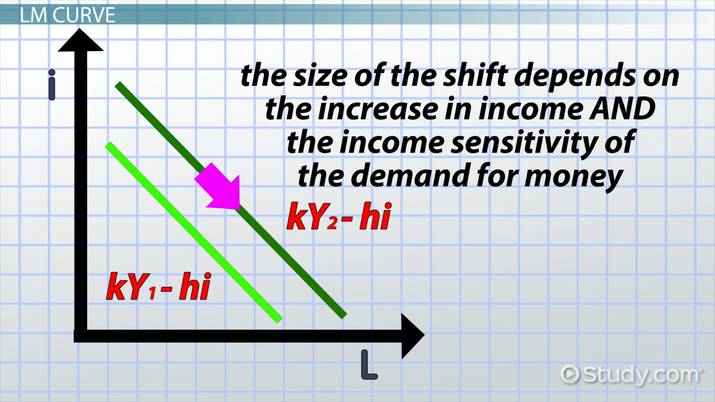 Try it now
Back
Coming up next: Macroeconomic Equilibrium: Definition & Overview

The LM equation calculates the demand for money, and the equation is represented here:

When we talk about real money, we aren't comparing real cash to Monopoly money. Instead, real money is adjusted for inflation. This tells us the true purchasing ability of money, or in essence, what your money can get you. The demand for money also depends on income. The more you make, the more you spend, or save in offshore accounts. It also depends on the interest rate, since people also leverage their money through investing.

Before we can map out the full LM curve, let's take a look at the demand for money, the L in the equation, in graph form. The LM equation can be used to create a straight line, much as the standard math formula (y = mx + b).

This graph is showing two sample calculations for L as plotted on the demand for money graph.

As national income increases, the demand curve shifts upward and outward, toward L on the graph. The size of the shift depends on the increase in income and the income sensitivity of the demand for money.

When the interest sensitivity for real money goes up, the slope of the demand curve is less steep. A small decrease in interest rates causes a larger increase in the demand for money.

There's one more thing to evaluate before we get to the full LM, and that is the money supply. In our example, we'll keep it simple and keep the money supply at a fixed rate. This means that it'll show up on the graph as a vertical line. In the following graphic, we've placed the money supply line on top of the demand for money graph:

Note the two circles and intersection points at interest points one and two. This indicates an equilibrium (remember, that means balanced) between demand and money supply at those points of interest.

Now that we have the building blocks set, let's look at the LM curve.

LM Curve on a Graph

When the real interest rate goes up, real income goes up. In our graph above, we're showing two points where the money market is in equilibrium.

The LM line shifts to the right if any of the following conditions are met:

The LM curve is a graphical representation of the equilibrium in the money market. L denotes liquidity and M equals money. Equilibrium is really just a fancy term for 'balance.' Demand for money is defined by the equation L = kY - hi, where L is the demand for inflation-adjusted money; k is income sensitivity of demand; Y is income; h is interest sensitivity of demand; and i is the interest rate. These factors affect the slope of the LM curve. For example, an increase in interest rates reduces the amount of money demanded, and an increase in income drives it up to the right.

Impact of Marginal Propensity to Consume on Individual & National Economy

Impact of Marginal Propensity to Consume on Individual & National Economy