Scott has a Ph.D. in electrical engineering and has taught a variety of college-level engineering, math and science courses.

A logarithmic scale is a useful way to represent information on a graph, especially when there are exponential changes in the magnitude of the numbers. Learn more, look at several examples and take a quiz to test your knowledge.
Create an account

What Is a Logarithmic Scale?

Have you ever accidentally left some raw chicken out on the kitchen counter for four hours? If you have, then you knew that you had to throw it away, because there are often dangerous bacteria already in raw chicken, and at room temperature, they can multiply quickly. Under ideal conditions some bacteria cells can divide in only 30 minutes, and those cells divide again after another 30 minutes. If this process starts with just one cell, the exponential growth of the bacteria can yield almost 17 million cells in just 12 hours! The following chart illustrates this growth:

This is a good chart, but it has a problem. Each axis in the graph uses a linear scale, so while the information is being represented accurately, it's really hard to tell what's happening with bacteria growth until about the 9-hour point. We need a way to rescale one of the axes so that all of the information can be used. It is for this reason that logarithmic scales were developed.

Recall that a logarithm is just the power to which a base is raised to equal a particular number. In the following example, the base is 10 and the logarithm is 1.7:

The definition of a logarithmic scale is one in which the units on the axis are powers, or logarithms, of a base number, and it is typically used when the increase or decrease in value on that axis is exponential. Most often, the base used is 10. If only one axis uses a logarithmic scale, then it is defined as a semi-log chart. If both axes use a logarithmic scale, then it is defined as a log-log chart. A logarithmically scaled axis can never represent zero or a negative number, because there is no power to which you can raise a base number to get numbers less than or equal to zero. We can have logarithms that are equal to zero, but remember that they represent the number 1; negative logarithms are also used, as we will see in an upcoming example.

In order to get more insight from the bacterial growth chart, we can change one of the linearly scaled axes to a logarithmic scale, thus creating a semi-log plot. Let's reformat the y-axis using powers of 10 to represent the cell growth numbers: 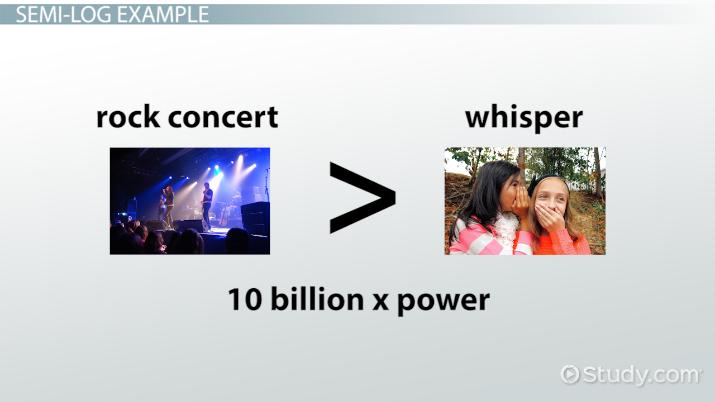 Coming up next: What is Pangaea? - Theory & Definition

Let's look at another semi-log example:

What's the loudest sound you've ever heard? Maybe it was a rock concert or a clap of thunder. And how about the quietest sound? A whisper? Common audio power measurements put the rock concert at 10 billion times the power output of the whisper! And yet, the whisper is measured as having 100 times the power of the weakest recorded sound. The chart below shows the audio power output of some familiar sounds multiplied by the power of the weakest sound (which has a power of 1):

Once again, we have an accurate chart, but many of the noise sources have comparatively low power associated with them, so they appear to be insignificant. Let's again create a semi-log chart by changing the y-axis to base 10 logarithms. This gives us a new chart that can provide more insight:

Now we can get a better idea of the power level attributed to each noise source. Freeway traffic, for example, has a logarithm of 7. 107 is 10,000,000. So, freeway traffic has an audio power that is 10 million times greater than the weakest recorded sound. These charts also provide a convenient way to do comparisons. Suppose we wanted to know how much louder a jackhammer is than a library. The jackhammer has a logarithm of 10, and the library is 4. Exponents subtract, so 10 - 4 = 6 and we can raise 10 to the 6th power to see how much louder the jackhammer is (one million times) than the library.

Sometimes we want to use fractional values that change rapidly. Light intensity is a good example. Physicists use a term called irradiance, which is measured in watts per square meter. In a vacuum, light power per unit area decreases rapidly as the square of the distance when you move away from the initial source. In the following illustration, the initial light intensity has a value of 2 watts/square meter at an initial distance of 1 meter:

As it is, the graph does a good job of depicting how fast light power drops off with distance. But, what if we want more resolution for distances greater than about 4 meters? Or, what if we want to have the ability to compare values of irradiance between 10 and 100 meters away with those close in? Our solution is a log-log chart. That is, we will put both the y-axis and the x-axis into logarithmic scales. Here is an example of a log-log chart that gives us good irradiance data either close in or out to 100 meters:

As you can see from this example, logarithmic scales can be displayed in positive or negative numbers (because logs can be positive, negative, or zero). They can also provide a linear graph so it is easy to find y values for a given x value. What you will not find on logarithmically scaled axes are logarithms that correspond to an original value of zero or a negative number.

Reading information from a semi-log chart, where the y-axis has been converted to a logarithmic scale, is easy. When a particular y value is found, it is the power to which you can raise the base (usually 10) to find the original number being represented. When reading a log-log chart, both the x-axis and y-axis values need to be converted using the appropriate base. When comparing two y values on a logarithmic scale, subtract the second logarithm from the first, and then raise the base to the resulting number to get the actual ratio between the two numbers.

Radians & Degrees on a Calculator

How to Solve and Graph an Absolute Value Inequality

What is a Leveraged ETF? - Decay, Risk & Volatility

In Vivo vs. In Situ Experiments

What is a Factorial? | How Factorials Work