The validity of a logical statement often can be determined by looking at its logical equivalence. Learn about the logical variants of a conditional statement, and explore the definitions of converse, inverse, contrapositive, and counterexample. Updated: 08/26/2021
Create an account

How do you know if something is true? When you think about it, it is a really important question. We like truth. . . we like to know when things are true. . . so how do you know? There are two main ways: First, something can be factual. Secondly, it can be logical. Some things we know to be true because it is logical that they are true.

The art and science of logic is one with deep roots in Western history and philosophy, and over the millennia, we've developed a few handy rules for testing the truth of logic. One such rule is that of logical equivalence, or the mutually supported logic between two statements. Imagine that I said:

If I were sitting on my floor, I'd be at home.

Then, imagine if I said:

If I were not in my home, I would not be sitting on my floor.

and compare them, then do the same for a second statement. So how do we know what's true? It's just logic. . . 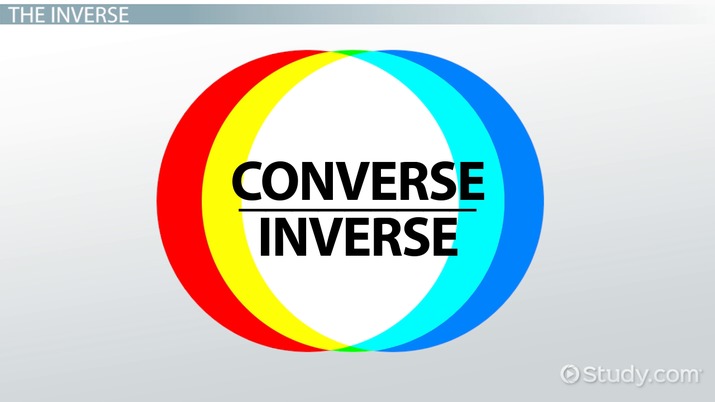 There are many ways we can talk about logical equivalences, but let's focus on four of the most common:

Imagine if I said the conditional phrase:

That is logically accurate. Now try this:

If I were at home, I would be sitting on my floor.

This new phrase is what we call the converse of the original statement. The converse is created by switching the hypothesis and conclusion, and as you can see, it changes the logic of the sentence. Even though the logical converse of our original statement contains the same words, it does not necessarily contain the same truth value or logical content. In the first sentence, sitting on your floor means you must be in your home; however, the converse is not necessarily true: you can be in your home but not sitting on your floor. I mean, have you heard of furniture? Sit on a chair! The converse may be true but is not always true.

Then, the inverse would be:

If I were not sitting on my floor, then I would not be at home.

As with the logical converse, the logical inverse does not necessarily hold the same truth value as the conditional statement: it is, in fact, possible to be standing on the floor and still be at home. But wait - there's more. . .

While the inverse and conditional phrases are not necessarily logically equivalent, what happens if we compare the inverse with the converse? Here's our converse phrase again:

If I were at home, then I would be sitting on my floor.

And here's our inverse phrase:

If I were not sitting on my floor, then I would not be at home.

Okay, enough with the warm-up, now it's time to get really weird. The converse flips a statement and the inverse negates it, but what if we do both? The logical contrapositive of a conditional statement is created by negating the hypothesis and conclusion, then switching them.

So, if our conditional is the statement that:

Then the contrapositive would be:

If I were not in my home, I would not be sitting on my floor.

The logical contrapositive and the conditional statement are logically equivalent. They both contain the same logical content and truth value. If one is true, then the other absolutely must be true as well.

There is one more way we should also consider logical equivalence. When trying to determine whether or not a statement is logically true, it can be useful to employ a counterexample, or an easily understood substitute to examine the validity of the logic. Basically, we see if we are able to turn this logical statement into an obvious falsehood. Counterexamples are used to test the logical validity of a claim not its factual accuracy. If one counterexample can be found, then the claim is not always true and is not logically valid.

Let's look at an example of this. Our argument is that:

The first step to building a counterexample is to break apart this argument:

To test this, let's substitute the middle part of this argument for a related but also true statement like: I am sitting on my couch.

Now, if we put the entire argument back together, it reads:

Do you see what we did? By substituting a portion of the argument, we made the last claim false. It proves that the two statements are not logically valid and, therefore, not logical equivalents. It's logic. . .

In examining issues of logic, one thing we often do is look at logical equivalence, the mutually supported logic between two statements. Statements which are logically equivalent both contain the same truth value and logical content. There are a few ways to examine this.

The logical contrapositive can be found by negating the hypothesis and conclusion, then switching them. This statement is logically equivalent to the conditional statement. Whether or not these are logically valid, can be tested with a counterexample, in which part of the argument is replaced with an easily understood substitute. Through these we can begin to understand what is true and what is not - all thanks to logic.

Power Sets in Algebra: Introduction & Examples | What is a Power Set?

How to Find Slope with 2 Points Formula