In this lesson, we will take a look at the origins and meaning behind the famous children's song 'London Bridge' that has been sung across the United States and Europe for centuries. Updated: 07/14/2021
Create an account

London Bridge Is Falling Down

London Bridge is falling down, my fair lady''

You probably recognize this familiar children's song and game, but what does it mean and who is this lady?

Some clues may lie in the additional verses that are not as well-known. These verses suggest materials that may be used to build the bridge, but there are problems with each of the options. For example, wood and clay will wash away, bricks and mortar will not stay, iron and steel will bend and bow, and silver and gold will be stolen away. It is suggested to have a man watch the bridge, but he might fall asleep. He might stay awake if you give him a pipe.

Let's examine the origins of London Bridge, as well as speculations as to its meaning. 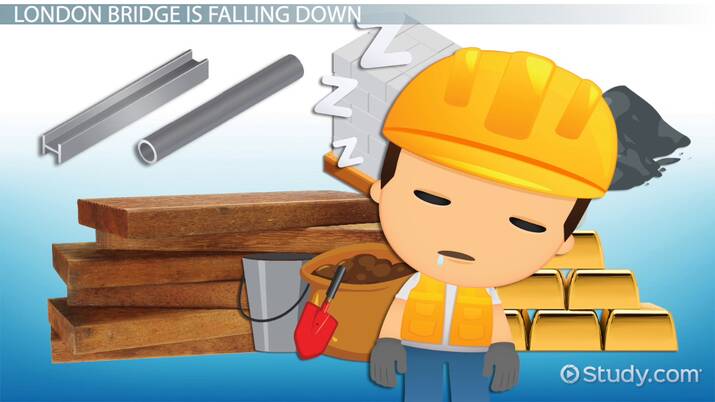 Why Did the Bridge Fall?

Heimskringla is a saga of the Norse kings from the 9th century to the middle of the 12th century written by Snorri Sturluson in Old Norse. In 1845, Samuel Laing translated it and found a verse that's similar to the song, London Bridge. According to this text, Olaf II, the king of Norway who is known as St. Olaf, destroyed London Bridge in the first part of the 11th century. There are no other accounts that this attack on London Bridge took place, but Olaf II was known for violent raids.

Another possible explanation is that there were devastating fires in London that may have caused structural damage to the bridge. Another possible reason for the bridge coming down may have been the decision by Parliament to rebuild the bridge to improve the flow of the Thames River.

After attempting to build the bridge with a variety of materials, the song says, Take the keys and lock her up. The children playing the game take someone prisoner by putting their arms around whoever is under the bridge. Many think this refers to the practice of sacrificing children in the foundation of structures, which was thought to add stability. While there is no proof that children were immured, or buried, in the foundation of London Bridge, children's skeletons have been found in the foundations of other European buildings.

Many have speculated about who the ''fair lady'' is in this nursery rhyme. One theory is that it refers to Matilda of Scotland, Henry I's wife. Matilda was responsible for supervising the construction of several bridges in the first part of the 12th century.

Eleanor of Provence, the wife of King Henry III, has also been rumored to be the lady in the song. Eleanor is said to have profited from the tolls on the bridge. Further, she was very unpopular and was once attacked by a mob on London Bridge that threw things at her in protest of taxes.

Since versions of this song and game are popular across Europe, it's possible that the original version of this song did not reference London Bridge at all, but some other bridge in Europe, such as Germany, Italy, Denmark, or France.

London Bridge has been a popular children's song in several countries for centuries. Several theories explain its origin. Heimskringla is the saga of Norse kings from the 9th to the 12th centuries that suggests that Olaf II of Norway may have attacked the bridge, causing it to fall.

Others speculate that the bridge falling may be related to fires in London or the decision to rebuild to open up the waterways. Some think that the part of the game where children capture one another to ''lock her up'' may be related to the practice of sacrificing children in the foundation of structures. While there's no proof that children were immured, or buried, when building the London Bridge, many other European structures have been found to contain skeletons of children.

''My fair lady'' may refer to Matilda of Scotland, Henry I's wife, or Eleanor of Provence, the wife of King Henry III. It's also possible that the song refers to another bridge in Europe.

What Do Hippos Eat? - Lesson for Kids

Importance of Including Assessments in Lesson Planning

Structuralism and the Works of Levi Strauss

Where the Wild Things Are by Maurice Sendak | Characters & Summary

What Are Singular Verbs? - Definition & Examples

What Is a Stakeholder in Education? - Definition & Examples