Vidhi holds a Masters in Education, B.A. in Spanish Literature from Rutgers University. Vidhi has experience working in academic affairs and staff management.

The looking-glass self is a theory developed by Charles Cooley (born in 1864) that describes how we each create our own self-image. Discover who Charles Cooley was; the definition and examples of the looking-class self; and the effects and three main concepts of the looking-glass self, including: we imagine how others see us; we imagine the judgements others make about us; and we create our self-image according to the comments of others. Updated: 08/28/2021
Create an account

Who Was Charles Cooley?

Charles Cooley was a sociologist who was born in 1864. He attended the University of Michigan, where he got his undergraduate degree in engineering. He returned later to study sociology. In 1918, he served as the president of the American Sociological Association. Cooley is most famous for his theory of the looking-glass self. 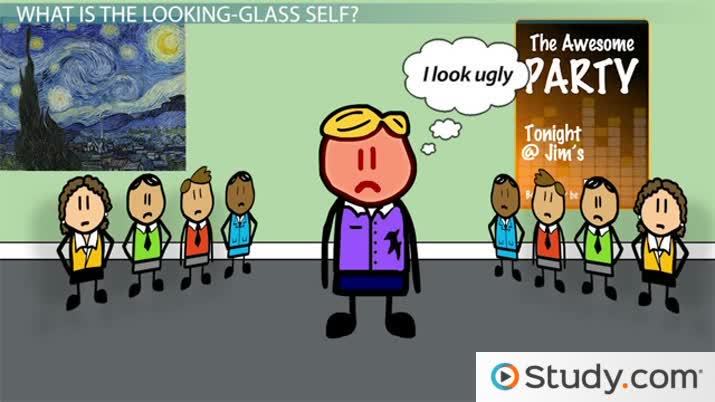 Coming up next: Axis III in the DSM: Diagnosis, Disorders & Examples

What Is the Looking-Glass Self?

The concept of the looking-glass self can be understood through three main concepts that all relate to how we create our self-image.

1. We imagine how others see us.

For example, Mary wears what she considers her lucky outfit so that nothing bad can happen to her. As she walks down the hallway, her classmates stare. She assumes it is because she looks great in her lucky outfit and smiles at them, getting smiles in return.

John, on the other hand, has had a rough morning. His shirt got sucked into the fan before he put it on. After shutting off the fan and retrieving the shirt, he realizes that it is ripped. He hasn't done laundry and that was his last option! He has an exam that day so he goes to class anyway, ripped shirt and all. Any time someone looks at him, he assumes they are staring at how ugly he is in his ripped shirt.

2. We imagine the judgments others make about us.

To continue our examples: Part of Mary's lucky outfit is her Gucci handbag. She thinks that others will think that she is rich if she carries it around. She thinks that this will make people like her more. She wants to throw a party on Friday, so if people think she's rich, they might want to come over to her house.

But John thinks that his tattered shirt will make people think he's poor. He doesn't want to look like he doesn't have money - he thinks that he won't get invited out to eat because people will assume he has no money.

3. We create our self-image according to the comments of others.

Now Mary is sitting in her math class and raises her hand to ask a question. The teacher calls on her and asks what she needs. Mary says that one of the concepts didn't make sense to her. The rest of the class supports her by saying, 'Yeah, good question. I don't get it either!' The teacher explains it again. As Mary is walking out, a classmate stops her to say, 'Hey, thanks for asking that - nobody got it. You were the only one brave enough to say something.'

Meanwhile, John makes a comment to his classmate during the exam. His classmate whips around and says, 'Shut up! Are you stupid? We're in an exam. I'm not getting accused of cheating because you had to go and talk to me.' John is taken aback and says something to another classmate but gets a similar reaction.

If Mary and John repeatedly receive this kind of positive or negative feedback, they will develop a self-image that is consistent with it. For example, if Mary gains confidence from all the positivity she's receiving, her self-image will be one consisting of high self-esteem. She may think she's beautiful, friendly, brave, and smart. If John continues to think negatively and receive negative feedback, he will develop a self-image consisting of low self-esteem. He may start to think he's ugly and stupid.

The looking-glass self thus teaches us that it is important to develop a healthy self-image!

After you have finished with this lesson, you'll be able to:

The Self: Executive and Organizational Functions & Gender and Cultural Differences

Sense of Self and Self-Socialization: The Development of Self-Views

George Herbert Mead's Stages of Self and Development in Toddlers

The Halo Effect: How Traits Affect Our Judgment