Abby has taught elementary special education and has her master's degree in this area.

What Was the Louisiana Purchase?

Imagine having the chance to double the size of your room, house, yard, or classroom. That would give you much more space, wouldn't it? Think of all the things you could do with that space. Now, imagine doubling the size of the United States. This is exactly what happened with the Louisiana Purchase.

The Louisiana Purchase was an American-French land deal in 1803. The United States purchased about 827,000 square miles of land from France for $15 million. The land purchased, which was called the Louisiana Territory, started on the west side of the Mississippi River and spanned all the way westward to the Rocky Mountains. The stretch of land reached the Canadian border in the North down to the Gulf of Mexico in the South. 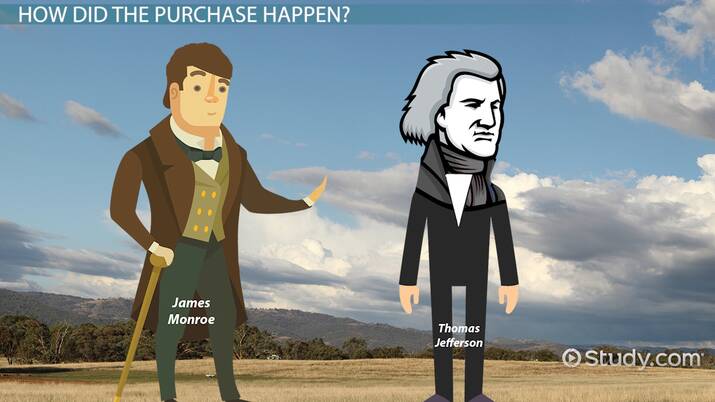 Coming up next: Pony Express Facts: Lesson for Kids

Why Did America Want the Land?

America needed more land because people kept moving and exploring farther west. America also wanted the land because it contained the city of New Orleans. Many Americans lived in this area, and many American ships used the city's port to send things up and down the Mississippi River to other parts of the country. A port is a location where ships and come in and out. America also used the city of New Orleans to send and receive things to and from other countries. The government knew it needed to protect the use of New Orleans for American trade.

How Did the Purchase Happen?

The president at the time of the Louisiana Purchase was Thomas Jefferson. He decided to try to buy the area from France, but Napoleon Bonaparte refused. Napoleon was the French leader at the time and also wanted to use the land to expand France into the West.

But, Jefferson wasn't ready to give up yet. He sent James Monroe, a politician and future president, to France to try to talk Napoleon into selling New Orleans and the surrounding area. Jefferson told Monroe that if he couldn't buy New Orleans, to at least try to buy access to the Mississippi River and the New Orleans port.

Much to Jefferson's surprise, Monroe was able to purchase the entire Louisiana Territory - Napoleon had decided he would sell all of the land to America! France was involved in wars with other countries and things were not going well, and since France was in no position to expand westward in America, Napoleon wanted to sell the land. The United States quickly agreed and purchased the land for $15 million.

Effects of the Purchase

The Louisiana Purchase was one of Thomas Jefferson's biggest contributions as president. The area purchased included what would later become 15 different states.

The Clash of the Ironclads: Lesson for Kids

Why Was the Civil War Fought? - Lesson for Kids