John Milton's poem, 'Lycidas,' is one of the most famous examples of pastoral poetry, which harkens bucolic scenes of shepherds, rolling hills, and an idyllic, rural way of life. Explore a summary and analysis of Lycidas by Milton and discover the metaphors and referential imagery of the short but influential poem. Updated: 09/15/2021
Create an account

Have you ever heard a setting or situation described as 'idyllic?' Maybe it was a secluded farm or some representation of country living. Either way, this descriptor is taken from the term idyll. An idyll is basically a really peaceful, happy scene, usually in a pastoral area, like a quaint farm or spiritually serene natural spot. At only 193 lines, 'Lycidas', a poem by John Milton, is certainly shorter than some of his other work, but like Paradise Lost and others, it's nonetheless filled with dense metaphors and highly referential imagery.

Comparing them to fruit-bearing vines, Milton invokes the Muses in the poem's first two stanzas, quickly and firmly establishing the Classical Greco-Roman tradition his work operates in. The invocation begins his remembrance of time spent at school with his friend, for whose passing this idyll, identifying the friend as the shepherd, Lycidas, is meant to be 'some melodious tear.' Quickly following this brief recollection, Milton conjures the image of blighted flowers to represent the untimely passing of his schoolmate.

Milton's old school chum was also apparently a poet. Milton spends the next two stanzas questioning how the art of poetry, symbolized by Nymphs and Muses, could have possibly saved his friend from his fate. Milton acknowledges that literary prowess may bring one notoriety, but he insists that the real, enduring fame is that which comes through recognition of one's good life in Heaven.

Seeing as how his friend was drowned at sea, Milton next ties in references to ancient rivers to the testimony of the Roman sea-god Neptune, who claims no responsibility for the loss, but instead blames it on the shoddy construction of the friend's ship. Then a representation of the River Cam continues the watery allusions as it comes to mourn the passing of its former pledge.

Milton shifts gears at this point in the poem, but maintains the water imagery to bridge the subject matter. By mentioning 'The Pilot of the Galilean lake,' i.e. St. Peter, Milton launches into an allegorical description of the Catholic Church and the empty spiritual promises it holds for its congregations.

Next, in the poem's longest stanza, Milton quickly returns to the task of mourning his lost friend, and even implores flowers associated with mourning or seemingly decked in funeral attire, speckled with black, to decorate his friend's funerary procession. In this case, that would mean accompanying the body to wherever the sea would take it, the mention of which gives Milton another opportunity to deride the Catholics with an allusion toward protection from Spanish influence.

Using an allegory of sunset over water, Milton asserts that, like the next day's sunrise, his drowned friend will be renewed through his true faith in Christ. Since Lycidas is headed to a better afterlife, the poem's closing lines call for an end to lamentation, and Milton ends his work with a reprisal of the sun allegory in which the fiery orb has found 'pastures new.' 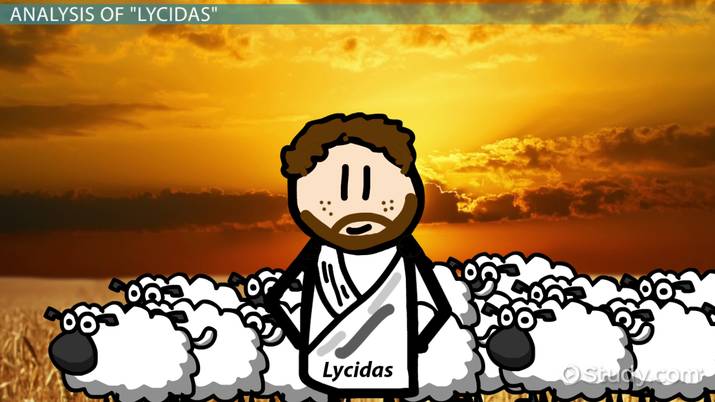 Try it now
Back
Coming up next: Old Ironsides: Summary & Poem Analysis

As an idyll, Milton's 'Lycidas' belongs to the ancient poetic tradition of pastoral poetry, a type of poetry that presents an idealized and tranquil vision of the country life. Throughout the work, Milton uses images and themes repurposed from the pastoral works of Classical authors like Theocritus or Vergil. For example, the poem's title is a reference to a popular recurring pastoral character. This lends his own sense of foundation to the time-honored tradition of allegorically representing the art of poetry through a shepherd's interaction with nature in his rural life.

For millennia, shepherds have been symbols of the innocence and virtue of country life separate from the urban rat-race. Stories like The Town Mouse and Country Mouse were born from this pastoral tradition, and you can probably even think of a few modern portrayals of quaint, simple rural living yourself. While this distinction is fundamentally important to pastoral poetry, the aspect of this sort of lifestyle that perhaps most appeals to poets is the manner in which a shepherd leads and corrals his flocks and commands the adoration of Nymphs and other wild spirits.

With his idyll, Milton honors his fallen friend, Edward King, as the shepherd Lycidas, recalling their compositions of pastoral works while at school in Cambridge. While memorializing King in this way might nod to his friend's skill, it really acknowledges Milton's own poetic prowess, especially considering any actual literary work of King's is mentioned only in passing.

While playing out all of the normal tropes of a pastoral lament, such as invoking wild spirits and plants to attend to the dead and mourning, Milton is also able to work in a brief but pointed spiritual note in addition to his poetic eulogy. A staunchly anti-Catholic man of faith himself, Milton uses the opportunity of pastoral verse to tie in a condemnation of the Catholic Church. This is represented most noticeably by 'the Pilot,' St. Peter. In an attempt to fulfill his poetically pastoral duties, Milton warns readers not to allow people like 'the Pilot' to 'climb into the fold,' stating that Catholic priests are ill-fit to tend to a congregation's needs ('The hungry Sheep look up, and are not fed') and ultimately characterizing Catholicism as 'the grim Wolf' amongst the flock.

With his friend mourned and his advice given, Milton has used pastoral poetry to its fullest advantage. He cleverly integrated two topics that by all accounts shouldn't really blend all that well. By doing so, John Milton is able to simultaneously appreciate some of the traditions of Rome, while openly rejecting a form of faith. So really, what Milton has accomplished with 'Lycidas' is a demonstration of what can be done with both poetry and religion, especially in the hands of someone like him.

Let's review. In short, we looked at 'Lycidas', a poem by John Milton and its themes. With its title taken from the name of a recurring character from ancient poetry, Milton quickly places his 'Lycidas' among the antique tradition of pastoral poetry, or verse works centered on the activities of shepherds and rural living in general. Itself an example of an idyll, which is a really peaceful, happy scene, usually in a pastoral area like a quaint farm or spiritually serene natural spot, 'Lycidas' employs pastoral imagery and tropes to mourn the loss of Milton's friend, Edward King, as well as to condemn the ecclesiastical approach of the Catholic Church.

Murder in the Cathedral by T.S. Eliot | Summary & Analysis

Murder in the Cathedral by T.S. Eliot | Summary & Analysis