This lesson will begin with a brief recap of Act 1, Scene 6, of Macbeth. It will then summarize Act 1, Scene 7. Macbeth no longer wants to kill King Duncan, but Lady Macbeth convinces him to go ahead with the plan.
Create an account

In ''Macbeth'' Act 1, Scene 6, King Duncan arrived at Macbeth's castle with some Scottish noblemen. Lady Macbeth greeted them, and the King thanked her for her hospitality. She responded by saying that the King has done so much more for her and Macbeth than they can ever do for him. King Duncan and the noblemen then entered the castle. 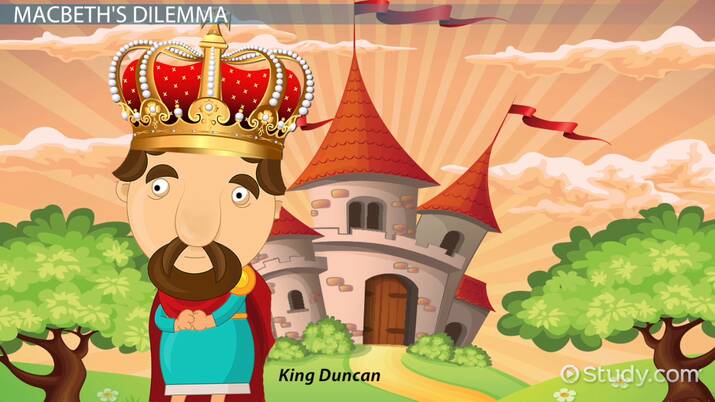 As we begin ''Macbeth'' Act 1, Scene 7, we find Macbeth pacing by himself as the servants set the dinner table. He's having a few problems with killing King Duncan, and is reconsidering his plan.

The first problem Macbeth has with killing the king is that he knows that such actions have a habit of coming back to haunt the people who do them. He says, ''But in these cases We still have judgement here; that we but teach Bloody instructions, which, being taught, return To plague the inventor.''

Macbeth also has some other, more disturbing problems with killing King Duncan. The first is his kinship, or common bond, and his loyalty to the King. ''I am his kinsman and his subject, strong both against the deed.'' As one of King Duncan's loyal generals, Macbeth cannot see himself killing the king.

Macbeth is also King Duncan's host, and that in itself gives him certain responsibility. ''Then, as his host, Who should against his murderer shut the door, Not bear the knife myself.''

Macbeth also considers the fact that King Duncan is very well liked, and that he is a virtuous, or a good and ethical, ruler. Other than his own ambition, Macbeth realizes that he has no reason for killing King Duncan and decides against taking this course of action.

At this point, Lady Macbeth comes to find Macbeth. She tells him that King Duncan has had his dinner, and that he is asking for him. Macbeth tells her that he has changed his mind and that he is not going to kill the King. This makes Lady Macbeth extremely angry.

Ripping into Macbeth, she says, ''Art thou afeard To be the same in thine own act and valour As thou art in desire?'' In essence, Lady Macbeth wants to know if Macbeth is all talk or if he's willing to act.

Lady Macbeth then calls him a coward. ''Wouldst thou have that Which thou esteem'st the ornament of life, And live a coward in thine own esteem, Letting 'I dare not' wait upon 'I would'?'' Here she's asking Macbeth is if he's too afraid to make the move from 'I cannot' to 'I will,' in order to get what he wants.

Macbeth begs Lady Macbeth to stop. He tells her that, while he has always been willing to do what a man has to do, he worries about what will happen if they fail. Lady Macbeth reassures him and says, ''But screw your courage to the sticking-place, And we'll not fail,'' thereby letting Macbeth know that they will succeed if he can be brave and confident and suck it up.

After berating, Macbeth, Lady Macbeth tells him her plan. While King Duncan is asleep, she will give his attendants a lot of wine. After they've passed out, she and Macbeth will use the attendants' daggers to kill King Duncan in his sleep. Then they'll smear his blood on the attendants, making it appear as if they have killed the king.

Macbeth is amazed at Lady Macbeth's cunning and daring plan and impressed by how she managed to come up with it so quickly. As the scene ends, Macbeth finally agrees to go along with the plot to murder King Duncan.

Let's review. In ''Macbeth'' Act 1, Scene 7, we find Macbeth alone, pacing back and forth because he's having second thoughts about killing King Duncan. He has problems with this plan because he sees no reason, other than his own ambition, to murder the king. In response, a raging Lady Macbeth calls him a coward. She then tells him her plan, which includes framing the attendants for the murder of King Duncan, to which her amazed and impressed husband ultimately agrees.

In Act 1, Scene 7, of Macbeth, whom does Lady Macbeth plan to frame for the King's murder?