Margaret has taught both college and high school English and has a master's degree in English from Mississippi State University. She holds a Mississippi AA Educator License.

Act 2, Scene 2 of Shakespeare's 'Macbeth' advances the plot substantially with the assassination of Duncan. Review Scene 1 and dive into a detailed summary with quotes to better understand the significance of Scene 2. Updated: 12/21/2021
Create an account

In previous scenes of William Shakespeare's Macbeth, Macbeth and Lady Macbeth hatch a plan to murder King Duncan so that Macbeth can assume the throne. Duncan is spending the night at Macbeth's castle, and Lady Macbeth plans to get Duncan's chamberlains (grooms) drunk on wine so they'll not remember the murder. Act 2, Scene 1 closes with Lady Macbeth ringing a bell to let Macbeth know the chamberlains are asleep and he can proceed with the plan to kill Duncan. 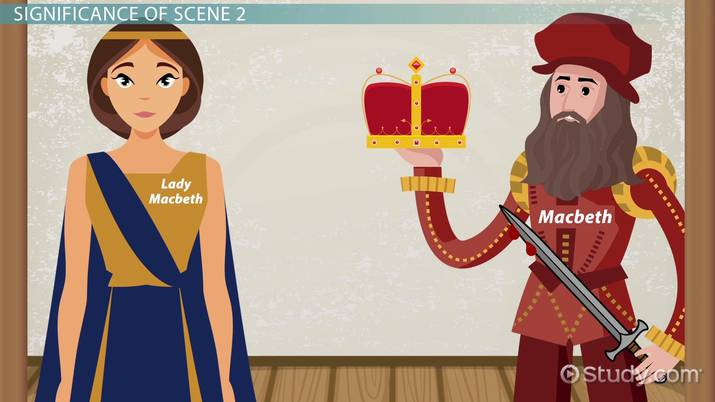 Act 2, Scene 2 is significant for a number of reasons. First, and most importantly, it's the scene in which Macbeth murders Duncan. Additionally, in previous scenes, both Macbeth and Lady Macbeth have appeared resolute in their desire to kill Duncan and seize the throne, but in this scene, we see the first traces of guilt and regret in both characters.

Lady Macbeth has placed daggers in the hands of the sleeping chamberlains to implicate them in Duncan's death, as planned. In lines 12 and 13, she says of Duncan, ''Had he not resembled/My father as he slept, I had done't.'' The plan all along has been for Macbeth to murder Duncan, but here, Lady Macbeth indicates that she would have killed Duncan herself if he had not looked so much like her father. This is the first sign of weakness in Lady Macbeth in the play.

Macbeth then enters the scene and tells Lady Macbeth that he has killed Duncan. Macbeth reports that while he was in Duncan's chamber, he heard the chamberlains awake, praying. ''I could not say 'Amen',/When they did say God bless us,'' Macbeth confesses to his wife in lines 26 and 27. In this passage, Macbeth is beginning to feel guilty about the murder and is unable to pray. Lady Macbeth suggests that he should put the matter out of his thoughts.

Line 32 focuses on sleep, an important motif in the play. From this point on, sleep becomes something the Macbeths crave. They desire to sleep more than anything, but once Duncan is murdered, sleep eludes them. ''Methought I heard a voice cry, Sleep no more!'' Macbeth says, in a passage that foreshadows the sleeplessness that will follow the couple for the rest of their short lives.

While Lady Macbeth completes the grisly task, Macbeth hears a knock at the door. This knocking continues throughout the remainder of the scene. Macbeth realizes that even the knocking makes him nervous now, and he wonders if he will ever be able to escape the guilt he feels for killing the king. ''Will all great Neptune's ocean wash this blood/Clean from my hand'' (lines 57 and 58). Macbeth's desire for cleansing himself of the deed introduces another motif, which Lady Macbeth takes up later in the well-known hand-washing scene.

Lady Macbeth returns and chastises her husband for his cowardice. She tells him not to worry because a little water will wash away the blood. Water will not, of course, wash away the guilt. The two hear the knocking again, and Lady Macbeth suggests they put on nightclothes so they will appear to have been sleeping.

Scene 2 ends with a clear indication that Macbeth already regrets the murder. When the knocking occurs again, he says, ''Wake Duncan with thy knocking? I would thou couldst!''

Act 2, Scene 2 of William Shakespeare's Macbeth is significant for the pivotal developments in the plot. In this scene, Macbeth assassinates Duncan, and he and Lady Macbeth begin to feel the repercussions of the act immediately.