Act three of the third scene in 'Macbeth' follows the encounter of three hired murderers and their intended treachery to Fleance. Follow the events of their attempted assassination, and note the humor in Shakespeare's writing in quotes from the play. Updated: 12/21/2021
Create an account

In Act 3, Scene 2 of Shakespeare's tragedy Macbeth, Lady Macbeth told King Macbeth that the murder of Duncan was done and he should let it go and rest easy. But the king told Lady Macbeth that his mind would be uneasy as long as there existed a threat to his throne. King Macbeth then told her that he had set into motion a horrible plan to take care of the threat. 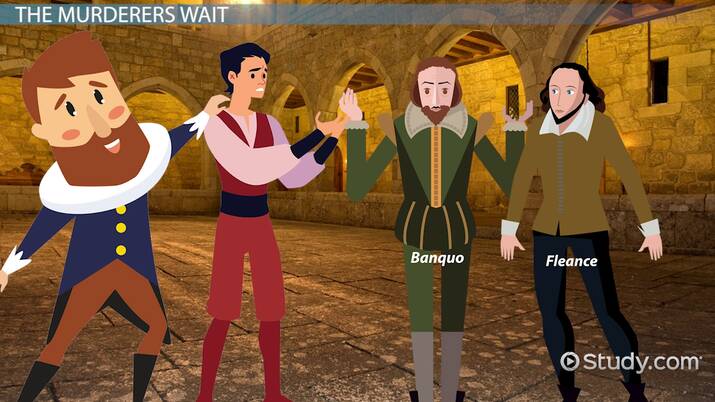 As we begin Act 3, Scene 3 of Macbeth, we see the two murderers hired by King Macbeth to kill Banquo, a general of the Scottish army, and his son Fleance. Macbeth wants them dead because he sees them as a direct threat to his throne. The witches' prophecy is that Banquo will be king and not his son, so they must die!

The murderers wait in the woods outside the king's palace. They are then joined by a third murderer, who tells them he was also hired by the king to help them. The two murderers accept him, figuring why not.

The three murderers then lie in wait for Banquo and Fleance. They expect them any minute. The first murderer says, ''The west yet glimmers with some streaks of day: Now spurs the lated traveler apace To gain the timely inn, and near approaches The subject of our watch.'' Banquo and Fleance are running a bit late, but should arrive soon.

The first murderer then wonders out loud if Banquo and Fleance will just ride by them to the palace gates. However, the third murderer, the new guy, reassures them: ''he does usually--So all men do--from hence to the palace gate Make it their walk.'' In other words, everyone usually stops and walks to the gate from where the murderers now wait.

Meanwhile, Banquo and Fleance have no idea what is about to happen to them. Banquo casually comments on the weather: ''It will be rain tonight.'' The first murderer uses this moment to pounce on Banquo, saying, ''Let it come down.'' And with that, everything breaks loose.

The other murderers join the attack. Banquo barely has time to speak. ''O, treachery! Fly, good Fleance, fly, fly, fly! Thou mayst revenge. O slave!'' As Banquo dies, he tells his son Fleance to run away so he may avenge, or seek and get revenge, Banquo's death. And just then, someone puts out the torch.

In the darkness, Fleance escapes. The third murderer, the new guy, wonders aloud, ''Who did strike out the light?'' To which the first murderer, almost comically, responds, ''Was't not the way?'' Seems Shakespeare does not want us to forget he also writes comedies.

A Job Half Done

However, the new guy, the third murderer, does not find that funny: ''There's but one down; the son is fled.'' And neither does the second murderer: ''We have lost Best half of our affair.'' He says the important part of the plot has been lost. It's almost as if he knows the real reason why King Macbeth wants Banquo and Fleance dead.

The witches' prophecy must not come true! Banquo cannot be king! But there is not much more they can do but take Banquo's body back to King Macbeth and see what he has to say about it all. ''Well, let's away and say how much is done.'' And with those words from the first murderer, they all leave and head to the palace.

Okay, let's take a moment to review what we've learned about this part of Macbeth. In Act 3, Scene 3 of Macbeth, we see the two murderers hired by King Macbeth to kill Banquo and his son, Fleance. The two are joined by a third, and they all wait in the woods outside the palace for Banquo and Fleance. As soon as they show up, the murderers attack them.

As he dies, Banquo tells Fleance to run away so he can avenge, or seek and get revenge, his father's death. In the darkness, Fleance gets away. The three murderers then see that they have failed in finishing the job, and take Banquo's body back to King Macbeth to see what he says.