What Is an Animal?

When you think of an animal, you might think of your dog, or you might even know from biology class that you're an animal too. Animals aren't just organisms that walk on four legs. Bugs, jellyfish, and even sea sponges are all animals. In kingdom Animalia, there are nine phyla, or subdivisions, of animals. Phyla are organized from the least evolved, Porifera, to the most evolved, Chordata. As we progress through the phyla, discussing some example animals along the way, you'll notice more complex body systems emerging. 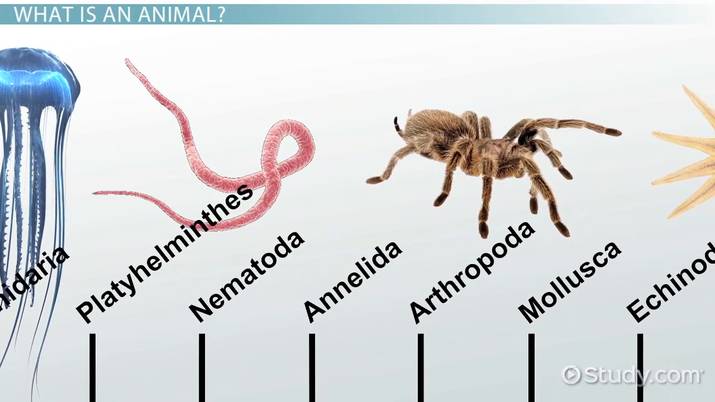 Try it now
Back
Coming up next: Exotic Animals: Definition & Names

Phylum Porifera is made up of sea sponges, which are stationary plant-like organisms we find in colorful coral reefs. But sea sponges are actually basic filter feeding animals, meaning they strain water in through their walls to capture food. They also have no definite shape, nor do they have a body cavity, like the space our organs are contained in. They're simply made of a few layers of cells organized into a column.

Phylum Cnidaria consists of jellyfish and hydras, which are squishy animals that have a more complex feeding system than Porifera. Most have some sort of tentacle with stinging cells, called cnidocytes, that can capture small prey. These organisms also have a basic nervous system called a nerve net but no brain or conscious thought. They can, however, sense their environment and respond to it.

Phylum Platyhelminthes is made up of flatworms, which have a flattened body with an incomplete digestive tract like Poriferans and Cnidarians, meaning the mouth is the same opening as the anus. The most well-known member of Platyhelminthes is the planarian, a common model animal in biology known for its ability to regenerate its body, even after being cut into many pieces.

Phylum Nematoda includes the round worms, which have a complete digestive system, a new feature in animal evolution, meaning they have separate holes for the mouth and anus. Nematodes are mostly free living, but some parasitic nematodes are more well-known to humans. The species Trichinella spiralis causes the illness trichinosis, which is transmitted by eating infected pork.

Phylum Annelida includes our classic, segmented worms, like the ones birds eat from the ground. Annelids have a complete digestive system, and even have specialized organs within it, like the intestine, esophagus, crop, and gizzard. They also have a closed circulatory system where blood is enclosed in vessels like ours as well as basic excretory organs to remove waste.

Phlyum Arthropoda is made up of all of the creepy crawly animals such as spiders, centipedes, bees, scorpions, and even insects like praying mantises and butterflies. Surprisingly, crustaceans like crabs and lobsters are also arthropods. If you look closely, you can see the similarities, including:

Arthropods have a complete digestive system but not a closed circulatory system. Their nutrients simply move around the body in a liquid called hemolymph.

Phylum Mollusca consists of the soft squids, sea snails, clams, cuttlefish, and octopi of the ocean, as well as snails and slugs on land. Most of the animals are protected by a hard shell as you can see on clams and snails. But some of the sea mollusks have other adaptations to survive. Octopi are one of the smartest invertebrates, or organisms without a backbone. They have a well-developed nervous system with a complex brain, and are able to learn puzzles and use new techniques to capture prey. These organisms are built for speed with a closed circulatory system and quickly run down prey, using their razor sharp beaks and poison to kill. Many octopi employ camouflage as well for extra stalking abilities.

Although you might not think of these animals as closely related to humans, surprise! Phylum Echinodermata includes sea squirts, sea urchins, and sea stars, and, although these animals might look a lot like plants, they're part of our closest related phylum. Although we are very different from these animals, their patterns of development are similar to other animals in the phylum Chordata, which is the one that includes humans.

Phylum Chordata is made up of the animals we know and love, including everything from fish and birds, to monkeys and lizards, to dogs and humans. Chordates have a dorsal hollow nerve tube and a notochord, which became our vertebrae and spinal cord. We also all have a muscular post-anal tail, or remnants of it, like in humans, and pharyngeal slits that will eventually become lungs in land animals. The most basic chordates are tunicates, which mostly live as immobile sea creatures. However, early on in their development, they have all the characteristics of a chordate, placing them in our phylum.

Chordates also include jawless fishes, like the hagfish. These marine animals secrete slime when threatened in order to escape from predators. Cartilaginous fishes, like sharks, evolved after the jawless fishes. They have a flexible skeleton, allowing them to whip around in the water to chase prey. Bony fishes developed a skeleton made of solid bone, like ours. These fishes live in both marine and freshwater environments, like the salmon you might see on your dinner plate.

Amphibians evolved the ability to walk on land. Some stages of their life use gills like fish, while others have lungs or can even breath through their skin. These animals must remain moist to survive and often live near water. Reptiles got around the constraint of moist skin by evolving scales. Extinct giants like dinosaurs and their close living relatives, crocodiles and alligators, are all very similar to reptiles. Interestingly, birds actually evolved from dinosaurs, with scales modified to form feathers and other adaptations allowing for flight, and are next in the evolutionary tree.

Lastly, the most evolved chordates are mammals. All mammals have hair and mammary glands, which are used to nurse their live young. All the cute and furry animals we love are mammals, from bunnies and seals, to chimpanzees and deer, to cats and dogs. And, believe it or not, whales and dolphins are mammals too. Oh and, of course, so are we!

Let's review. There are nine phyla in kingdom Animalia:

After watching this lesson, you should be able to describe each of the nine phyla in the kingdom Animalia, including defining characteristics and examples of organisms.