The idea that all living things are made up of cells which can only come from other living cells, is known as cell theory. In this lesson, we take a look at the scientists who helped to further its understanding.
Create an account

Many sciences come down to the study of very basic concepts. Chemistry examines atoms and molecules. Physics looks at forces. Biology examines cells. Cells are the tiniest units of structure that can be said to be alive. Sure, viruses are smaller, but they are the zombies of the microscopic world, stuck in a sort of half-living, half-dead existence. But cells have life!

Much of what we know about cells comes from the idea of cell theory. At its most basic level, cell theory has a few foundational ideas, namely that living things are made up of cells, cells are themselves living, and cells can only be created from other cells. The development of cell theory took time. In this lesson, we'll look at four individuals who did more for its development than anyone else. 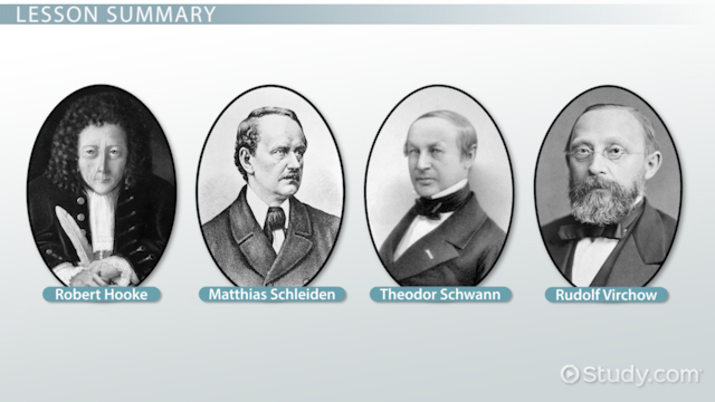 It's kind of hard to come up with cell theory without anyone knowing that cells even existed. Luckily, we have Robert Hooke, a 17th-century English scientist to thank; he discovered that cells exist in the first place. Like many other scientists from the period, Hooke dabbled in a number of scientific fields. In fact, he wrote Isaac Newton frequently about the idea of gravity and is fairly well known for his work on the forces of springs. One of the most popular new inventions of the time was the microscope, a mechanism that allowed people to examine finer details than they had ever thought possible. One day, Hooke got the idea to examine a piece of cork under his microscope. After looking, he found that the cork was made up of thousands of tiny pockets, almost like a honeycomb. He chose to describe these spaces as cells, because they reminded him of the living quarters of monks in a monastery.

Still, it would be more than 200 years until cell theory moved much further. By this point, microscopes had grown to be much more useful. Someone who would make the most of that was Matthias Schleiden, a German scientist. Originally trained as a lawyer, he was really more interested in botany. He began to examine his plants under a microscope and found that they were actually composed of the same cells that Hooke had described, no matter where in the plant the sample came from. With that information, he began to write about the importance of cells and stated that all plants were made up of cells. However, that wasn't all that Schleiden discovered about cells. He also found that they had a structure of their own, and found that the nucleus was vitally important in cellular operations.

Another German scientist, Theodor Schwann, would be the one to establish that animals were also made up of cells. Somewhat amazingly, his great discovery came as a result of dinner with Schleiden. Schleiden was talking about his work in finding out what the nucleus of a cell did, and the more that Schleiden talked about his discoveries, the more that Schwann realized that he had seen the same thing in his own lab. He rushed back to the microscope and made notes about what he had seen, firming his position as the person who discovered that animals are made up of cells as well.

Schwann had been an early student of his favorite teacher, a scientist named Johannes Peter Muller. One of Muller's last students was named Rudolf Virchow, and Virchow would finish the last bit of work on cell theory. Virchow determined that only cells can produce other cells. Somewhat unbelievably, he is thought to have plagiarized his first work in the field. Before him, many people believed in spontaneous generation, or the idea that life can literally occur without any other living source of life. However, that such a brilliant thinker such as Virchow was stating this was enough for many in the field to accept it as true.

In this lesson, we looked at four scientists who helped to pioneer the idea of cell theory. Robert Hooke first discovered cells while looking at thinly-sliced pieces of cork, giving them the name because of their resemblance to the living quarters of monks. Mattias Schleiden was the first to recognize that plants all were made up of cells, while his dinner partner Theodor Schwann extended the idea to include all animals as well. Finally, Rudolf Virchow put forth the idea that cells could only arise from other cells, putting an end to the debate about spontaneous generation.

The Building Blocks of Life

As science began to affect the minds of 17th century Europe, people began to explore what makes up the living body. With the development of the telescope, Robert Hooke discovered that cork was made up of small pockets that he would come to call cells. This discovery would lead to a chain of discoveries and observations over the years that would round out the cell theory.

Reviewing the lesson at length will prepare you to:

The Development of Cell Theory

What is Cell Theory? - Definition & Parts