Technological progression and changes in institutions across the world are major drivers that shape globalization. Learn more about globalization, the key factors leading to the proliferation of globalization and the three international institutions that impact these processes. Updated: 10/28/2021
Create an account

Meat Queen is the supreme ruler of fast food restaurants around the globe. How did they do it? They embraced globalization, or the integrating of economies across the globe through the process of procuring goods, services, and capital across the world.

We are going to study the major drivers of the globalization process and the international financial and trade institutions that have shaped this process in recent decades. Our story begins with the examination of Meat Queen's globalization adoption. 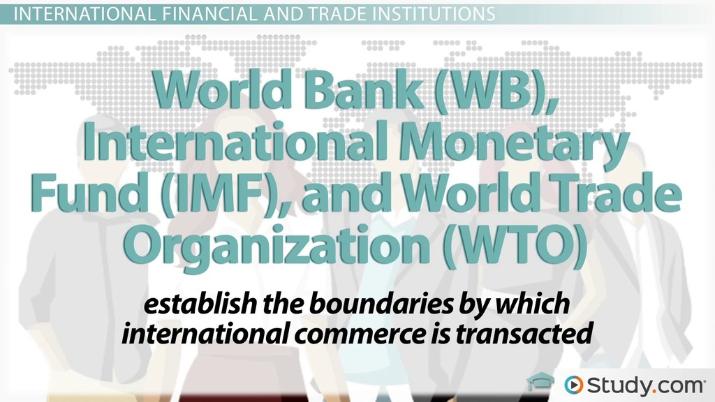 Coming up next: Government-Business Relations in Global Business

Meat Queen's globalization success can be linked to numerous key drivers of the overall process. The first factor is the benefit of technological innovation, which has allowed Meat Queen to rapidly globalize their restaurants. The company has been able to manage, reproduce, and standardize their food across the world with local sourcing of ingredients coordinated by technology, such as video conferencing and emailing with suppliers. It is also easy to communicate with employees worldwide to ensure coordinated global efforts for topics such as training.

Another major driver of globalization for Meat Queen has been the development of their transportation systems, which allow quick, affordable migration of their products across the globe. The company utilizes freight trains, ships, and even planes to transfer products to their restaurants. For example, new roads in India have allowed the company to open restaurants in that country. Previously, Meat Queen was limited by small dirt roads that did not support their trucks.

Social and political reforms have also affected the globalization of Meat Queen's business. The enormous growth in population and consumerism of countries, such as China, Japan, and India, has created opportunities for new customers globally. And the collapse of communism in Central and Eastern Europe has created even more new markets and business partnerships for Meat Queen to establish their restaurant business.

All of these drivers have allowed Meat Queen to quickly establish restaurants globally with minimal effort. Many institutions have also been responsible for corporate globalization. Let's take a look.

Meat Queen has to follow the rules of international commerce established by the World Trade Organization. The WTO was established in 1995 and created the rules for international trade. The purpose of the WTO is to develop free trade and squash any potential barriers to trade, such as quotas. For example, if one country wanted to limit the importing of U.S. potatoes for Meat Queen's restaurants, the end result could be a higher price overall for the consumer.

The World Bank is also a central factor in the growth of globalization. It was established in 1944 for the purpose of providing business loans to its member nations that help build infrastructure such as roads. Without the loans from the World Bank, Meat Queen might have been unable to establish their restaurants due to poor infrastructure.

The last institution that has helped globalization flourish is the International Monetary Fund (IMF), which is also referred to as the 'sister' organization to the World Bank. The institution's purpose is to encourage currency exchange with member countries in order for them to orchestrate global trade. It also provides loans to governments and debt relief. This institution has helped developing nations grow so that companies, like Meat Queen, will be interested in establishing businesses there due to customer potential.

Globalization is the integrating of economies across the globe through the process of procuring goods, services, and capital across the world. There are key drivers of the proliferation of globalization. They are:

There are also many international financial and trade institutions that have allowed globalization to flourish. They are the:

The Benefits of International Expansion in Business

Decision-Making in a Global Business

What is Retail Selling? - Techniques & Process

The Levels of Corporate Social Responsibility

What is Talent Management? - Definition & Process