Along with sodium, chloride, and calcium, potassium is a major electrolyte that works to maintain an intricate balance in the blood. Learn about the important signs and symptoms of hyperkalemia and hypokalemia, which are imbalances of potassium in the blood that are potentially very dangerous. Updated: 09/30/2021
Create an account

Let's be honest about something here. When you are driving around on the roads, you pay attention to some signs more so than others. For many people, a speed limit is something that is often ignored and yellow lights are an indicator to speed up instead of slow down.

But I think that most people pay attention to big red signs like the stop sign or stop light and heed those warnings. Most people's attention will be caught by a big sign saying that boulders may come crashing down at any moment.

The reason these signs are heeded more often is likely because not doing so can result in a catastrophe. Well, this lesson will focus in on one important electrolyte found in our body, called potassium, that should never be ignored for long if it's raising an alarm. 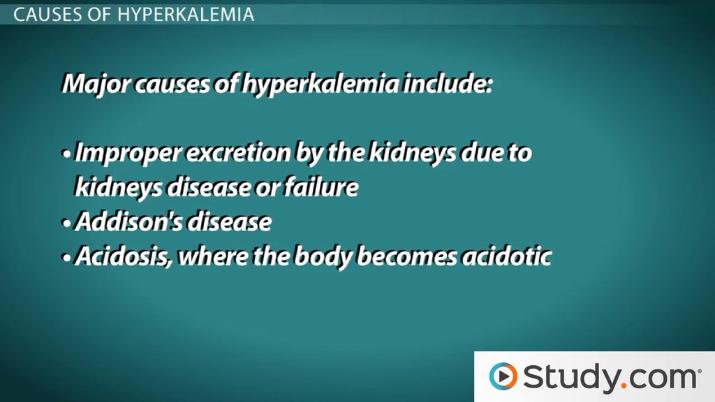 Coming up next: Major Electrolyte Levels in the Blood: Calcium

Electrolytes are substances that form ions - atoms with electrical charges, such as potassium (K+), sodium (Na+), choride (Cl-), and calcium (Ca2+) - when dissolved in our bodily fluids. These ions are critical in making sure our body functions normally. While sodium is the main extracellular (outside of cells) cation (a positively charged ion), potassium is the main intracellular (within cells) cation. Without either of them, we would be dead.

However, having too many of them can cause us to die as well. One very notable example of this is in the case of hyperkalemia. Hyperkalemia is a serum potassium concentration of more than 5.0 mEq/L. In other words, when the amount of potassium measured in our blood's serum, the part that contains electrolytes, exceeds a concentration of approximately 5.0 mEq/L, then we are entering a dangerous area.

While significant increases in any ion in our body can cause us harm, increases in some cause our body's systems to be particularly sensitive to disaster, and potassium is one of these ions.

Let's think of a real-world example where a similar situation can be the case. Let's pretend you're driving on the road again, going places you've never been. All the little buttons and gears in your car are representative of ions that help your body function. If the radio button stops working, I think you'll agree with me that you might be uncomfortable, but you'll get to your destination safely. But if your wheel deflates, then you better pull over quickly and take care of the problem right away before you crash!

Furthermore, what you need to know right off the bat is that the amount of increase, or decrease for that matter, of an ion's concentration in the body is very important in determining how critical a situation is. A tiny increase or decrease may be nothing more than a laboratory error and can be ignored. Obviously, if the increase or decrease is significant, then we need to pay more attention.

Bearing all of that in mind, hyperkalemia is like our car's tire deflating on the highway or a big giant red stop sign alerting us to a serious problem that must be addressed right away. This is because elevations of potassium can cause bradycardia, or a slow heart rate, with eventual cardiac arrest, and dyspnea, or shortness of breath, with eventual complete respiratory paralysis. All of this can happen quite quickly as well. I hope the seriousness of this has gotten your attention now.

In cases of hyperkalemia, an ECG or electrocardiogram, a procedure that measures the electrical activity of the heart, will also note arrhythmias.

Major causes of hyperkalemia include:

Hyperkalemia can also occur due to Addison's disease, aka hypocortisolism. In this condition, a decreased amount of aldosterone may be produced. Aldosterone is the hormone that tells your kidneys to reabsorb sodium and excrete potassium. If there's not enough aldosterone, then too much potassium is retained in the body. In this instance, the cause of hyperkalemia is a result of an absence of a signal for the kidneys to perform a critical role: to get rid of potassium. In our driving example, it would be akin to a red light never turning green, which would cause a backup of traffic representative of a backup of potassium in the body, since the signal for its excretion is missing.

Furthermore, acidosis, a potentially deadly condition as a result of many different causes, can cause hyperkalemia. In cases where the body becomes acidotic, that is to say acidic as a result of too many hydrogen ions (H+) in the blood, the body may try to minimize this acidosis by moving hydrogen ions into body cells and moving our normally intracellular potassium ions out of the cell in a like-for-like (in terms of electric charge) exchange. This obviously leads to hyperkalemia. It's as if the potassium ions, in this case, are like people living inside of a home that never venture outside. But if all of a sudden somebody comes into the house and kicks them out, these homebodies would be outside all over the place when they shouldn't be!

Finally, insulin deficiency or resistance, as in the case of diabetes mellitus, can also cause hyperkalemia. There's so much more to it than this, including the way diabetics are treated and other organ malfunctions diabetes may cause, but we can boil down the reason for hyperkalemia in diabetics to this for our lesson: insulin drives sugar and potassium into the cell. People with uncontrolled diabetes have hyperglycemia and hyperkalemia because there's not enough insulin or there's a poor response to insulin.

Furthermore, anything that causes cells in our body to break down in large amounts, such as a crush injury from a bad car accident, will cause large amounts of potassium to be released from within these damaged cells, resulting in hyperkalemia. This may be a disgusting example, but if you crush a tomato with hammer, all sorts of juice will squirt out of it. During a crush injury, a comparable thing occurs to your body's cells.

The other side of potassium levels in the body is hypokalemia. Hypokalemia is defined as a serum potassium concentration of less than 3.5 mEq/L.

Causes of hypokalemia are as follows:

Vomiting or diarrhea. In either case, the potassium contained within these two liquid substances is literally expelled out of the body, lowering potassium levels. But there's another thing that happens here as well. Let's say you vomit like crazy for a while due to some bad beef jerky or something. You know that when you vomit, you lose a lot of gastric acid. By losing a lot of acid, you cause alkalosis in your body. This means there are higher levels of bicarbonate (HCO3-) in your body relative to levels of acidic hydrogen ions. Your kidneys try to make up for this alkalosis by excreting out the excess negatively charged bicarbonate. Since the fluid being excreted out needs to be electrically balanced, positively charged potassium is excreted by the kidneys alongside negatively charged bicarbonate, resulting in hypokalemia.

Furthermore, excess insulin administration in a diabetic patient or due to a tumor that secretes insulin, called an insulinoma, may drive too much potassium into your cells, resulting in hypokalemia.

Finally, do bear in mind that we didn't cover all of the reasons for hypokalemia. Everything from Cushing's syndrome to heart disease to drug administration can result in hypokalemia, which may lead to muscle weakness and palpitations.

By now, you can hopefully appreciate the intricate balance of potassium in our body and the many different things that can affect it.

Hyperkalemia is a serum potassium concentration of more than 5.0 mEq/L. It may cause bradycardia, or a slow heart rate, with eventual cardiac arrest, and dyspnea, or shortness of breath, with eventual complete respiratory paralysis.

In cases of hyperkalemia, an ECG, an electrocardiogram, a procedure that measures the electrical activity of the heart, will also note arrhythmias. Important causes of hyperkalemia include kidney malfunctions, Addison's disease, acidosis, insulin deficiency, and crush injuries.

The flip side to all of this is hypokalemia. Hypokalemia is defined as a serum potassium concentration of less than 3.5 mEq/L. Causes of hypokalemia include vomiting, diarrhea, alkalosis, hyperaldosteronism, and excess insulin administration or secretion due to a tumor that secretes insulin, called an insulinoma.