East Asia is an extensive region rich with an innumerable amount of landforms. Explore the geography of East Asia, learning about some of the major mountains, valleys, canyons, rivers, and lakes dotting its landscape. Updated: 11/07/2021
Create an account

What is a Landform?

A landform is any natural feature of the Earth's surface. A mountain is a landform, as is a valley or canyon. But it's not just the height of land - coastlines, bays, rivers, and lakes are also landforms. When describing landforms, you might talk about the soil or rock type, the elevation, slope or orientation. And if you wanted to draw a map showing landforms, you would be drawing a topographical map.

East Asia is a huge area. It covers 3.9 million square miles, most of which is China. Describing the landforms of the whole area in detail would be impossible. So, today we're going to look at some of the most significant or well-known landforms in East Asia. 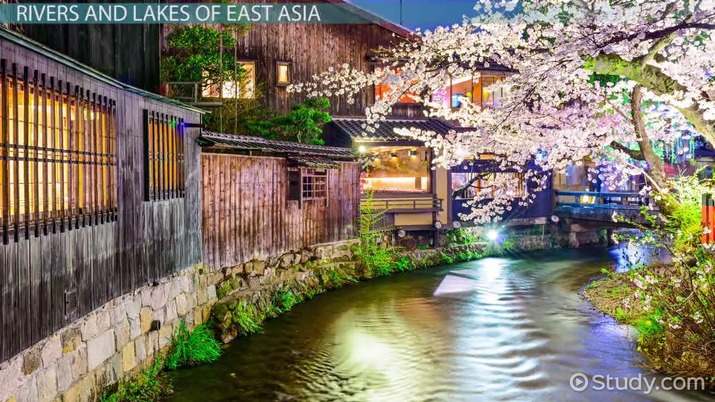 Coming up next: Geographic Influences on Migration Patterns in East Asia

China is a large country, and it is particularly rich in mountains. China includes the majority of the largest mountain range in the world: the Himalayas. The Tibetan Plateau has been part of China since it was seized in the 1960s, and it's often called the 'Roof of the World' because it has an average elevation above 16,000 feet - higher than most mountains. Mount Everest is on the border between China and Nepal; at 29,029 feet, it is the highest mountain on Earth. Other Chinese mountain ranges include the Tanggula, the Kuntunshan, the Tianshan, the Qilianshan and several much smaller ranges. Japan is also a mountainous country: around 70% of Japan is in the mountains. Most notable is the Japanese Alps range, whose highest mountain is Mount Fuji at 12,388 feet. North Korea and South Korea don't have mountains anywhere close to that large, but they do have a lot of them - mountain ranges crisscross the countries. The highest mountain in South Korea is Hallasan at 6,398 feet, and the highest in North Korea is Paektu at 9,003 feet.

China is also full of beautiful valleys, canyons and gorges. The Yarlung Zangbo Grand Canyon is probably the most famous: at an average of 16,000 feet deep and a maximum depth of 19,714 feet. It is the deepest canyon on Earth. But there are many more canyons to add to the list. From the Golden Sand River Tiger Leaping Gorge, to the Yellow River Valley that nourished ancient China, to the beautiful Grand Canyon of Nujiang River, there are too many to count. Meanwhile, the Koreas are more famous for the sheer number of valleys and canyons than their size.

Rivers and Lakes of East Asia

There are also too many rivers and lakes in East Asia to count. China has lots of them: the Yellow River, the Yangtze, the Mekong, the Salween, the Yarlong, and the Pearl. Although it's only the second longest at 3,395 miles, the Yellow River probably has the most historical importance because it provided the fertile land and water supply for ancient China. The longest is the Yangtze, which is also the third longest in the world. At 3,915 miles, the Yangtze starts in the Tibetan Plateau before reaching the sea at Shanghai. Since Japan is so much smaller a country, the longest river there is also quite small: the Ishikari, at 167 miles. The rivers of Japan are generally deep, short and fast moving. South Korea is very much dependent on rivers, which provide fertile land, and there are many of them. The most important include the Han River plain that runs through Seoul, the Pyeongtaek, the Geum, the Honam, the Nakdong and the Yeongsan. The Nakdong is the longest of the rivers at 324 miles. The longest river in North Korea is the Amnok River at 490 miles.

China has many lakes, including four that are larger than 1,000 square miles in area. Those four are, from largest to smallest, Quinghai Lake (which is a saltwater lake), Xingkai Lake, Poyang Lake and Dongting Lake. Qinghai Lake is a full 1,676 square miles in size. The largest freshwater lake in Japan is Lake Biwa near Kyoto, but is only 259 square miles in size. North Korea and South Korea have mostly small lakes, because there isn't much glacial activity, and the Earth's crust in the Korean Peninsula is stable.

A landform is any natural feature of the Earth's surface. A mountain is a landform, as is a valley or canyon. But it's not just the height of land - coastlines, bays, rivers, and lakes are also landforms.

China is a large country and has a lot of mountains. China includes the Himalayas, which is the largest mountain range in the world. Mount Everest is between China and Nepal and is the highest mountain in the world at 29,029 feet. Other Chinese mountain ranges include the Tanggula, the Tianshan, the Kuntunshan and the Qilianshan. About 70% of Japan is in the mountains, including the Japanese Alps range, with a highest point at the summit of Mount Fuji (12,388 feet). North Korea and South Korea have numerous mountains, but they're much smaller.

China is has a great many valleys, canyons and gorges, too. The Yarlung Zangbo Grand Canyon has a maximum depth of 19,714 feet and is the deepest canyon on Earth. There's also the Golden Sand River Tiger Leaping Gorge and the Yellow River Valley (that nourished ancient China). The Koreas are more famous for the large number of valleys, though they're not notably large in size.

Important rivers in China include the Yellow River, the Yangtze and the Mekong. The Yellow River has the most historical importance, providing fertile land and the water supply for ancient China. The Yangtze is the longest at 3,915 miles. The longest river in Japan is relatively small: the Ishikari at 167 miles. The rivers of Japan are deep, short and fast moving. South Korea is heavily dependent on rivers, and there are many of them. The Nakdong is the longest at 324 miles. The longest North Korean river is the Amnok River at 490 miles.

By the time you are done studying this lesson, you could have the knowledge required to:

Impact of Resources on the Movement of Products, Capital & People in South Asia

Major Landforms in the United States

The Economy of Europe