South Asia spans over 1.7 million square miles and includes one of the largest mountain ranges. Explore the land of South Asia, learning about its rivers, valleys, mountains, canyons, plains, and plateaus, as well as landforms unique to the Maldives and Sri Lanka. Updated: 11/07/2021
Create an account

What is a Landform?

South Asia, otherwise known as the Indian subcontinent, is the area usually considered to include India, Pakistan, Nepal, Bhutan, Bangladesh, Sri Lanka, and the Maldives. These countries combined stretch over 1.7 million square miles. Today, we're going to talk about the major landforms of this area. But first of all, what exactly is a landform? 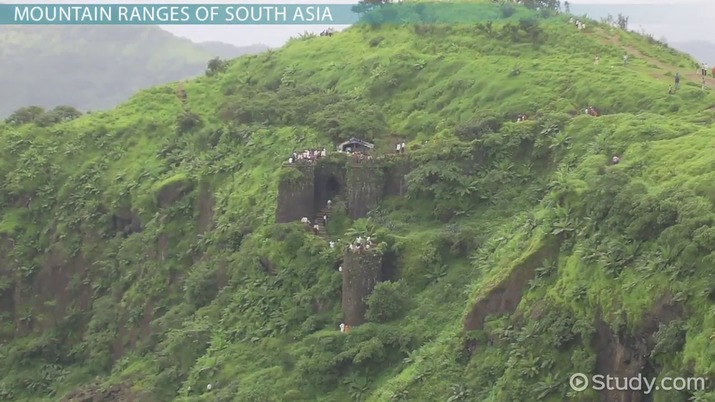 Coming up next: Geographic Influences on Migration Patterns in South Asia

Rivers and Valleys of South Asia

Rivers are vitally important to South Asia. If the rivers dried up tomorrow, many people in the area simply wouldn't be able to survive. They provide water, but they also provide fertile lands on their flood plains. The rhythm of life in the subcontinent is centered on the flow of the rivers and the coming of the monsoon rains.

The 1800-mile-long Brahmaputra has its source in Tibet in the Himalayas, like most South Asian rivers, and then passes through India and Bangladesh before reaching the sea at the Bay of Bengal. The lower parts of the river are sacred to Hindus, of which there are many in India. Considering how deeply the river influenced life in the area, this probably isn't surprising.

The Ganges has a similar course to the Brahmaputra, flowing through India and Bangladesh, though it isn't quite as long. It is, nevertheless, the most sacred river of all Hindu rivers. Sadly, it's heavily polluted these days, but remains vital for life in the area.

But the longest river in South Asia is the Indus River in Pakistan, at an impressive 1,988 miles. The Indus River is notable as much for the past as the present. Yes, it's important to this day for the same reasons as the Indian rivers we talked about previously. But the Indus River Valley has huge historical significance, too. The valley was home to the ancient Indus Valley Civilization, one of the first agrarian (or farming-based) societies in human history. The river could be seen as one of the cradles of modern civilization.

Mountains and Asia go together like wine and cheese. The Himalayas are the largest mountains in the world, found across the northern part of South Asia. The largest mountain in South Asia is therefore, also, the largest mountain in the world: Mount Everest in Nepal, at 29,035 feet. This is followed closely by K2 in Pakistan. While K2 is smaller, it's usually considered to be harder to climb, particularly in terms of technical skill. There are another 12 mountains in Nepal, India, and Pakistan that are over 25,000 feet, many of them on the border with China.

While the Himalayas are the heart of mountainous South Asia, there are other notable ranges. The Vindhya Range in central west India is small, but of historical and mythological significance. They formed the border between civilizations and were described as dangerous and unknown lands, full of demons and cannibals, and impassable due to the dense forest found on their slopes. They're even mentioned in the Indian national anthem, along with the Himalayas.

The Hindu Kush Range is another significant one, found in northern Pakistan. They've had strategic importance since at least 500 BCE and formed an unofficial dividing line between Russian and British areas of influence during the Cold War.

Last of all, there are the Eastern and Western Ghats, which run along the east and west coasts of India. The Eastern Ghats contain many ancient Buddhist ruins, and the Western Ghats are one of the largest areas of biodiversity in the world.

Asia has some of the most impressive canyons in the world, though you have to go a little further north than South Asia for many of them. But there is one particularly famous gorge called the Kali Gandaki Gorge in Nepal. Depending on how you measure it, it could even be considered the deepest gorge in the world, reaching 18,278 feet in depth if you measure from the top of the mountains on each side. The gorge was traditionally a major trade route between Tibet and India. People carried their wares along the banks of the Kali Gandaki River that lies at the bottom.

The largest plain in South Asia is the Indo-Gangetic Plain, at almost a million square miles. These plains are the areas covered by the major rivers we've talked about: the Indus, Ganges, and Brahmaputra. It's these plains that contain fertile soils and provide for the farming people of the Indian subcontinent. The main crops are rice and wheat.

Being such a mountainous area, South Asia also contains many important plateaus. The Karnataka Plateau, in south central India, and the Deccan Plateau, a little north of that, are volcanic plateaus that collectively make up most of southern India. The Karnataka Plateau is an average of 2600 feet above sea level and is home to India's largest waterfall.

Perhaps mountains, rivers, and valleys are the most important landforms in South Asia, but the Maldives and Sri Lanka have their own distinctive landscapes. Their landforms of note are coasts, islands, atolls, and reefs. There are around 1,190 islands in the Maldives, all with their own coasts and features to explore. And Sri Lanka is home to beaches, lagoons, coastal plains, and deep valleys and gorges in the center.

South Asia is the area usually considered to include India, Pakistan, Nepal, Bhutan, Bangladesh, Sri Lanka, and the Maldives. A landform is any natural feature of the Earth's surface. This includes mountains, valleys or canyons, lakes, coasts, and rivers.

The Indus and Ganges river valleys are probably the most famous in South Asia. Without them, much of the farming that happens in India and Bangladesh would not be possible. But when it comes to size and impressiveness, Kali Gandaki Gorge in Nepal may win the first prize. Depending on how you measure it, some say it's the deepest gorge in the world. From the top of the mountains on each side, it reaches as much as 18,278 feet in depth. Other mountain ranges include the Vindhya Range, the Hindu Kush, and the Eastern and Western Ghats.

There are also important plateaus: the Karnataka and Deccan Plateaus are volcanic plateaus that, together, make up much of southern India. The Karnataka Plateau contains the largest waterfall in India.

Important landforms of Sri Lanka and the Maldives include valleys, gorges, coasts, islands, atolls, and reefs. There are around 1,190 islands in the Maldives, so there are many features to explore.

Make it your intention to accomplish these goals when the lesson concludes:

Impact of Resources on the Movement of Products, Capital & People in South Asia