The Mesopotamians are responsible for some of early civilization's greatest achievements. Explore major advances in ancient Mesopotamian architecture, agriculture, transportation, and writing. Updated: 12/14/2021
Create an account

When you're the first to do something, you've got the opportunity to set lots of precedents. George Washington was the first American president and set the precedent of a two-term limit. John Rockefeller was the world's first billionaire and set a precedent that the wealthy should be actively involved in charity. Copernicus was allegedly the first person to systematically start buttering bread and set the precedent of us still doing that.

The point is, when you come first, you get to start some important trends. Nobody could have appreciated this better than the people of ancient Mesopotamia. This region, located in the Middle East between the Tigris and Euphrates Rivers, is considered the birthplace of modern civilization. As the home of both the Sumerian and Akkadian peoples, Mesopotamia was where the world's first major civilizations were developed, which set some pretty important precedents for the rest of human history. 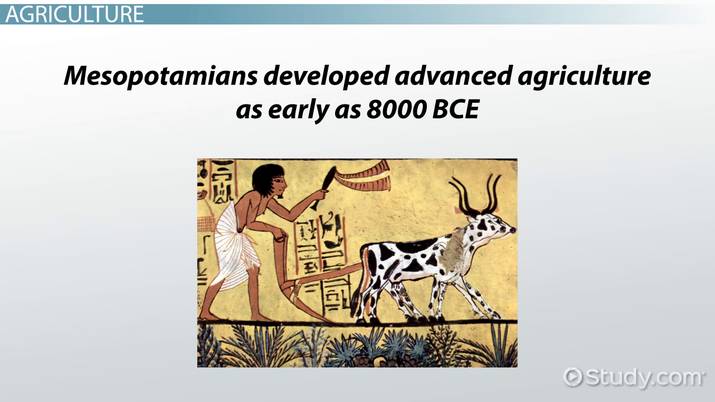 Try it now
Back
Coming up next: Ancient Spoken Languages: Common & Semitic Languages

When talking about the precedents set by the world's first major civilizations, a good place to start is with architecture. After all, large civilizations have large populations, and architecture quickly became one of the most important sciences of ancient people. Not only do you need to have houses for your citizens, you've also got to have warehouses for food supplies, barracks for armies, temples for worship, and palaces for leaders. In fact, the ability to conceive of and construct architecture for such diverse purposes and of such varying appearances is one defining trait of a civilization.

By the 4th millennium BCE, ancient Mesopotamians were constructing large, organized cities guarded by sizable gates and walls and centered around a massive temple called a ziggurat. Ziggurats were meant to look like mountains, due to the belief that mountains were the closest that humans could get to the land of the gods. In fact, ziggurats were the first monumental-scale architectural programs in the world, pre-dating the Pyramids of Giza by about a millennium. So, the Mesopotamians built large cities on an organized plan with massive temples.

However, to accomplish this, guess what they needed to invent first? Math! None of this would be possible without an organized, consistent system of math, which was organized around a base 60 system, similar to our mathematical system of base 10. Why do we divide an hour into 60 minutes, and a minute into 60 seconds? Why is a circle 360 degrees? Thank the Mesopotamians!

Now, with such a large population, you're going to need food; lots and lots of food. The region of Mesopotamia is very fertile, but even so, the ancient people needed to be able to grow more crops than they had farmers, since civilizations also have soldiers and priests, builders and merchants, and artisans and rulers who are involved in things besides farming.

Mesopotamians developed advanced agriculture as early as 8000 BCE, which allowed for the rise of major cities. To work the soil, they developed plows. To predict the weather and best times for crops they watched the stars, recorded seasonal changes, and created almanacs. But, most importantly, they learned how to divert water away from the rivers. With the invention of dams, aqueducts, and other systems of drainage, Mesopotamian farmers could plant crops all across the region, not just near the rivers. These systems of irrigation made it possible to grow the amount of food needed to sustain major population centers. And what did they plant? Many important crops, including cereals like wheat and barley, were first domesticated by Mesopotamians.

Okay, we've got a place for people to live, and we've got food for them to eat. So now let's talk about how we move things around. The Mesopotamian societies were among the first to really appreciate the link between civilization and transportation, and they put some serious effort into increasing their ability to move people and supplies more efficiently.

While we don't know exactly when or where the concept of the wheel was invented, the Mesopotamians were amongst the first to use it, first for molding pottery and then to create chariots and carts around 3200 BCE. Just think of what the wheel could mean to ancient people. Whether it's the ability to transport crops to the market, or the ability to move warriors across an empire, the wheel changed human history.

But, the Mesopotamians weren't done there. Now, if your society is located between two major river systems and not far from the Mediterranean and Red Seas, what might be useful? Boats! The Mesopotamians greatly increased boat technology in the ancient world, developing concepts like sails to help power their ships and increase the distance they could travel.

There's one other thing we simply cannot overlook when talking about Mesopotamian achievements, and that is writing. Researchers debate whether the Sumerians or ancient Egyptians figured it out first, but writing is a pretty useful skill for a large, organized society to have.

The Sumerian written language, developed in the 4th-century BCE, was called cuneiform, and is characterized by little wedge-shaped letters that were pressed onto clay. So, what did they write? The Sumerians and other Mesopotamian groups recorded crops and taxes, created massive monuments with royal decrees, proclamations, and the world's first legal codes, and wrote down their own histories. However, they also started the practice of writing down stories.

Perhaps the most famous of these stories is the Epic of Gilgamesh, written around 2100 BCE. This epic poem, a style of writing that would be copied for millennia, is generally considered the first great work of literature and tells the story of Gilgamesh, king of the Mesopotamian city of Uruk, during his quest for eternal life. It mixes elements of history and the supernatural as Gilgamesh battles monsters and gods to learn that humans cannot be immortal, but their legacies can. Seeing as how the moral of this story came from the society that first defined the concept of civilization, I think it's safe to assume they knew what they were talking about.

Let's quickly review what we've learned. The people of ancient Mesopotamia, the area between the Tigris and Euphrates Rivers, set many important precedents. Chief amongst them was the concept of civilization. As the first substantial population centers, Mesopotamian cities developed advanced architecture, advanced agriculture, transportation technology, and even such important practices as formal systems of math and writing. Their example helped establish the practices needed to develop advanced societies around the region. Sometimes it pays to go first.

Golden Age of Egypt History & Facts | What was the Old Kingdom in Egypt?

Sumerian Social Structure & Facts | How were the Social Classes of Sumer Organized?

Golden Age of Egypt History & Facts | What was the Old Kingdom in Egypt?

Sumerian Social Structure & Facts | How were the Social Classes of Sumer Organized?