The juvenile court system addresses court cases that involve individuals under the age of 18. The system is over 100 years old, and the US Supreme Court cases that have impacted this system will be explored here. 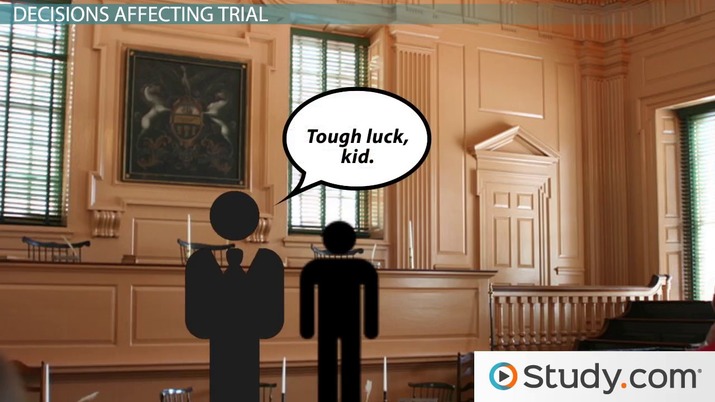 Coming up next: Comparison of the Juvenile & Adult Systems of Justice

In 1963, the US Supreme Court established that every citizen, including a juvenile, has the right to have an attorney in a criminal proceeding via Gideon v. Wainwright. Because of this case, the juvenile's attorney is integrated into the structure of the juvenile court process. The attorney answers any questions a juvenile may have and represents their legal rights in court. Also involved in the process is the juvenile's guardian ad litem, who is appointed by a juvenile court judge to represent and notify the court of the best interest of the child. The attorney is appointed at the very beginning of the pre-trial process.

Depending on the seriousness of the offense and the juvenile's age when he committed the offense, he may be facing a bindover. A bindover is a proceeding to determine if the juvenile should be tried as an adult in court instead of as a minor. Bindovers are mainly done in serious cases, such as murder. This bindover proceeding to determine where a juvenile case is held has not always existed. The US Supreme Court, in 1966, ruled in Kent v. United States that a juvenile is entitled to a hearing where his attorney can have access to all records and in which the court provides a written statement of all the reasons for the bindover to the adult system.

Today, the structure of the juvenile court remains essentially the same as it did decades ago. When a juvenile gets processed into the system, the juvenile can be held in custody at a detention home throughout the entire court process without having bond. The juvenile court system places a large emphasis on moving the cases quickly, however, so pretrials and court hearings are set in a speedy manner. At the conclusion of a trial, or if there is a guilty plea in a case, the juvenile is then adjudicated, if the judge makes a determination that the juvenile committed a delinquent offense.

This was not always so. Through the US Supreme Court case In re Gault in 1967, these constitutional trial rights were settled. In that case, Gault was on probation. He was charged with having made obscene phone calls to a female. He was adjudicated without a trial. The US Supreme Court ruled that in cases that could result in incarceration for a juvenile, that they had the same trial rights as an adult, such as a right to a lawyer, to question witnesses, and the right against self-incrimination.

Even after In re Gault was decided, the weight of the evidence required to adjudicate a juvenile had not been settled. It wasn't until In re Winship was decided in 1970 that the US Supreme Court ruled that, just as in adult court, juveniles had a right to have their cases proved by proof beyond a reasonable doubt before they could be adjudicated. This serves to protect the juvenile's due process rights through the US Constitution.

After the adjudication, the juvenile court disposes of the case. The point of disposition is not to punish a juvenile who has been adjudicated of the offense. The point is to find a good avenue to rehabilitate him. This is also called 'sentencing' in the adult system.

In 2005, Roper v. Simmons was decided by the US Supreme Court. This case stands for the proposition that a juvenile who has been charged with murder before the age of 18 cannot be sentenced to death as it is violative of the US Constitution. In this case, a 17-year-old boy was convicted of robbing a woman in her home, kidnapping her afterwards, and throwing her off a bridge to her death. The US Supreme Court stated that it is cruel and unusual punishment to sentence a juvenile to death because of their lack of maturity and their ability to change.

Graham v. Florida was decided by the US Supreme Court in 2010. This case involved a 17-year-old juvenile who was adjudicated of robbing a restaurant. The court, after several probation violations, sentenced the juvenile to life in prison without the possibility of parole. On review to the US Supreme Court, the Court decided that the sentencing of a juvenile to this sanction was a violation of the Eighth Amendment to the US Constitution and constituted cruel and unusual punishment.

Both of these cases support the main theory of the juvenile system: that the purpose of the juvenile court is to rehabilitate juvenile offenders, not punish them. The doctrine of parens patriae, meaning 'parent of the country' is the guiding light to allow the state courts to follow the 'best interests of the child' in determining what would help the juvenile become a productive member of society. In both of these cases, the US Supreme Court focused on statistical and psychological information that juveniles have a greater ability than adults to effectuate behavior change. Additionally, the Court found insurmountable evidence that supported the theory that juveniles could change for the better and deserved a second chance.

Once the video is finished, you should be able to: