Using plural nouns in Spanish is done quite differently than in English. Explore Spanish grammar rules and learn how to make Spanish nouns and their definite articles plural, discover how to address a mixed group of different genders, and put into practice what you've learned with a final activity. Updated: 08/25/2021
Create an account

Well, you've learned about el libro and la mesa, but we're not always talking about just one thing. Singular is great, but what about plural? What if we want to say books, tables, countries or cities? Vamos, let's find out. It's easy if the word ends in a vowel. For any word that ends in a vowel, just add '-s:'

Let's stop here for a moment, because, if you realize it yet or not, you're about to have a question for me! Over there's a group of guys (chicos), and over there's a group of girls (chicas), right? Which leads us to the inevitable question: what if it's a group of guys and girls together? Well, then Spanish goes back to the original '-o' sound. A group of guys and girls together would be described as los chicos even though there are chicas in the group. Thus, you use the masculine plural form of the noun to describe any group that includes both males and females.

Now, let's move on. Words that end in consonants are a little different. Instead of just adding '-s,' you add '-es:' 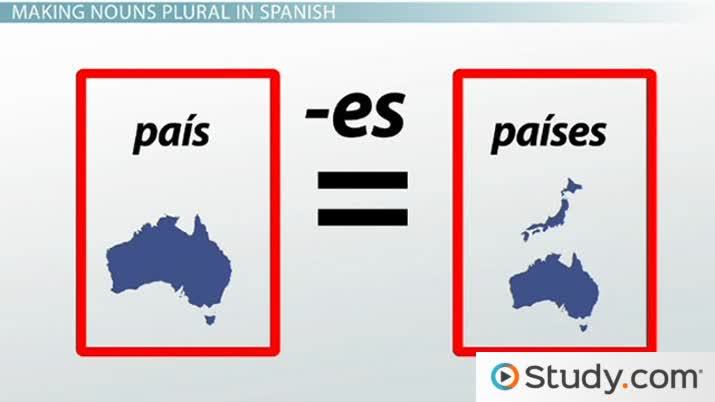 Coming up next: The Parts of the Body in Spanish

Now we need to put it all together. Think of it like a puzzle. All the pieces have a place and they all have to fit!

Let's see: libro. How do we make it plural? Well, does it end in a vowel? Yes. So we know we add -s. Libros. Now, is it masculine or feminine? Masculine. So, which definite article goes with masculine, plural nouns? Los! So, los libros means 'the books.' Los matches libros. For all you science people out there, think of it as a chemical equation - it has to be balanced. El does not match libros. This would be a lopsided equation! Los, however, matches libros. Fantástico! Now, it's balanced.

On to mesa. How do we say more than one mesa? Does it end in a vowel? Yes, so just add -s. Is it masculine or feminine? Feminine. Which definite article is feminine plural? Las! Las mesas means 'the tables.'

How about profesor in the plural form? Does it end with a vowel? No, it ends with a consonant. So, we can't just add -s. We have to add -es. Profesores. Is it masculine or feminine? Masculine. Which definite article is masculine plural? Los. Los profesores means the professors.

One more - lápiz. Plural? Lápizes? Wait a minute, rewind! Lápiz ends with a z. We change z to c and then add our -es. Much better. Lápices. Now, is it feminine or masculine? Masculine. Definite article? Los. Los lápices. Fantástico! Wow! We've covered a lot in this lesson.

Whew! And this is how you make nouns plural in Spanish. Hasta luego!

Finishing this lesson should enable you to:

Hay: Saying How Much & How Many in Spanish

Spanish Idioms to Describe Weather and the Seasons

Spanish Vocabulary: Learning the Rooms in the House