Michele is presently a part time adjunct instructor at Faulkner University in the Counselor Education Department where she teaches Measurement and Assessment and Diagnosis and Treatment. I formerly taught at the University of West Alabama where I taught School Counseling and College Student Development Counseling. I was also the Student Success Coordinator for the College of Education.

Even if you start college as an undeclared major, you can still graduate on time. Explore what it means to have an undecided major, review the concept of general curriculum, discover how freshmen orientation can help, and understand that there's no rush to choose a major. Updated: 10/06/2021
Create an account

Kristi is in her freshmen year of college. She is still an undecided major. She and her parents are concerned that if she does not make a decision soon, she will be really behind her schedule of when she should graduate. Her parents are in a tight financial situation, and they are pressuring her to declare a major, and her friends tease her because she does not know what she wants to major in.

Kristi was talking to her friend, Jane, about her indecision. Jane recommended that Kristi talk to a career counselor in the Career Center. Kristi did just that. Kristi met with the Career Counselor, who began by assuring Kristi that it was not unusual as a freshman for her not to know what major to pursue. She told Kristi that 50% or more of students will change their major at some time in college. By delaying choosing a major, Kristi is less likely to change her mind later. 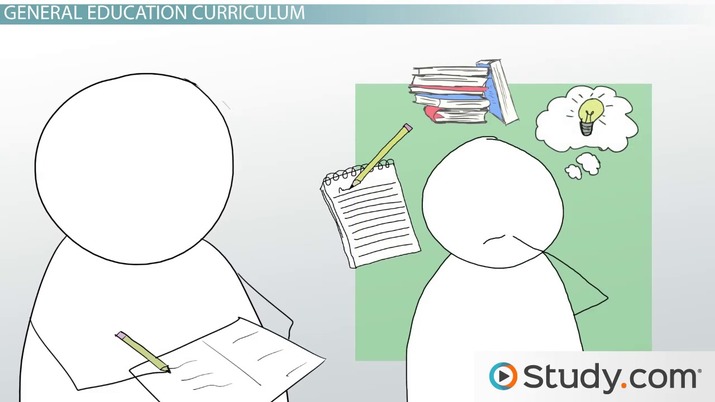 Coming up next: Supplementing Your Major: Double Majors and Minors

The Career Counselor explained to Kristi that in most majors you will be taking general curriculum courses your first two years. The general curriculum is a program of study that teaches students to conduct research in the arts, humanities, social sciences, and natural sciences. It also exposes students to diversity and appreciation of many cultures. During the general curriculum courses, students develop the ability to make critical and logical assessment of information, learn to deliver well thought out and persuasive arguments and acquire the knowledge to problem solve. The general education curriculum is designed to give all college graduates a well-rounded background and not just knowledge in the major.

All students should know something about mathematics, science, history, and English. In fact, if she were to go to graduate school, the entry exams would require her to have a broad knowledge in several subjects. In the early days of American colleges, students went to college for a broad education. Most students who went to college came from wealthy families and wanted to be educated rather than trained for a profession. As the economy has changed, it seems that companies are asking for people with technical backgrounds. It has been found, though, that these companies still value the critical thinking, decision-making, reading and writing skills students learn in their liberal arts courses.

Kristi came to realize that even if she chose a major that had different requirements than the general curriculum, she would not be too far behind as long as she made a decision by her junior year. Kristi would begin meeting with the counselor on a weekly basis and explore career interests and options.

The counselor also explained that Kristi's freshmen orientation class would be discussing career decision making and meeting with the deans of the different programs, which might be beneficial. Kristi would be able to talk to other students who were also trying to choose a major and ask her instructor questions as they occurred.

The counselor also explained that it is more important to find the right major, than to choose a major just to have a declared a major. In the long run, it is better not to declare a major right away, than change majors several times. When you change your major several times, you do get behind in your coursework.

Kristi left the counselor's office feeling better. She was excited about her general curriculum courses. She had plans to meet with the counselor for the next several weeks and hoped by the end of her sessions, she would know what her major would be. If not, she realized she had plenty of time to decide. The counselor also reassured her that even if she had difficulty choosing a major her junior year, she could take a heavier load each semester, attend summer school or take some online courses until she could catch up on her credit hours.

Kristi learned that as long as she takes her general curriculum courses her freshman and sophomore year, she should not be behind in her coursework. This gives her the opportunity to decide on a major without continuous pressure to do so. She is meeting with the Career Counselor and taking a freshmen orientation class, which will help her make a good decision. Even if she has to make up coursework before she graduates, it will be very little and can be made up by taking a heavier load, attending summer school or picking up classes online.

No matter how long it takes to decide on a career, the ultimate goal is to choose a major you enjoy and have the aptitude and skills necessary to succeed. When you have done that, you will be excited about your coursework, and it will fly by.

After watching this lesson, you should be able to discuss how general education courses give a student time to decide what to major in at college.

Karl Marx's Theories on Capitalism & Socialism | What did Karl Marx Do?

How to Compress Your PowerPoint Presentation

What is Negative Feedback | Definition & Examples

Concave Mirror Examples & Formula | What is a Concave Image?

The Importance of Motivation in an Educational Environment

What Can I Do with a Humanities Degree? - Typical Courses & Careers

Distance and Displacement in Physics: Definition and Examples