Though Malcolm is a minor character in Shakespeare's ~'Macbeth,~' he's the rightful heir to the throne of Scotland. Through character analysis, explore how this character changes, matures, and impacts the events in the play. Updated: 09/07/2021
Create an account

Macbeth is a tragedy written by the popular author William Shakespeare. The play tells the story of the murder of King Duncan at the hands of the general Macbeth, who then becomes king. Instead of avenging their father's death, Malcolm and his brother Donalbain flee Scotland out of fear for their own lives. 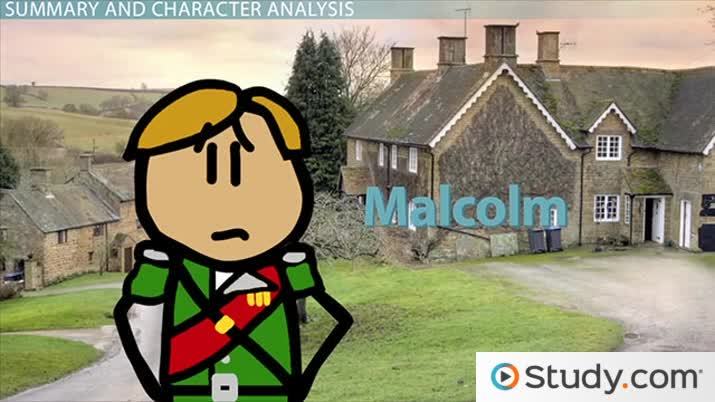 Coming up next: Banquo in Macbeth: Character Analysis, Death & Characteristics

After two generals, Macbeth and Banquo, defeat two armies who were trying to invade Scotland, King Duncan wants to honor them. Shortly after their victory, three witches told Macbeth and Banquo they would gain positions of power in the future; in fact, they were told Macbeth would become king. When Macbeth tells his wife about what the witches told him, she convinces Macbeth to kill the king in order to overtake the throne.

Malcolm is King Duncan's oldest son and the heir to the throne of Scotland. After his father dies, Malcolm is afraid for his life and confused about his role. Instead of stepping in to become king, he leaves Scotland and goes to England. Malcolm states, 'this murderous shaft that's shot, hath not yet lighted, and our safest way is to avoid the aim' (Act 2, Scene 3).

In England, Malcolm matures significantly. He gathers an army to battle Macbeth's army and regain his throne with the help of one of his soldiers, Macduff. Before trusting Macduff, Malcolm tests his loyalty. Malcolm displays a cunning nature when he makes Macduff believe he (Malcolm) is a bad person with bad intentions for Scotland.

Macduff is a nobleman from Scotland who joins Malcolm's army because he is loyal to Scotland and wants Macbeth removed from the throne. Macduff is very supportive of Malcolm and Scotland; he makes Malcolm feel courageous and capable and greatly contributed to Malcolm's ability to overtake the throne. Once he realizes Macduff was a genuine person who wanted to overtake MacBeth, Malcolm teams up with him to regain the throne of Scotland. In battle with Macbeth, Macduff kills and beheads him. Malcolm is then pronounced King of Scotland.

Over the course of the play Macbeth, Malcolm, the rightful heir to the throne of Scotland, grows and matures into a respected leader. In the beginning of the play, Malcolm is timid and weak. He is not a leader and flees in fear after the death of his father. After he matures, Malcolm is able to built an army and regain the throne to create peace and order in Scotland.

After watching this video on Macbeth, your goal should be to:

Who assists Malcolm in defeating Macbeth to regain the throne of Scotland?