During middle age, people's ability to reproduce declines and sometimes even stops. In this lesson, we'll look at climacteric and menopause, in addition to what it's like to go through climacteric changes for both men and women.
Create an account

Tanya is 50 years old, and her life is pretty nice. She's got a great husband, Travis, who loves her very much. She has two kids in college. She has a great job. But Tanya is feeling a little odd recently. She has been experiencing hot flashes and discomfort, and her periods are coming less and less frequently.

Tanya is in middle adulthood, also called middle age, which is the time of life from age 40 to age 65. During this time, people experience all sorts of exciting things. They often are at the peak of their career, their family is growing and they are nearing retirement.

But there are also some physical changes that can come along with middle age. Wrinkles and gray hair appear, and many people put on weight. In addition, people in middle adulthood go through a transitional period where fertility declines, known as climacteric. Let's look closer at climacteric changes in both women and men. 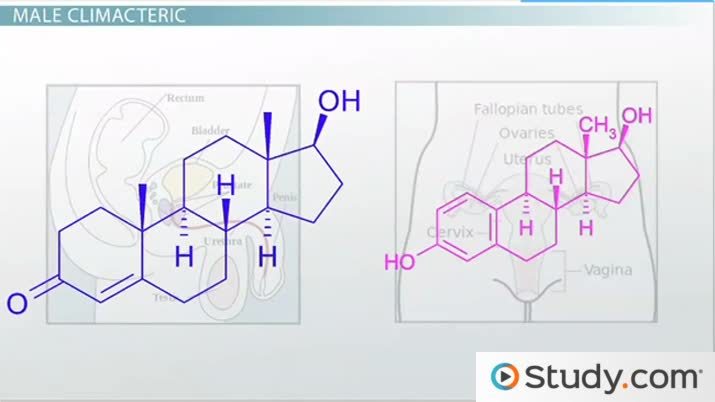 Coming up next: Health and Fitness in Middle Adulthood

Tanya has been experiencing some uncomfortable physical symptoms. She'll be fine and then suddenly feel really hot, which is known as a hot flash. She's having trouble sleeping, and her periods are coming less and less frequently.

The female climacteric ends with menopause, or the end of a woman's reproductive capacity. Women, like Tanya, stop having periods and are no longer able to have children.

Climacteric and menopause can be a tough time for a woman. Like Tanya, many women experience uncomfortable physical sensations. But there are also psychological considerations. If a woman sees the ability to have children as a major part of being a woman, she might feel depressed when she loses that capability.

The physical changes can be alleviated in many ways, including hormone replacement therapy, which is often considered controversial, as well as lifestyle and diet changes. But the psychological impact of climacteric and menopause is harder to treat. Talking to a counselor can help women, like Tanya, get through this part of their lives and move on to a new and exciting chapter.

Tanya isn't the only one going through changes. Though many people have heard of menopause and know that women lose the ability to reproduce as they age, a lot of people don't know that men, too, go through a climacteric in middle adulthood.

One of the major roles that testosterone plays in a man's reproduction is in his ability to get and sustain sexual arousal. Travis is having problems becoming aroused and staying aroused long enough to have sex with Tanya. This makes him feel frustrated and depressed.

Just as many women equate being a woman with the ability to have children, many men associate being a man with sexual prowess. As impotence and other erection problems become more and more common in middle age, many men struggle psychologically to deal with the changes.

Unlike Tanya, Travis (and men like him) don't go through a menopause-like ending of reproduction. Men continue to be able to reproduce throughout their lives. But a man's sperm count decreases as he ages, starting at around age 40. This means that, though he can still impregnate a woman, it is more difficult for older men to reproduce.

Middle adulthood is the time of life between ages 40 and 65. During this time, humans experience a decline in the ability to reproduce, a process known as climacteric. In women, the climacteric involves lower levels of estrogen and ends in menopause, or the end of the capacity of women to reproduce. Men, too, experience climacteric, which for them involves lower levels of testosterone and a lower sperm count, making reproduction difficult but not impossible.

Fluid & Electrolyte Balance in the Body

Inhibitors of Protein Synthesis: How Antibiotics Target the Bacterial Ribosome