The male gamete, described as the sex cells of the plant, are inside pollen grains used for fertilization. Learn about the different types and concepts, and discover the complexity of male gametes in plants. Updated: 09/13/2021
Create an account

Gametes can be described as sex cells of plants. Like humans, plants have sperm and egg cells that need to fuse in order to produce a zygote, or fertilized egg. Unlike humans, however, plants produce both types of these cells.

The ovary of the plant produces the female ovule, or egg cell. The male sperm cell is generally encased by some sort of enclosure, like a pollen grain. This allows the egg and sperm cells to stay moist and safe from destruction.

The complexity of the different types of gametes will be seen shortly. However, they do have some commonalities; for example, each contains a sperm cell or, in some cases, multiple sperm cells. These sperm cells are all formed by a specialized cell division and, in the case of vascular plants, are usually encased by some sort of protective shell that also contains nutrients for the cell. 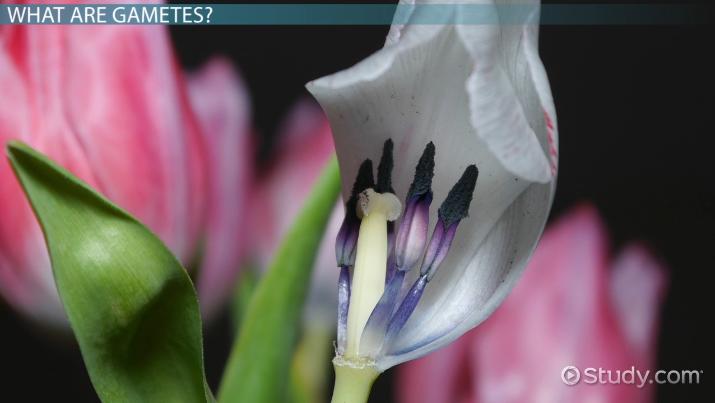 Try it now
Back
Coming up next: Pollen Tube: Growth, Function & Formation

Remember, meiosis is a type of cell division that specializes in making haploid, or half chromosome, sex cells. In plants, there are actually two meiotic divisions; this way, you get haploid cells from the male and haploid cells from the female, forming a diploid, or full chromosome set, for the new offspring. So, we see two meiotic divisions before the gamete is fully formed.

Which plant you're looking at determines what types of gametes form. In flowering plants, or angiosperms, you typically see the male gamete form inside the pollen grain located on the anther.

Those male gametes that form in the anther start off as just a bunch of large nucleus-containing cells. These cells go through meiotic divisions, forming what are called tetrads, or four haploid (half chromosome) bundles of gametes. These will become pollen grains. Obviously, the more grains there are, the more chances for reproduction we have.

Non-flowering plants will obviously not have flowers. In gymnosperms, for example, the pollen grains are not found in the anther like in flowering plants, but instead in a pollen cone or 'pine cone.' The pine cone will typically form the female gamete, while at the tip of the branch is the pollen cone, where the male gametes will come from.

'Less complex' plants, such as liverworts and mosses, don't have pollen grains as their more complex brethren do. They lack a seed or pollen, but they still carry sperm cells. At the tip of the moss, there's a tiny area called the antheridia. It's here that the sperm cells are produced and stored. They'll open when enough water soaks the moss, allowing the sperm to swim out and find an archegonia, which is the female portion of the plant that stores the egg cell.

Plants cannot reproduce like human beings, but they still produce two separate sex cells, a female (egg) and a male (sperm). These sex cells are called gametes and are produced through the process of meiosis.

In the case of simpler plants, such as moss, the sperm cells are produced near the top of the moss in the antheridia. When properly moistened, the sperm cells will release into the water, making their way to the egg cell structures. In angiosperms, or flowering plants, the male gametes form in the anther, encased in a pollen grain. These are then transported via insects, animals, or wind to other plants, where they will attach and fertilize an egg. In gymnosperms, such as pine trees, pollen grains form, but at the end of a branch, not on anthers.

What are Gametes? | Gamete Formation & Production

Pollen Grain Overview, Structure & Function | What is a Pollen Grain?

Epicotyl Overview & Function | What is Epicotyl?