A mantle plume is defined as a column of hot mantle rocks from the mantel-core that pass through the mantle to the base of the lithosphere. Learn the definition of a mantle plume, the evidence for mantle plumes, and why many geologists question their existence. Updated: 09/13/2021
Create an account

What Is a Mantle Plume?

A mantle plume is a large column of hot rock rising through the mantle. The heat from the plume causes rocks in the lower lithosphere to melt. The largest (and most persistent) mantle plumes are presumed to form where a large volume of mantle rock is heated at the core-mantle boundary, about 1,800 miles below the surface, although smaller plumes may originate elsewhere within the mantle. Once the temperature increases sufficiently to lower the rock density, a column of the hotter-than-normal rock (perhaps 2,000 kilometers in diameter) starts to rise very slowly through the surrounding mantle rocks.

Eventually, the rising column of hot rock reaches the base of the lithosphere, where it spreads out, forming a mushroom-shaped cap to the plume. The overlying lithosphere is pushed up and stretched out as the plume cap spreads. Heat transferred from the plume raises the temperature in the lower lithosphere to above melting point, and magma chambers form that feed volcanoes at the surface. This area is also known as a hot spot. Because the plume remains anchored at the core-mantle boundary, it does not shift position over time. So, as the lithospheric plate above it moves, a string of volcanoes (or other volcanic features) is created.

Sounds logical. But do they exist? 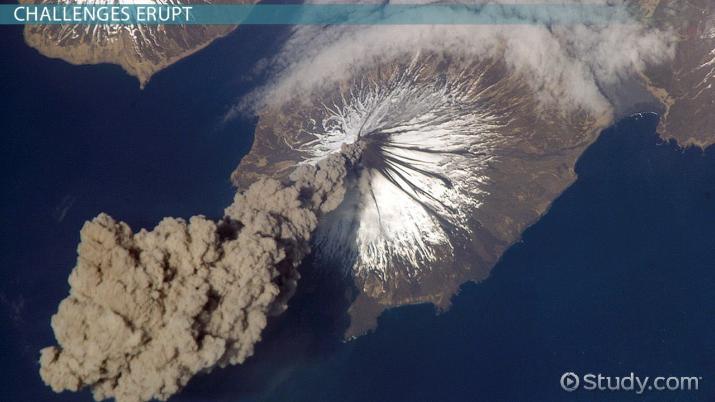 Try it now
Back
Coming up next: Mid-Atlantic Ridge: Definition & Explanation

The evidence for mantle plumes is largely circumstantial (if not downright speculative).

The model was originally proposed in the late 1960s as an explanation for the Hawaiian-Emperor seamount chain, a 3,600-mile long string of volcanoes (only the southeastern-most of which are active) smack-dab in the middle of the Pacific Plate. Most active volcanoes are found at plate boundaries: either subduction zones (such as the Aleutian Islands) or divergent boundaries (like Iceland), where melting of the lithosphere is readily explained by plate tectonics. But, the Hawaiian Islands are nowhere near any plate boundary, so something else had to be creating melting conditions there. Thus, mantle plumes were proposed as the answer for how melting happened beneath the middle of a tectonic plate and persisted in one spot for tens of millions of years.

Once the idea of mantle plumes had taken hold, they were suggested as the explanation for another puzzling type of volcanism.

More than 20 times in the geologic past, there have been eruptions of thousands of cubic kilometers of basalt lava from large rifts (cracks) in the continents. These events, and the thick layers of basalt thus formed, are known as flood basalts. Today, these places are marked by large, flat-surfaced plateaus built up from thousands of feet of basalt lava flows. Notable flood basalts include the Columbia Plateau (Washington and Oregon), the Deccan Plateau (India), the Siberian Traps (Russia), and the Karoo (South Africa).

For the most part, the eruptions are thought to be too massive to be caused by normal plate subduction, or they occurred in places where no subduction zone was active at the time. The quantity of magma necessary to yield the lava flows was extreme and required melting of large volumes of mantle rocks. So, melting within a plume's mushroom-shaped top was proposed to explain the large quantities of basalt lava. But so far, no direct connection has been made.

Yellowstone National Park is located within a huge volcanic crater that has periodically erupted. In fact, the park's crater is at the Northeast end of a chain of volcanic craters that have formed over the past 17 million years or so. Some geologists think a mantle plume is the explanation. Others are not so sure.

The truth of the matter is that other than the fact that it makes logical sense, there is little physical evidence to support the plume model hypothesis. Despite that, it has remained the accepted explanation for so-called intraplate (middle of a plate) volcanic activity for almost 50 years!

Recently, a few geologists have begun to point out that the hypothesis is not supported by actual observations and measurements. For example, there are differences between the temperatures and rock densities measured in the mantle and those predicted by the model. The doming of the lithosphere that should result from the upward push of a plume appears not to exist in some places where mantle plumes are proposed.

Originally, plumes were thought to be absolutely stationary. Recent research suggests that they in fact move very slowly relative to one another, just not at the same speed as the overlying plates do. The proposed shape of the plumes, exactly where they originate, and how and where melting is happening within them are also questioned based on lack of convincing evidence.

The mantle plume hypothesis is experiencing its first serious critiques since being proposed. But, that is the way science is supposed to work, and if the doubters can amass enough observational evidence about the mantle and lithosphere that is contrary to what the mantle plume model predicts should be happening, it will either be modified or discarded. Still, for now, mantle plumes remain the consensus explanation for volcanic activity far from tectonic plate boundaries.

Let's review. Mantle plumes are hypothesized columns of hot mantle rocks that rise through the mantle from the mantle-core boundary to the base of the lithosphere. The lower lithosphere rocks are heated by the plumes and melt to form hot spots. Geologic events that have been attributed to mantle plumes include volcanic island chains and flood basalts. Although many geologists now question whether mantle plumes really exist, they remain the accepted explanation for volcanism not associated with a subduction zone.