After watching this video, you will be able to describe the most important physical and human characteristics of Russia and Central Asia and place them on a map.
Create an account

Russia is pretty well known in Western countries. Central Asia, not so much. If you ask someone, 'Where is Central Asia?', many people won't be able to answer. The center of Asia, it would seem when you look at a map, is pretty much just the west part of China and the surrounding Himalayas. But we do have a standard definition of Central Asia, which is five countries: Uzbekistan, Turkmenistan, Tajikistan, Kyrgyzstan, and Kazakhstan. If you look at this area, you might think, 'That should be called West Asia.' But nope, it's Central Asia, home to over 200 million people.

Humans have been in Central Asia for tens of thousands of years, and so it shouldn't be surprising that they've left a lot of things behind. Those things are human characteristics, which are anything that impacts the surface of the earth that is caused directly by humans. Examples include roads, cities, power lines, railway tracks, canals, and dams. Some dams are natural, and we'll learn about both man-made and natural dams later in the lesson.

Geography is concerned with the earth and everything on its surface. And it's pretty clear that humans have had more impact on the landscape of the earth than anything else. We've built incredible cities, changed the path of water across the earth, pushed species of animals and plants to extinction, created gigantic explosions, and built millions of miles of tunnels. So, let's talk about that most grand of human endeavors: cities. 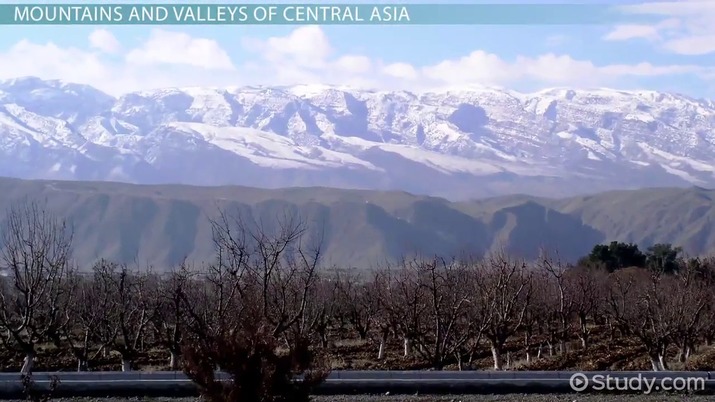 Coming up next: Major Landforms of Russia & Central Asia

The cities of Russia and Central Asia are not as large as in other places. This is a fairly sparsely populated part of the world, with only a few truly huge ones. The biggest by far is Moscow, over here in Russia, at 12 million people as of 2013, followed by St. Petersburg, which has 5 million people. You then have to go all the way down to 2.2 million people in Tashkent, the biggest city in Uzbekistan, though that number is an estimate from 2009.

Information about this part of the world can be patchy sometimes. Nevertheless, there are still a lot of cities in Central Asia and Russia, even if those cities are modest in size. Much of the rest of the population is in the countryside. Agriculture is a big deal in many of these places, and most of the land in Central Asia has been adapted by humans for that purpose.

Dams and a Man-Made Desert

A more dramatic and interesting human characteristic of Central Asia is Aralkum, a man-made desert on what used to be the bed of the Aral Sea. In 1960, the Aral Sea was the 4th largest lake in the world, a tenth of the size of California. Now, thanks to water moved for irrigation, mostly by the old Soviet Union, the lake has almost completely dried up. The area that was once the Aral Sea is now called Aralkum. This shows the huge power humans have to affect the earth's landscape.

Mountains and Valleys of Central Asia

While Russia and Central Asia might not be the most dramatic landscapes in the world, there are no shortages of mountains and valleys. Central Asia is on the Western side of the Himalayan Mountains, though many of the biggest mountains are in other parts of Asia. The tallest mountain of Central Asia is Jenish Peak in Kyrgyzstan at 24,406 feet. Also significant is the Kopet Dag range, which lies on the border between Turkmenistan and Iran.

Being quite a dry part of the world, Central Asia has its fair share of dusty canyons and valleys. The Fergana Valley is a place that is unusually fertile compared to the dry, dusty land that surrounds it, making it super important for agriculture. Much of these nutrients are supplied by the Naryn and Kara Darya Rivers at the bottom. This huge, 186-mile-long valley spans over three countries: Uzbekistan, Tajikistan, and Kyrgyzstan.

Have you ever visited the Grand Canyon in Arizona? It's pretty impressive. But did you know that Central Asia has its own Grand Canyon? It's called the Sharyn Canyon and is 96 miles long, and up to 980 feet deep. It's located here, in Kazakhstan.

And then there's Russia. Russia has landforms a plenty all on its own: that could be a topic of an entirely separate video. But in terms of valleys, most famous is the Valley of Geysers, which has the second largest density of geysers in the world, after only Yellowstone National Park. The tallest mountain in Russia is Mount Elbrus, though this is in the far west of Russia, near Europe. The West has many mountains, including the Caucasus in the Southwest.

Lakes and Deserts of Central Asia

The most important feature of Central Asia is probably lakes. This is made all the more important by the fact that there is so much desert in the area. We already mentioned the now practically non-existent Aral Sea. But there's one lake that is hard to imagine ever drying up: the Caspian Sea, which remains the largest lake in the world. It has a total of 143,200 square miles in size and reaches up to about 3,360 feet in depth. It also borders on three of the countries we're looking at today: Turkmenistan, Kazakhstan, and Russia. The Caspian Sea contains freshwater in some parts and seawater in others, making it an important location for biological diversity.

The desert that now lies where the Aral Sea was might be man-made, but there are also huge natural deserts in Central Asia. The largest is called the Kyzyl Kum, meaning 'red sand,' and is found in Uzbekistan. It's the 11th largest desert in the world.

Central Asia and Russia contains a total of six countries: Kazakhstan, Kyrgyzstan, Tajikistan, Turkmenistan, Uzbekistan, and Russia. Physical characteristics are natural features of the earth's surface, like valleys, mountains, rivers, lakes, and coastlines. And human characteristics are human features of the earth's surface, like cities, roads, dams, and canals.

The cities of Russia and Central Asia are not as large as in other parts of the world since most people are farmers living in the country. The biggest are Moscow and St. Petersburg in Russia, followed by Tashkent in Uzbekistan.

Another major human characteristic of Central Asia is the desert of Aralkum. The Aral Sea was once the 4th largest lake in the world, but has now mostly dried up thanks to human activities and is a desert.

Other notable physical features of Central Asia are the Fergana Valley, which is a fertile valley; the Sharyn Canyon, which is called the Grand Canyon of Central Asia; and the Valley of Geysers in Russia, which has the second largest density of geysers in the world.

Economic Opportunities for Minorities & Women in Africa & the Middle East

Impact of Resources on the Movement of Products, Capital & People in Russia & Central Asia

Mapping the Physical & Human Characteristics of Australia & the Pacific Islands

Mapping the Physical and Human Characteristics of the United States