'Woman in the Nineteenth Century' was a pivotal book by feminist writer Margaret Fuller. Look into a brief summary of the book and explore Fuller's early life, works, and influence in the aftermath of its publication. Updated: 12/23/2021
Create an account

Drawing on transcendentalist philosophy, Woman in the Nineteenth Century makes an argument for a marriage of equals as the most pure and spiritually fulfilling form of marriage. She makes the then-radical claim that men are not purely masculine, nor women purely feminine. 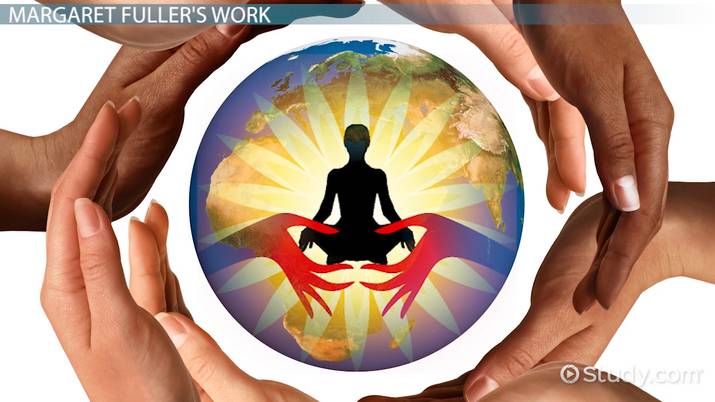 Coming up next: Margaret Fuller's The Great Lawsuit: Summary & Analysis

Margaret Fuller was born in Cambridge, Massachusetts, in 1810. The daughter of a well-to-do family, she was given a substantial private education by her father, Timothy. After completing her formal education in her teens, Fuller realized she was not like most other women of her time, as she desired a career over marriage.

Fuller began working as a teacher at Green Street School and private tutor, while also earning a living as a journalist, book reviewer, and translator. By the time she was 30, she had developed a reputation as the best-read person in New England, male or female. She made connections with heavyweights of the literary scene there, including Ralph Waldo Emerson and Frederic Henry Hedge.

Let's first look at her work as editor of The Dial. In 1839, Emerson asked Fuller to become the editor of his journal The Dial. The Dial was dedicated to transcendentalism, the philosophical and literary movement that Emerson and others had begun formulating in the 1820s and 1830s. Drawing on Eastern religious traditions, transcendentalism championed individualism over social conformity and encouraged self-reliance as a way to intellectual and spiritual fulfillment. Fuller published a series of essays titled ''The Great Lawsuit'' in The Dial, which were collected and published as Woman in the Nineteenth Century in 1845.

Now let's take a look at Women in the Nineteenth Century itself. Woman in the Nineteenth Century draws heavily on transcendentalism, as well as earlier feminist writers, such as Mary Wollstonecraft, to argue for women's equality to men. The basis of Fuller's argument is that mankind is being held back from spiritual enlightenment through its refusal to accept divine love. Divine love, in Fuller's formulation, depends on equality of the sexes. Only when women achieve fulfillment of their potential, Fuller argues, will mankind as a whole reach fulfillment.

Let's now finally take a look at thoughts on marriage. Fuller's book outlines four different types of marriage. The first is based purely on need and convenience, the second on mutual idolatry of the other. Next is intellectual companionship. Finally, there is the spiritual marriage, which encompasses the previous three and in which the man and woman are equal spiritual partners.

Fuller argues that the souls of men and women are fundamentally the same. This leads to perhaps her most famous and controversial argument: ''There is no wholly masculine man, no purely feminine woman.'' This argument that all people, male and female, contain elements of masculinity and femininity was revolutionary at the time and has been highly influential on feminist thought.

Drawing again on transcendentalism, Fuller concludes that all people, men and women, need to be independent and self-reliant. Fuller holds that only after each individual is self-reliant can a true marriage of equals occur.

Today, Woman in the Nineteenth Century is considered the foundational work of American feminism. Three years after its publication, the Seneca Falls Convention led to the beginning of the suffragette movement, which advocated for women's equality and the right to vote.

These first-generation American feminists were highly influenced by Fuller, especially her ideas about equality in marriage and her relating women's rights to other movements, such as abolition. Similarly, Fuller's ideas on masculinity and femininity influenced the second-wave feminists of the 20th century.

First, we learned that Margaret Fuller was one of the most important female writers and thinkers of the 19th century. Specifically, Fuller's Woman in the Nineteenth Century, originally published in Ralph Waldo Emerson's magazine, The Dial, is considered the first major feminist text in America and has inspired feminist movements ever since its first publication as a book in 1845.

Drawing on ideas derived from transcendentalism, which was the philosophical and literary movement that Emerson and others had begun formulating in the 1820s and 1830s, Fuller argued that mankind's path to enlightenment depended on the equality of women. She analyzed different types of marriages and argued that a spiritual marriage, in which man and woman are equal spiritual partners, is the highest form of marriage, leading to divine love, depended on equality of the sexes.

She also argued that all people contain elements of masculinity and femininity and that people, both male and female, must become independent and self-reliant before entering into a marriage. Her arguments and writings helped pave the way for the suffragette movement, which advocated for women's equality and the right to vote and, in turn, helped kickstart the fight for women's rights during the 20th century.

Sociology for the South, or the Failure of Free Society: Summary & Analysis

A Model of Christian Charity by John Winthrop | Summary & Analysis

The Author to Her Book by Anne Bradstreet | Summary & Analysis