The marginal propensity to consumer (MPC) contributes to an observed multiplier effect, whereby the increase in a producer's ability to produce goods and services leads to further consumption. Explore the definitions and calculations of the MPC and multiplier effect. Updated: 12/15/2021
Create an account

We all would love the opportunity to receive extra money on our paychecks. But what would you do with that extra money? Would you buy new clothes? Would you go to a concert? Or perhaps you would buy the newest cell phone that was just released. While most of us have some sort of routine of what we pay each month with our paychecks, in the event that we do receive extra income, we must make a decision of what to do with that money. 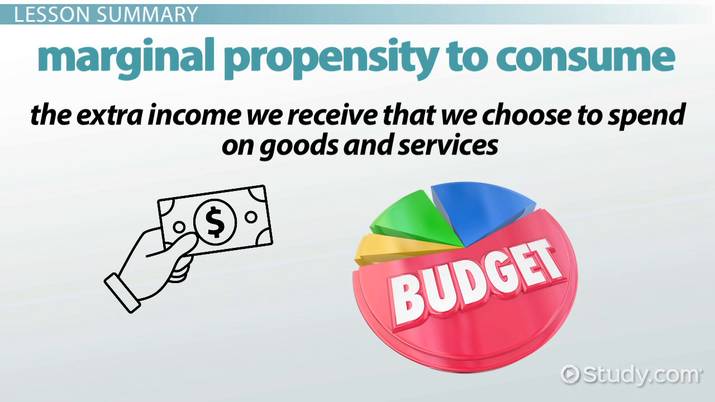 Coming up next: Real Output, Price Level and the Real Gross Domestic Product

Now that we know what marginal propensity to consume is, let's apply it to an example so that we can see how it's actually calculated.

Let's imagine that you receive a $600 bonus on your paycheck. After discussing it with your family, you decide to purchase a new couch in the amount of $400. This means you decide to consume $400 of your extra income. The remaining $200 is placed in a savings account. When we plug those numbers into an equation, we get the following:

Thus, 66% of the extra income was used for consumption.

Another important piece of the marginal propensity to consume is the multiplier effect. The multiplier effect is the term used when the final income increases due to additional spending. In basic terms, we can think of our economy's flow as a circle. When we spend money on goods and services, we inject it into the flow of the economy. This money then goes to the producer of those goods and services so that they can achieve an income and so that they can produce the goods and services we demand and want to purchase. When they produce the goods, they add them to the flow, and when we purchase them, we also add money back to the flow.

So, when we receive extra income on our check, the portion we spend is referred to as the marginal propensity to consume. The amount of the marginal propensity to consume, therefore, contributes to the multiplier effect because extra income leads to extra demands and/or spending and creates more income. This increase in income because of the new injection, or spending, is the multiplier effect.

Okay, let's now learn how to calculate the multiplier effect. Here's the formula we use:

If we take our previous example, we know that the MPC is 66%.

Therefore, the multiplier effect is 2.9, which means that for every $1 of new income, it generates $2.90 of extra income in the economy at large.

Marginal propensity to consume is the extra income we receive that we choose to spend on goods and services. When we consume goods and services, we are adding money to the flow of the economy. This money is paid to producers that make the goods and provide the services. They then use that money as income and as a means to produce the goods and services in order to offer them for consumers to purchase. The marginal propensity to consume is the extra money we spend, ultimately creating an increase in demand and spending. The consequence of the extra spending and producing is an overall increase in income, which is called the multiplier effect.

Money as a Unit of Account | Definition, Examples & Function

Gross Domestic Product Factors & Activities | What is Included in GDP?