Definition of the Marine West Coast

The marine west coast climate is a biome characteristic of being located mid-way between the tropics and arctic or antarctic regions of the world, most often between 35 and 60 degrees north. This climate's major characteristics are mild summers and winters and abundant annual precipitation. This ecosystem is highly influenced by its proximity to the coast and to mountains. It is sometimes known as the humid west coast climate or the oceanic climate. In additional to coastal plains and mountains, this type of climate is often characterized by glacial valleys and fjords.

Marine west coast climates are typically found to the west of large mountain ranges that cause fronts to collide and release all of their precipitation. Wet warm air from the coast rises and cools as it goes over the mountain. This causes the water in the air to cool and condense, resulting in rain, drizzle, and fog. Then drier air proceeds inland. This is known as the rainshadow effect, which in basic terms is when a mountain blocks the advance of wet weather, creating a dry biome on the other side and a wet biome on the ocean side. This results in a very special climate. 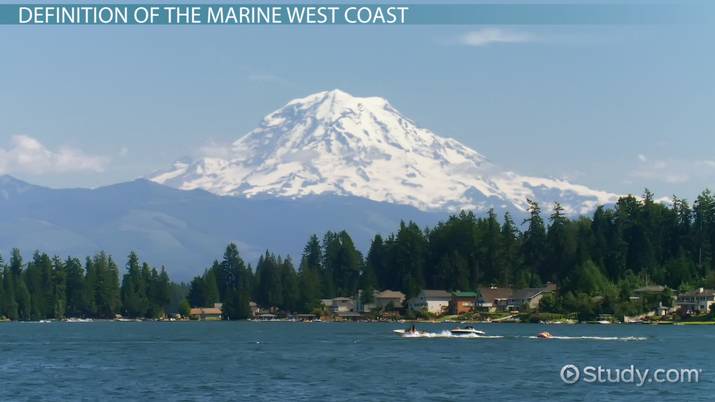 The temperature of marine west coast ecosystems is very mild and does not fluctuate greatly. There are only two seasons, summer and winter. The average low is 30 degrees Fahrenheit in winter months and can reach 72 degrees F in summer months. This region is known for its wet, humid air. This region is so humid because it can receive 30-98 inches of rain in a year. Think of Portland, Oregon: it's known for being wet and generally very mild. However, it can get rain 150 of 365 days a year, common in marine west coast climates.

Within marine west coast climates, you can find temperate rainforests, cooler boreal forests, and even alpine forests. Plants that require a lot of water are generally present in the marine west coast. In temperate rainforests (named so because of the large amounts of rain they receive), thick forests can thrive. These forests are home to numerous types of evergreen trees (those that keep their needles) such as pine, spruce, cedar, and redwoods. Redwoods are the trees that California is known for, the trees that grow so large that multiple people need to link arms in order to hug them. Marine west coast ecosystems also have mosses growing, many flowers such as roses, and a variety of grasses to allow animals to survive.

The marine west coast climate is a biome characteristic of being located mid-way between the tropics and arctic or antarctic regions of the world. It is typically located on the west coasts of land masses that have an associated mountain range to ensure rainshadow effects that impact the climate of the ecosystem. In simple terms, it's when a mountain blocks the advance of wet weather, creating a dry biome on the other side and a wet biome on the ocean side.This ecosystem is known to have very mild temperatures that average 30 degrees F in colder months to 72 degrees F in the warm months, and there are only two main seasons. This ecosystem also experiences large amounts of precipitation - usually between 30 and 98 inches. These characteristics support dense forests (mostly temperate rainforests and redwood forests), mosses, grass, wildflowers, and many animals. The air is typically very humid. The marine west coast climate is very special to the earth.

Europe Climate Zones & Classifications | What Is the Climate In Europe?

The Polar Front Theory of Cyclogenesis