Nike is one of the most popular global brands and its success has a lot to do with its global marketing strategies. Learn about Nike's marketing strategies, including emotional advertising, the NikeID initiative, strong sponsorships, and onboarding technology. Updated: 01/06/2022
Create an account

The title of this lesson alone probably brings to mind images of advertisements and products by the owner of that slogan: Nike, one of the world's most popular and recognizable brands.

Not only is Nike successful at marketing their products in the United States, but they have grown into a truly international company through their approach to global marketing strategies. Global marketing strategy, according to Oxford University Press, is 'marketing on a worldwide scale' taking note of differences, similarities, and opportunities in order to meet global objectives. Or, simply put, it's creating a strategy that fits the market you're trying to reach, incorporating the geographic, cultural, and societal norms of that region. What works for one market may not work for another. Global marketing helps create a strategy for a similar product in a different market.

Nike's business and marketing strategy, both at home and abroad, help keep them at the forefront of their industry of footwear and athletic apparel. Nike succeeds in global marketing because they understand world markets and how to reach each audience in a personalized approach that works for different languages, cultures, customs, needs, and differences.

Nike is one of the most successful companies on the globe, both from a sales standpoint and in their marketing initiatives. Here are a few of the ways Nike achieves success in reaching varied audiences with the right message. 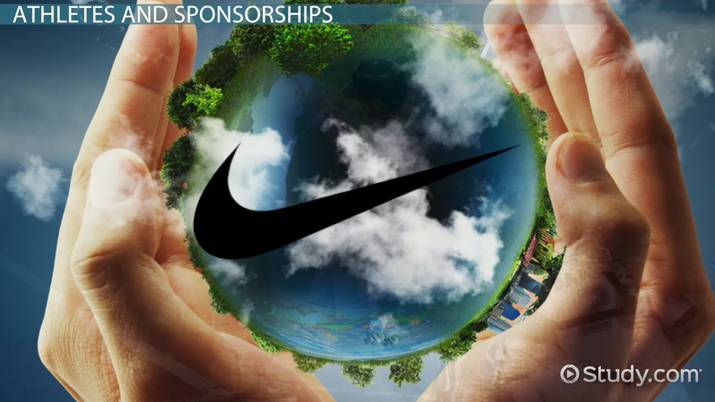 Coming up next: What Is Globalization of Business? - Definition, Impact & Effects

From its beginnings with the now world-recognized slogan, 'Just do it,' Nike has succeeded in marketing across borders through the use of emotional advertising and branding. Rather than selling a product directly, Nike has managed to build a strategy that appeals to a customer's aspirations or emotions to build an attachment to a brand, as opposed to selling the product solely for the product's sake.

Nike routinely relies on the emotions of activity, heroism, success, achievement, and triumph to appeal to customers, a strategy that has been successful regardless of the market. Some of Nike's emotional branding tactics have included advertisements with phrasing like, 'Anticipate greatness' or 'Your only limit is you.'

Appealing to basic human emotion and desire knows no boundary. It's a strategy that works as well in Europe or Asia as it does in the United States.

One of Nike's most successful strategies that has eclipsed the boundaries of country and culture is the introduction of NikeID, which allows shoppers to customize products that align with their own styles and cultural preferences. For example, a consumer can choose different colors, color combinations, patterns, and shoelaces as well as being able to customize a shoe for favorite regional sports. Though Nike offers a full complement of athletic shoes ready to buy off of store shelves, they recognized that consumers have individual tastes and preferences, particularly consumers in other countries with varying cultural and societal differences.

Nike has built much of its marketing and advertising with the help of superstar athletes and sports sponsorships. By selecting international sponsorships and highlighting international athletes, the company has been able to build a broader, global interest in their brand and put their name and logo at the forefront of global sporting events.

For example, Nike has partnered with the English football club Manchester United to not only penetrate the European market but also reach consumers from all markets who are interested in soccer, known outside of the United States as 'football.' Sponsoring an athletic team or an event such as World Cup soccer, or using an internationally recognized superstar like Cristiano Ronaldo or Rory McIlroy, has helped Nike gain traction in other countries where different sports and athletes take center stage.

There's no doubt we live in an increasingly technological world, and Nike has excelled at reaching various audiences with a culturally appropriate message. In particular, Nike uses individualized and customized social media channels to support various sports that are popular in a particular country. For example, Nike hosts a dedicated social media account for fans and athletes of the sport of cricket and also uses appropriate languages and dialects in not only their products, such as a shirt that says 'Espana' on it, but on their websites and other online platforms. For example, Nike has a website that displays entirely in Spanish.

It's hard to find much fault with Nike's global marketing strategies because they do most everything well. However, there have been a few instances of marketing failures at Nike. In 2011, Nike embarked on another superstar partnership with double amputee and runner Oscar Pistorius, pouring millions into global marketing campaigns and advertisements featuring the athlete in starting blocks with the phrase 'I am the bullet in the chamber.' Shortly after the ad ran, Pistorius was charged in the murder of his girlfriend, Reeva Steenkamp, and Nike was forced to suspend all ads and their relationship with the fallen athlete. It cost the company millions of dollars. Partnering with the wrong superstar, even one that's viewed as slightly controversial or provocative, can be a marketing fail no company wants.

Additionally, not having a solid grasp of cultural preferences and expectations can impede marketing efforts. Take, for example, Nike's push to encourage more people in China to take up running and jogging. These have not traditionally been popular activities in that culture, and health clubs and gyms are viewed as activities for only the wealthy. The activity of running is generally only introduced in a school setting in the form of forced physical education classes. It's typically not a leisure activity, either, as many of China's population centers are heavily polluted.

Global marketing strategy is a way of selling a product or service to an international audience, while taking into account cultural and societal norms and preferences. Nike has succeeded over the years in presenting its products in a way that resonates with an audience no matter where they're located. Some of Nike's best tactics include emotional marketing, NikeID, incorporating technology and building relationships with global sports teams and athletes. While Nike's marketing failures have been minimal, aligning with the wrong athlete or not understanding local customs can create a divide in messaging.

How to Create a Marketing Mix for Individual Cultures & Countries

Choosing the Location for a Business

Brand Equity in Marketing: Overview & Examples | What is Brand Equity?