The ways in which people got information changed dramatically during the 1950s. While no technology would be completely doomed, this lesson shows how the seeds were planted for a revolution in media in the decades to come.
Create an account

Beginning of the End of Newsreels

The 1950s were a time of great change for mass media, with developments in technology drastically changing the media landscape. Radios continued to work their way into new places in American life, while changes to the book and newspaper industries meant that publishing saw a renaissance of sorts. Most drastic was the introduction of the television. However, TV meant that another technology would soon be doomed. For decades, the most common form of mass media across much of the world was the newsreel. For a few cents, someone could walk into a theater and catch the headlines of the day, much like watching a few minutes of a major cable news network. However, by the 1950s, the newsreel was starting to face resistance from new forms of media. For its whole existence, the major advantage of the newsreel was that it could show people through video what was happening halfway around the world. As we will soon see, this was becoming less and less of an advantage during the 1950s. 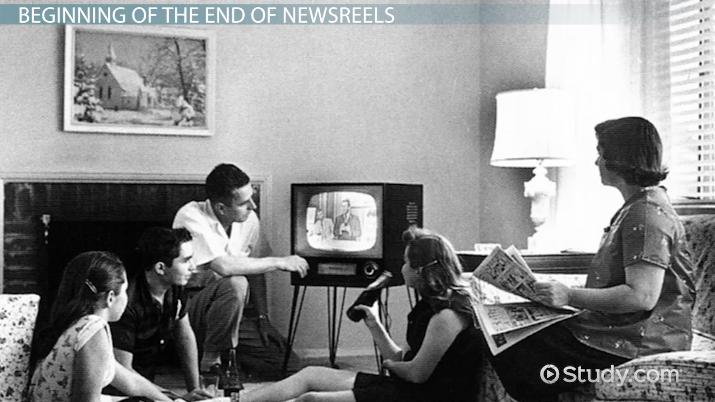 Radio, on the other hand, was still doing quite well in light of the changes of the 1950s. In fact, the whole world of radio was about to explode onto a completely different set of frequencies. Prior to the 1950s, just about every radio broadcast was on the AM spectrum. FM broadcasts were not possible until 1939, and due to World War II, they were largely ignored until the 1950s. However, AM broadcasters were eager to limit the accessibility of the new FM frequency because it would mean that they would have many more competing stations. Because they were fewer in number and limited to certain bandwidths of transmission, there was a serious reduction in 'interference.' Interference between stations had long weakened AM signals, meaning that when offered the choice of AM or FM on new radios, many consumers found FM stations to be more appealing.

While radio and newsreels were relatively new technologies, one of the oldest forms of media in use would also have pretty significant changes. Books had long been published as either expensive hardcover volumes or, more recently, cheaper paperback editions that were not very durable. However, with new materials for book covers available during the 1950s, that began to change, and cardboard became increasingly common. This meant that books that were not economical to be published as paperbacks could now be affordably made into hardcover editions. Books also were bound together in different ways. Prior to the 1950s, books were stitched together, with threads or wires holding pages in place. By the end of the 1950s, many books were instead glued together, resulting in much faster manufacturing times and much lower costs.

Newspapers also went through a bit of a revolution, although it wasn't so much a change in technology as it was a change in business practice. The events of World War II had shown media outlets the importance of maintaining bureaus around the world. However, few newspapers had the funds to maintain writers everywhere. This had previously led to a rise in the Associated Press, an organization that allowed local news outlets to share their findings with member papers elsewhere. Yet, the AP heavily limited opportunities to share with journalists outside of the AP, leading to a rise in competitor organizations. By the end of the 1950s, United Press International (UPI) had emerged through mergers with other bureaus as a real competitor with the Associated Press, offering new perspectives to a global readership.

However, no media benefited more from the 1950s than television. Largely a curiosity before World War II, the consumer goods boom that came with the 1950s had meant that millions of televisions were being sold. While most of these were black and white models, color TV became possible during the 1950s as well. While the fact that TV sales were booming was good for manufacturers, it was even more advantageous for the producers who created the programming carried by the major networks. TV was still largely dominated by ABC, NBC, and CBS in the United States, but was truly coming into its own as a form of media. One of the most famous examples of this during the 1950s was the coverage of the McCarthy hearings, in which millions of people watched Senator Joseph McCarthy accuse other government officials of contact with the Communist Party.

Mass media changed greatly during the 1950s. For AM radio and the newsreel, changes would prove difficult to overcome. Conversely, newspapers and book publishers were able to use the changes, whether technological or organizational, to their advantage in order to offer a better good to their consumers, and thus increase their own profits. However, The most profitable enterprises of the media world in the 1950s were offered by FM radio and especially television. While neither media would truly come into its own until the next decade, both experienced very high adoption and growth rates during the 1950s.

Keep these goals in mind while studying the lesson above:

Mass Media in the U.S. in the 1950s
Related Study Materials

Why Is Fahrenheit 451 Banned?