Amy holds a Master of Science. She has taught science at the high school and college levels.

You have previously learned about mole ratios and how to make mole to mole calculations from balanced chemical equations. This lesson will teach you how to relate the mole ratio to the amounts of substances in grams. For either reactants or products, you will learn how to determine mass when given moles, moles when given mass and mass when given mass.

The main equation is: moles A x (mole ratio of B/A) x molar mass of B = mass of B. The way you would use this in an actual problem is the following. You are asked how many grams of glucose are produced when 3 moles of water react with carbon dioxide. Start with your balanced equation: 6 CO2 + 6 H2 O → C6 H12 O6 + 6 O2.

You have learned previously how to determine the amount of grams in one mole of a substance. For this problem, I will just tell you it is 180g glucose per 1 mole glucose. Now you have all three pieces of data you need to figure out the solution. 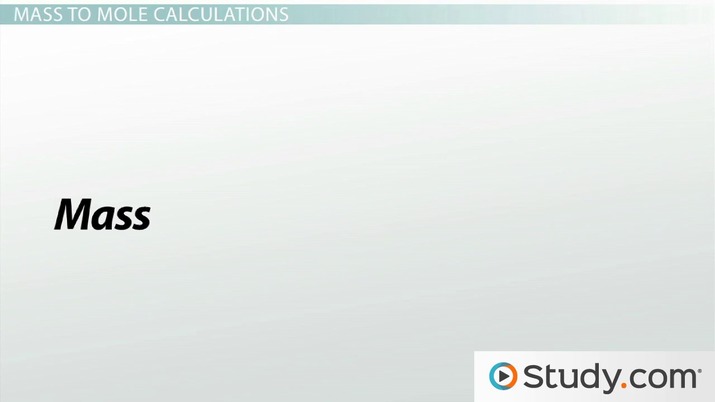 Coming up next: Stoichiometry: Calculating Relative Quantities in a Gas or Solution

Let's try another example, this time converting mass to moles. The conversions you need to make are:

In this example, the SO2 represents A and the CS2 represents B. Instead of you having to figure out the grams of SO2 in one mole, I will tell you that it is 64.1g SO2 %/1 mole SO2 .

Set up the equation:

Let's do one last type of calculation, mass to mass. The conversions you need to make are:

For any equation, you can calculate moles to moles, moles to mass, mass to moles and mass to mass by using simple equations and mole ratios. Use the following simple conversions:

You could be able to calculate moles to moles, moles to mass, mass to moles and mass to mass, using equations and ratios, after watching this lesson.

Corrosion Overview & Prevention | What is Corrosion?