The Massachusetts Bay Colony was established by a group that envisioned building a model religious community. Discover who these people were, their religion, the history of their community, and their economic life. Updated: 09/01/2021
Create an account

The Massachusetts Bay Colony was founded by the Puritans, a religious minority group who migrated to the New World seeking to create a model religious community. The Puritans believed that the Anglican Church needed to be purified of the influences of Catholicism. The Puritans were opposed by both the established Anglican Church and the Stuarts, the ruling monarchs of England, and they became quite unpopular in England.

The Puritans were led by a one-time lawyer named John Winthrop, who became one of the most powerful religious leaders in the colony. Winthrop wrote that the Massachusetts Bay Colony must become a 'city on a hill,' an example of a perfect religious community. 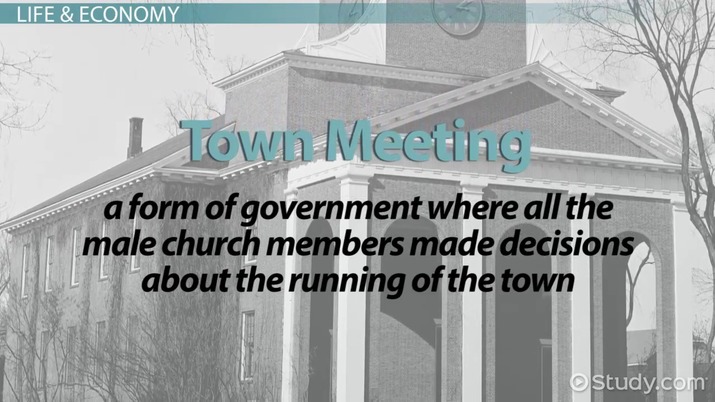 Coming up next: 1795 Treaty of Greenville: Definition & Summary

Forming the 'City on a Hill'

As more and more Puritans poured into the Massachusetts Bay Colony, they began to form towns and communities. Puritans farmed in the fields surrounding their towns and grew a variety of different crops. This variety of crops, as well as the pure drinking water and cool climate of New England, stopped the spread of diseases that were common in other colonies of the time.

The Puritans lived into their 70s or 80s and were among the first groups of people who lived long enough to see their grandchildren. In addition, the variety of different crops helped the Puritans to become economically successful. In the event that one crop failed, Puritan farmers still had other crops to sell or to feed to their families.

Each Puritan town had its own church and town meeting, a form of government where all the male church members made decisions about the running of the town. This form of government continues to be used in small New England towns today, with the change that in modern town meetings all voters can participate in the decision-making process for their town.

According to the charter of the Massachusetts Bay Company, any town of at least 15 people had to open an elementary school supported by local taxes. This policy ensured that, by the 1660s, a majority of New England men could read and write. The same literacy rates were not achieved in the Chesapeake colonies until the 18th century. Although Puritan women were not as well educated as Puritan men, many families sent their daughters to school with their sons.

The Puritans believed that God had formed a special covenant with them and expected them to live according to their religious texts. The Puritans also wanted to set a good example for those that had resisted change back in England so they might persuade them to change their sinful ways.

Puritan churches were organized in a congregational pattern, where each church was independent and elected its own ministers. Church attendance in Puritan towns was mandatory; however, in order to be considered a full church member, Puritans had to prove they had experienced a religious conversion and show that they were part of the predestined elect, a group that was assured entrance into heaven.

The tie between the town meeting government system and the rigorous process to become a church member eventually led to problems in the colony. Although the first generation of Puritan migrants were deeply involved in the church, their children and grandchildren became increasingly less likely to become full church members and, thus, less likely to participate in the town meeting system. The Halfway Covenant of 1662 attempted to solve this problem by allowing any grandchildren of a full church member to become members regardless of the status of their parents.

Once this lesson on the Massachusetts Bay Colony concludes, you could attempt to:

The Effects of the Nuclear Arms Race on Cold War Politics

Facts About the Middle Colonies: Lesson for Kids