Beginning of a Massive Star

Any star which is larger than eight solar masses during its regular main sequence lifetime is considered a massive star. They typically have a quick main sequence phase, a short red supergiant phase, and a spectacular death via a supernova explosion.

Massive stars are born, just like average stars, out of clouds of dust called nebulae. When a nebula collects enough mass, it begins to collapse under its own gravity. The internal pressure created by this collapse is enough to trigger fusion of hydrogen deep in its core. When nuclear fusion begins, a star is born. If the cloud of dust is large, it will create a massive star. A star is considered massive if it is at least eight times more massive than our Sun! 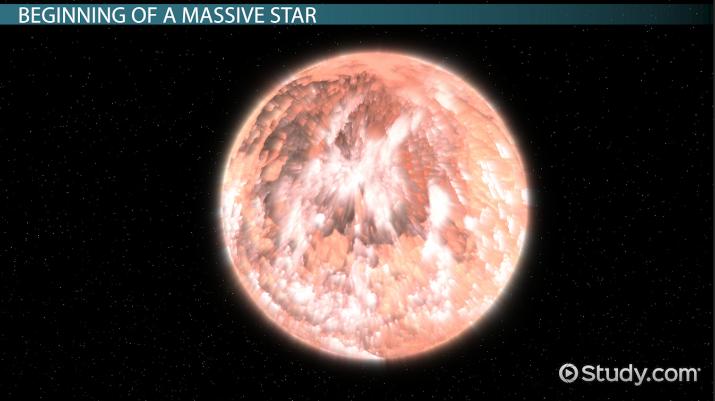 In all stars, hydrogen continues to be fused into helium during a stable portion of the star's life cycle called the main sequence. During this time, there is a balance between the gravitational inward forces and the core nuclear fusion outward forces. Until the hydrogen in the core is exhausted, the star will exist quite stably (although it probably would not make a good vacation spot).

The temperature, luminosity, and amount of time that it takes a star to expend its hydrogen are dependent upon its mass. A massive star will burn at an extremely high temperature; it will be beautifully luminous, but its hydrogen will only last for millions of years. This may seem like a long time, but it is like a blink of the eye in comparison to smaller stars that will exist for billions of years.

When a massive star has expended all of its core hydrogen, this means that the gravitational forces pushing inward will overcome the fusion forces which had been pushing outward. The outer layers of the star will then compact inwards. In massive stars, the increased pressure in the contracting star can cause the latent hydrogen in the shell of the star and the helium in the core to begin fusing.

During the red supergiant phase, the largest stars in the universe fuse many heavier elements in addition to helium, such as carbon, neon, and silicon. In fact, these giant stars are necessary to provide the heavy elements, which are essential for the formation of galaxies.

The final stage of a red supergiant is the fusion of silicon into iron. This is because iron cannot fuse without additional energy. Therefore, when iron accumulates in the core of a star, nuclear fusion will be unable to continue. As the star compacts under its own gravity, it will trigger a massive supernova explosion. Afterward, the final bits of the once-gigantic star will become either a neutron star or a black hole.

A massive star is a star that is larger than eight solar masses during its regular main sequence lifetime. Massive stars are born, just like average stars, out of clouds of dust called nebulae. These stars have:

Sufficient study of this lesson could result in your ability to:

What are Neutron Stars and Supernova Remnants?

What Are Planetary Nebulae?

Supergiant Star Overview & Classification | What is a Supergiant?

Determining the Temperature of a Star

What Are the Different Types of Galaxy Clusters?