Evolution and species-survival depend on reproduction, which is facilitated by humans as it is in all species. The process discussed in this lesson is focused on mate selection, courtship, marriage, and childbearing. While these are steps in a studied process across cultures over time, this process is not absolute and does not apply to all individuals' choices in starting a family or choosing to become a parent or parents. Updated: 04/19/2022
Create an account

In today's lesson, we are going to make a baby. Wait, that didn't come out right. We are going to study the social and evolutionary processes that go into the creation of genetic offspring. There, that sounded more academic.

The process of starting a family is complex, but very important in both evolutionary and social terms. There is a lot that goes into this; from why we choose to start a family and who we choose to start one with, all the way to what we expect that family to look like. There are rules and expectations and hopes and disappointments that go into this. It sounds messy, but hey, that's life. 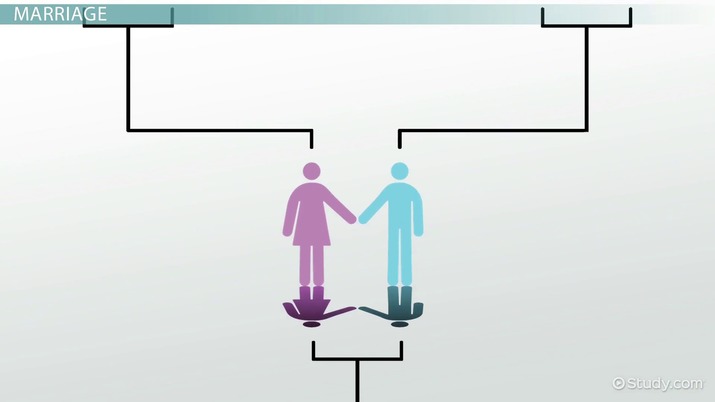 Coming up next: Types of Family & Kin Relationships

The first step in starting a family is picking a partner. Mate choice is defined as the process of mate selection based on the desirability of their traits. Mate choice is considered to be an important part of evolution and a way that species pass on the most desirable traits for their survival.

There are several qualifications that affect mate choice. Just think about all the things that go into your decision to date someone. Physical traits are one common qualification. This could refer to traits that indicate evolutionary benefits, like strength or speed. It could also be determined by what a certain culture finds physically attractive, from a symmetrical face to small feet to a rotund belly. Other qualifications could include intelligence, creativity, personality, and social standing.

After a person has developed an interest in someone, they begin the process of getting to know that person hoping to generate a more intimate, perhaps committed relationship. We call this dating; social scientists refer to it as courtship. During the courtship phase, the relationship has not achieved the status or recognition of being completely official, not like a marriage. However, couples in courtship are considered to be more tied to each other than, say, strangers on the street. It's sort of an in-between phase.

The expectations of courtship are completely different by culture. In some places, the couple is always watched by a chaperone. In others, they are given freedom to get to know each other alone. Gifts are often an important part of the courtship process, from flowers and chocolates to goats. The various practices that a culture expects through this period are called courtship rituals. Traditional American courtship rituals extend from dinner and the movies to asking a woman's father for a blessing of marriage.

So, the couple has met, they went through the courtship phase, and they have decided to get married. Now the fun really starts. Anybody who's been married knows what a process this is. Traditionally, marriages are one of the most actively celebrated social events throughout human history. Marriages represent the uniting of families, the continuing of a family line, and future prosperity, since it was traditionally associated with having children. A marriage celebration is often large, lavish, and directly involves the entire family.

In most cultures, marriage is the act that officially severs the two individuals from their old families and unites them as a brand-new family. This is often seen as a sacred thing. As with the rest of this process, aspects of marriage are determined by culture. In some places, the marriage ceremony must be done in a very specific way for it to be legitimate. Additionally, the expectations of each person in the marriage are culturally defined. How do you treat your spouse? What are your obligations to them? What are theirs to you? All of this comes down to cultural values. As the concept of family evolves, marriage is not always deemed necessary by some people as a required step in forming a new family.

Traditionally, the final goal of this entire process is to have a child. From both social and evolutionary aspects, childbearing is beneficial and important. However, this can also be a time of great stress, depending on social pressures. If a society greatly values sons, or inversely values daughters, the pressure is often on the woman to produce the correct offspring. Similarly, the female's relationship with her family, her spouse's family, and the society overall may create expectations for the child before he or she is even born.

Pregnancy is also accompanied by several rituals that cultures practice to help the mother, ensure a healthy child, or ease childbirth. In our culture, the baby shower is an example of a frequent, expected custom. Here, the goals are emotional support for the mother as well as the giving of gifts that will help the family after the child is born, like diapers. Other cultures around the world and across time have had their own rituals, from magical ceremonies to protect the baby to buying livestock for the child to someday farm. This last step in the process of creating a family varies in time as a birth couple or a couple with a surrogate may experience the full pregnancy of nine months, but an adopting couple may experience less or more time depending on the adoption process.

In all creatures, keeping the species alive is a top priority. Every species has its own rituals, and humans are no exception. This lesson's focus is on the process studied across multiple cultures but is not absolute in defining every individual's process when deciding to become a parent.

The first step is mate choice, or the selection of a desirable partner. Choosing a partner can be done with several criteria, from physical appearance to intelligence to social standing and wealth.

After that, the couple is in a period of courtship, roughly meaning dating. This looks different in every culture, and there are expectations on both individuals about how to act.

If the courtship is successful, it results in a marriage. In marriage, the two individuals are socially, legally, and spiritually formed into a new family. This is often accompanied by major celebrations in accordance with the customs of that culture.

Traditionally, the expectation was that marriage would result in childbearing, or pregnancy. By the time the child is born, society already has expectations, plans, and gifts for him or her.

So there we go. It's a long and complex process, but we did it.

Studying this lesson could influence your ability to:

Relationship Between Sociology & the Social Sciences