Mathematical development in children begins as early as the child's first year. Learn about what mathematical understanding and development might look like at ages one and two, ages three and four, ages five and six, and ages seven and eight. Updated: 11/17/2021
Create an account

Ages One and Two

Ask any parent about their young child and you'll invariably hear that they grow up so fast. And, it is very true. Parents can see how quickly their child's comprehension of the world around them grows and expands with each day. Along with this exploration of the world around them, their children are also growing in their math skills. In this lesson, we'll look at the mathematical development in young children ages one through eight. By mathematical development, we mean the process of growing in one's understanding of math.

One- and two-year-olds, for example, may know how to ask for more when they want more of something, such as more cookies or more food. By the end of the second year, some children understand the numbers 1 and 2 and will be able to get you two wipes when you ask them. Some children will also be able to hold up two fingers to show their age. Some two-year-olds will also begin reciting the counting numbers although they will mess up with the higher numbers.

When it comes to geometry, one- and two-year-olds begin to figure out how some shapes are the same, such as circles, squares, and triangles. Also, within this age range, children begin to stack building blocks together.

Children in this age range will also begin to notice size and volume differences. Some will use the words 'big' and 'small' correctly to describe things. They'll also notice patterns, such as a bath coming before bedtime and where things are located, such as the lotion and soap are always in the bathroom. 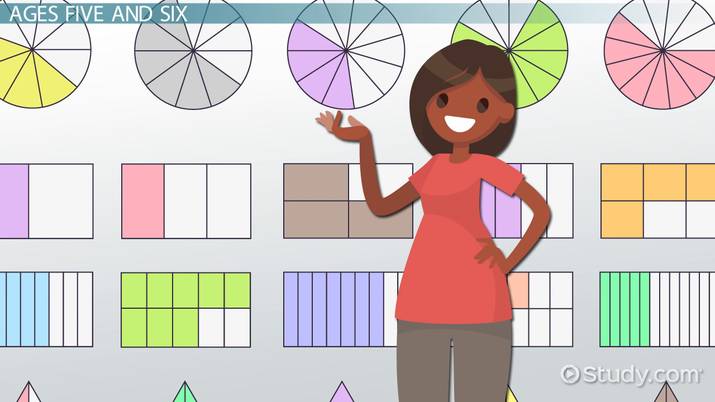 Coming up next: Mathematics Assessment Strategies in Early Childhood

When a child reaches three and four years of age, they increase their number knowledge to include 1, 2, 3, 4, and 5. Some can count to 10, and some can go all the way to 20. They'll also be able to do basic addition and subtraction of small numbers.

Knowledge of shapes becomes more apparent in this age range, as children will be able to name and identify various shapes in various orientations.

Children will also get better with their measurement skills, realizing that getting one more cookie means they have more cookies while giving one away means they have less cookies. They'll also begin to measure objects with other objects. For example, they might measure a big teddy bear with sticky notes.

At ages five and six, children increase their number knowledge even more up to 10. This also includes performing basic addition and subtraction problems up to 10. Some children can even solve basic word problems, such as: Peter has 3 rabbits and Susan has 5 rabbits. How many more rabbits does Susan have? It is also during this age that children begin to understand fractions.

During this age, geometry skills also improve, with some children being able to make shapes by combining shapes. An example is making a square by combining two triangles.

Their knowledge of patterns also increases. They are now able to create their own repeating patterns, and some will understand that one object can have the same value as several objects of another item. For example, they will realize that 1 nickel can be traded for 5 pennies because they have the same value.

At ages seven and eight, children are now in school. Their grasp of numbers has now increased to the triple digits, and they can perform basic math along with word problems. They'll be able to count by skipping 5 at a time, or 10 at a time, all the way to 100. It is at this age too that children get better at estimating the number of objects in a jar, for example.

Children this age can use a measuring stick or other tool to measure. They'll be able to place the tool down in increments to measure a large distance.

Here is a table summarizing the information in this lesson:

How to Create a Mathematically Rich Learning Environment

Strategies for Teaching Students with Dyscalculia

What is Curriculum in Early Childhood Education?