In this video lesson, we are going to see how Euler paths and circuits can be used to solve real-world problems. You will see how the mailman and the salesman make use of these paths and circuits. You will also be presented with a seemingly complex problem to see if such a feat is possible. Keep watching!

An Euler circuit is a circuit in a graph where each edge is crossed exactly once. The start and end points are the same. All vertices must be even for the graph to have an Euler circuit. Let's get on with the problems now. 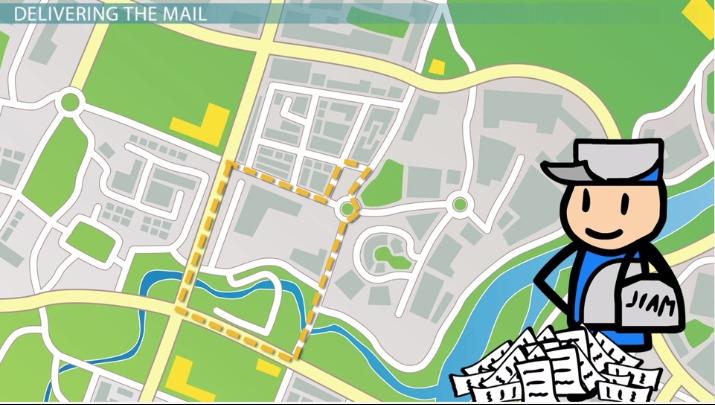 Coming up next: Euler's Theorems: Circuit, Path & Sum of Degrees

Our first problem deals with delivering the mail. Imagine our postman with a stack of mail in his hand. He needs to deliver this mail to addresses on five different streets. He looks on the map, and he sees how the roads connect with each other. He draws a simplified version of the map. He marks each intersection with a number. Since he has a car, he would like to end at the same point where he began.

To make the best use of his time, he needs to walk each road just once. Can he do so and if so, how?

Looking at his graph, we see that yes, it is possible to walk each road just once. He can park his car at intersection one, walk to intersection two, then three, then four, then five, and then back to one. Doing this, he will have walked each road only once. Since he ended up where he began, he actually walked an Euler circuit.

Now, let's look at the traveling salesman problem. His is similar to the postman's. Since our salesman travels, he doesn't mind ending up at a different point from where he began. But just like the postman, he wants to make best use of his time and travel each road just once. This salesman did what the postman did and drew a simplified version of the roads he wants to travel.

He also has five roads to reach. Can he go through all five roads just once? Yes, he can. If he begins at point three, he can then go to point two, one, five, four, and then one again. He will have visited all five roads just once. Since he ended up at a different spot from where he began, he has traveled an Euler path. Are there more Euler paths that our salesman could have taken? Yes, there are. Can you spot them?

The Seven Bridges of Konigsberg

Here we have a map of Konigsberg and its seven bridges back in the 1700s. The problem posed to Euler was that of being able to visit all the bridges but crossing each bridge only once. Yes, we are looking for an Euler path or an Euler circuit. How can we go about solving this problem? We can begin by making a simplified graph of our bridges. We will mark each land area as a point.

We have four main land areas, and so we end up with four points. We have drawn the bridges as lines connecting these points. Now, the question is can we pass all of these lines just once without skipping? Well, let's analyze our graph for just a minute. We see that each vertex of our graph is actually odd. The point to the very left has five lines coming out of it, while the rest have three. What do we know about the vertices of graphs with Euler paths and circuits in them? Recall that a graph with an Euler path can have at most two odd vertices, while a graph with an Euler circuit must have none. Since we have four odd vertices in our graph, this means that there is no solution to our problem, since the number of odd vertices exceeds the permissible for either graph.

An Euler circuit is a circuit in a graph where each edge is crossed exactly once. The start and end points are the same. All the vertices must be even for the graph to have an Euler circuit.

Euler paths and Euler circuits are used in the real world by postmen and salesmen when they are planning the best routes to take. There can be multiple routes that they can take given a graph of the roads they need to pass by.

How many times are you allowed to pass an edge in an Euler path or circuit?

Methods of Finding the Most Efficient Circuit

Huntington-Hill Method of Apportionment in Politics

Jefferson's Method of Apportionment in Politics

The Borda Count Method in Elections

Adams' Method of Apportionment in Politics

The Quota Rule in Apportionment in Politics