Math Is a Language of Symbols

Imagine that you have a pet hamster that hasn't stopped growing since the day you got it. To track and analyze its amazing growth, you'll need to use a range of mathematical symbols. In math, symbols are concise ways to show mathematical relations and operations.

In this lesson, we'll stick with the symbols that you'll see most often. Remember, if all else fails, you can always write things out in words, but make sure to ask someone about the correct symbol later. 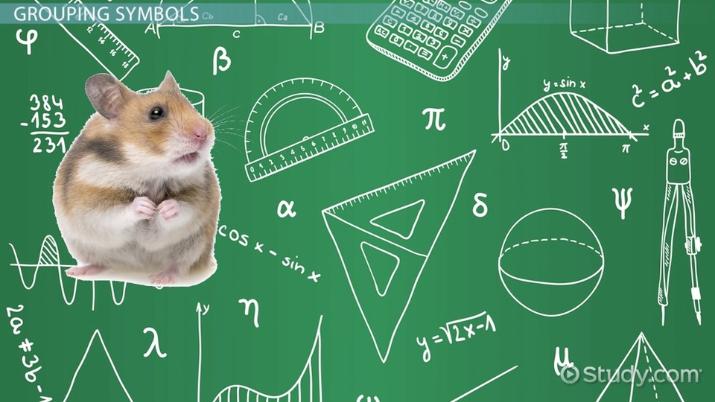 Coming up next: Arithmetic with Whole Numbers

To get a true idea of your giant hamster's scale, you'll need to show how its size relates to other quantities. Relation symbols tell us how one expression, a mathematical representation of a quantity, relates to another expression. You probably know the equal sign: =. It tells us that the expressions on both sides of it are exactly equal to one another. So, you could say your hamster's weight equals 205 pounds.

While that gives an exact value for its weight, you could use this sign, which means that the expressions are only approximately equal:

For example, your hamster may be approximately equal in size to a baby elephant.

These show which expression is less: each symbol points to the lesser expression.

These signs include the amount itself, whereas greater than or less than refer to numbers right up to, but not including, that exact amount. Think of the difference between your hamster being at least 200 pounds and greater than 200 pounds.

As your hamster continues its alarming growth, you'll need to know basic arithmetic symbols. We know that + means addition, and - means subtraction, and you can use these symbols to show how its size has changed.

But, what if you wanted to convert its weight from pounds to another unit of measurement? In that case, you'd use multiplication or division. However, we can't always use this common multiplication symbol because it may sometimes be confused with the variable x:

Instead we use the asterisk: *

Or we can use a dot:

Similarly, we can either use this symbol to represent division: ÷ or a slash /.

Along with these goes this symbol that stands for either adding or subtracting the value that comes after it: ±. If you noticed that your hamsters eats about 40 pounds of cabbage a day, but sometimes he eats 35 or 45 pounds, then you could say that he eats 40 ± 5 pounds a day.

As your hamster calculations become increasingly complex, you'll need grouping symbols to help you figure out the order of operations.

Parentheses also have some specialized meanings. When we write f(x), this does not mean f times x. It means the value of the function f when the input value is x. Parentheses are also used to show the coordinates of a point on a graph, like this: (3,2). When we write 3,2 we are making a short list with the numbers 3 and 2.

Hopefully, your hamster isn't experiencing exponential growth. Just in case, we can raise an expression to any power by using the exponent symbol, which looks like this:

The small number is the exponent. This example means x-squared.

We can also have fourth roots, fifth roots and so on.

It might be that your hamster never stops growing. Hopefully that's not the case, but even if it is, we have a symbol for an infinitely large number. We call it infinity:

There's also a number with an infinite number of digits, which we get by dividing the circumference of any circle by its diameter. We call it pi:

Just to make sure you have all the tools you need to keep track of your hamster's size, here are some symbols that don't necessarily fit into the previous categories.

The factorial symbol is even easier. In math, we use an exclamation point to denote factorials (!). This just means multiplying that number by every integer that comes before it until you reach 1.

On the other hand, something like this can be quite difficult to type:

Say you want to do more than just measure your hamster's weight every day. You want to measure its change over time and predict what that change will look like. This is where calculus and its symbols can be of use.

Delta stands for how much a variable has changed or the difference between two measurements. This is what the symbol looks like:

In calculus, we also have symbols called limits.

For example, we'd write this out as the limit, as x approaches a, of f(x).

Integrals are a fundamental component of calculus. Definite integrals that look like this can be written out as words: the integral from a to b of f(x) with respect to x:

Indefinite integrals like this one are similarly written out: the integral of f(x) with respect to x:

Whether or not you own a giant hamster, we need to recognize and understand math symbols so that we can understand what other people are writing, and so we are able to write the symbols ourselves. We have symbols for relations like <, >, = and so on for the basic operations. We have grouping symbols that can work together (or, in the case of parentheses, that have some special uses). We have symbols for special values like pi and infinity, for roots and powers, other special operations and for calculus notation.

After reviewing this lesson, you should able to identify and describe the purpose of various mathematical symbols.

Jefferson's Method of Apportionment in Politics

What is Data Management? - Definition & Tools

Fibonacci Sequence List & Examples | What is the Golden Ratio?

Critical Thinking and Logic in Mathematics

What is the Golden Ratio in Math? | Formula & Examples